Welcome to Season 9, Episode 8 of the Unconventional Preview, a serious-yet-lighthearted, nostalgia-tinted look at the Patriots’ weekly matchup.

The last time the Patriots faced the Jets was Week 7 last October, which was not that long ago on the calendar but might as well be eons ago in terms of the aspirations of this franchise. The Patriots throttled the Jets in a “Monday Night Football” matchup like this one, 33-0, holding the Jets to 154 total yards, forcing six turnovers, and leaving poor Sam Darnold muttering on the sideline about seeing ghosts. It was one of the Patriots’ most satisfying routs of the Jets, at least among those that didn’t include a buttfumble.

The defending Super Bowl champions improved to 7-0, with the win, and it was very easy to dismiss Tom Brady’s concerns about the offense as nitpicking from a perfectionist. The Patriots problems seemed few, and it was easy to assume they’d be fixed, just as they almost always were. There were no indications, at least for us to see, of the storms ahead.

It was the kind of systematic dismantling of an inferior team that became so familiar during the dynasty; they rarely played down to the level of an inept opponent. We couldn’t have known then that sundown was coming for the dynasty.

But that’s what happened. The Patriots won the next week, beating the Browns by two touchdowns. The Patriots got overpowered by the Ravens the week after that, falling to 8-1, and nothing has been right for very long since. They finished the ’19 season with losses in four of their final six games, including in the first round of the playoffs to the Titans. Brady bolted for Tampa, where he’s doing a fine job as quarterback, offensive coordinator, and general manager. The team he left behind is 2-5, an afterthought in the playoff race, and the league-wise schadenfreude regarding their status is both palpable and understandable.

And so this is where we are with the Patriots today: They’re facing a winless Jets team that is wretched even by its own historical standards — their 1997 team that went 1-15 is the ’78 Steelers compared to this crew — and yet we’re not 100 percent convinced the Patriots will emerge victorious Monday night.

Oh, they probably will. The Jets are last in total offense (259.0 yards per game), and 26th in total defense (398.9 yards per game). They’re chronically terrible, though starting never-elite Joe Flacco in place of the injured Sam Darnold might actually be an upgrade this week.

The Patriots, meanwhile, have lost four in a row for the first time since 2000. They’re coming off a 24-21 loss to the first-place Bills in which they played with inspiration in the second half, only to watch potential victory slip away on a Cam Newton fumble in the final minute. This team has been hapless lately, but they’re not Jets-level hopeless. A confirmation of this would be welcome Monday night.

Jakobi Meyers: When Meyers popped in training camp last season an undrafted free agent and built a quick rapport in the preseason with Jarrett Stidham, I figured it was a case of a player thriving with the junior varsity who would fade to the background when the upperclassmen took the field. That’s pretty much the way Tom Brady treated him, too, having seen the likes of preseason mirages Brian Tyms, Bam Childress, and Zach Sudfeld come and go through the years. But Meyers made the club and made the most of his limited opportunities (despite Brady’s apparent enduring skepticism), catching 26 passes for 359 yards. Meyers’s opportunity was slow to come this season, with the Patriots giving 2019 first-round pick N’Keal Harry every chance to prove he was not a bust in the making. Harry did little to help his cause before suffering a concussion early in the loss to the Niners. In his absence the last two weeks, Meyers has been the single bright spot in a dismal passing game, catching 10 passes for 118 yards over the last two games while achieving the high-degree-of-difficulty feat of consistently being on the same page as Newton. I’m not saying the lanky Meyers is the next coming of Herman Moore, but it wouldn’t be a shock if he’s the team leader in receptions at season’s end.

Frank Gore: At age 22, second-year defensive lineman Quinnen Williams is the best player on the Jets and almost certainly the one with the brightest future. But the player with the best chance at being a Hall of Famer is 15 years Williams’s senior — and frankly, someone who is a lock for Canton even if the majority of fans probably don’t see him in that light. Gore, now 37, in his 16th season, and playing for his fifth team, has more career rushing yards (15,687) than the hallowed likes of Curtis Martin, Tony Dorsett, and Eric Dickerson. He has more than Barry Sanders, LaDainian Tomlinson, and Earl Campbell. He has more than Jim Brown. The only running backs in pro football history that have gained more yards on the ground than Gore are Emmitt Smith (18,355) and Walter Payton (16,726). While it makes little sense for the rebuilding Jets to be playing a veteran such as Gore, he’s been competent (340 yards, 3.5 yards per carry) on a team lacking in that characteristic. He’s wearing the green and white now, but he’s getting a mustard-colored jacket someday, presuming he ever actually retires.

Damien Harris: If there is any one thing to be pleased about with this team right now, it has to be Harris’s emergence as a reliable and relentless option in the running game. The second-year back chugged and whirled his way to his second 100-yard game of the season (102 yards on 16 carries, including 85 yards after halftime), his first coming in his 2020 debut in the loss to Kansas City (100 yards on 17 carries). Here’s to increasing his workload into the 20-carry range against a Jets defense that ranks 14th in the league against the run (116.1 yards per game).

I’m not asking why Adam Gase has a job at this moment. The Jets are tanking to be in a position to draft Clemson star Trevor Lawrence, and having an expert loser in Gase — who has more double-digit losses (33) than wins (30) in three seasons with the Dolphins and 1½ with the Jets — helps that cause. I’m asking how he ever got a second job in the first place after mismanaging a Dolphins team that had the likes of Ryan Tannehill, Kenyan Drake, and DeVante Parker. That endorsement Peyton Manning gave him years ago has gotten him at least one job he didn’t deserve, and probably two.

In the final minute of the first half of the Patriots’ eventual 36-20 win over the Raiders in Week 3, quarterback Cam Newton faked a handoff to Julian Edelman and flipped the ball out to Rex Burkhead in the right flat. Burkhead took it from there, following a monster block from Shaq Mason and crowd-surfing his way into the end zone to give the Patriots a 13-3 lead.

It went down as Newton’s second touchdown pass of the season. We never would have thought then that four games later we’d still be waiting for his third.

Newton, of course, missed the Week 4 matchup with the Chiefs after testing positive for COVID-19. In the three games he has played since — losses to the Broncos, Niners, and Bills — he has thrown five interceptions, bringing his season’s total to seven, and fumbling three times.

While he was more efficient throwing the ball in the second half against the Bills, going 8 of 11 for 81 yards while building that rapport with Meyers in particular (even connecting on a 2-point conversion), he still didn’t find the end zone via the air.

This is the week that ignominious streak should meet its demise. The Jets’ pass defense has allowed a league-worst 71.9 completion percentage to opposing quarterbacks, with 16 touchdowns and 7 interceptions. The only defenses that had allowed more total yards (2,262) through the air entering Sunday were the Seahawks (2,511) and Falcons (2,491). Only eight teams have allowed more than those 16 touchdowns.

The pack of anti-Revises in the Jets defense backfield — safety Marcus Maye is the best among a group that allowed five touchdown passes to the Chiefs’ Patrick Mahomes last week — allows an opposing quarterback rating of 104.5 this season. Tom Brady’s rating this year for the Bucs is 103.1. If Newton can’t get it going Monday, it’s reasonable to suggest he never will this season.

PREDICTION, OR WESLEY WALKER WAS NO STANLEY MORGAN

Beyond the bizarre happening, like the Patriots turning over the ball a half-dozen times or something, it would appear there is only one logical path to victory for the Jets: By running the ball consistently and effectively against a Patriots defense that has issues on the defensive line and at linebacker. (I’d call it the front seven, but it’s really the front five or six in these pass-happy days.) The Patriots, who currently rank 27th in the league in run defense (140.4 yards per game), couldn’t stop the Niners from running all over them two weeks ago, allowing 197 yards and four touchdowns on the ground. Last Sunday, the Patriots weren’t much better, with the Bills running for 190 yards and a pair of touchdowns, averaging 5.0 yards per carry. The Patriots have struggled to set the edge, which is one reason Chase Winovich’s playing time has dwindled. The Jets’ running game, led by Gore and La’Mical Perine (150 yards, one TD), isn’t exactly reminiscent of Curtis Martin’s heyday, but rookie left tackle Mekhi Becton is already a force — he rag-dolled Chiefs star Frank Clark last week. The suspicion here is that the Jets will gain more rushing yards than their previous production suggests they should, but they won’t be able to do enough to earn their first win. The Patriots’ losing streak ends, but many questions will remain. Patriots 23, Jets 12. 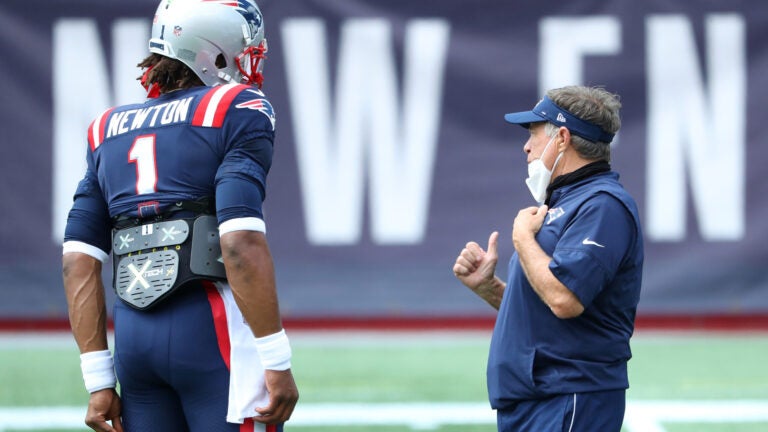