They may have needed all 60 minutes to do it, but the Patriots are back in the win column after defeating the Jets 30-27 on Monday night.

Outside of ending its four-game losing streak, the other good news for New England was that Cam Newton had one of his best games of the season in the win. He completed 27 of 35 passes for 274 yards plus he rushed for 16 yards with two rushing touchdowns.

He also came through in the clutch Monday night. With the Patriots down 10 entering the fourth quarter, Newton led the Patriots to 13 points, including a drive that set up Nick Folk to kick a game-winning 51-yard field goal as time expired.

“The last couple of games, it kind of builds character,” Newton told reporters after the game. “We did a great job with situational football. Trailing at halftime but just being resilient and battling back as an offense. Being able to still run the football, keeping everything in the wheelhouse of this offense. For us to put opportunities into points is something we’ve been harping on and working on all year. The work we showed today was good, we just got to keep building on it.”

Newton had previously been 1-38 in situations when his team was down by double-digits entering the fourth quarter in his career, according to ESPN Stats & Info.

More importantly, Newton didn’t commit a turnover on Monday. In the three games since he returned from testing positive from COVID-19, Newton had committed six turnovers, concluding with a fumble on a drive that could have tied the game or even given the Patriots the lead last week against the Bills.

Newton felt his performance was holding the team back over the last few games.

“I’m getting tired of sucking, simple,” Newton said. “I am a competitor, you know what your standard is. Taking pride in your work, that’s what it comes down to. You not being able to hold your head up because you’re thinking too much that’s one thing. But at the same you’re solely responsible for the performance you put up. I was extremely disappointed. I just did my job today.”

“I’m more relieved of not having the feeling of losing because there’s a lot of people in that locker room that deserve more than what we have been showing,” Newton later added. “A lot of our fans have been let down. The lackluster performances of myself – amongst other people. I can only speak on myself, and I will. This is a game we can build off of and we will build off of it. That’s a good thing.”

For the first time this season, the Patriots’ offense scored points in the first quarter. Newton led the team on an eight-play, 75-yard drive on their first possession, completing all four of his passes before running the ball in for a five-yard touchdown to take a 7-3 lead.

“I was more pleased with how we came out of halftime and to start the game with points,” Newton said. “That’s a key to victory every week for us each and every week. We want to score when we first get the ball. We want to start fast. That was a point of emphasis for us this week as well as coming out of halftime. We wanted to put points on the board, preferably touchdowns. And we did that.”

In addition to playing turnover-free, Newton was not sacked at all by the Jets. As a matter of fact, the Jets blitzed Newton on 69 percent of his dropbacks, which is the second-most he’s faced in a game in his career, and he wasn’t sacked once. He also completed 75 percent of his passes in those situations, all according to ESPN Stats & Info.

Newton credited his offensive line, especially for giving him room for quarterback sneaks. One quarterback sneak resulted in a touchdown that tied the game at 27, and another gave the Patriots five yards on the game-winning drive.

“Dave Andrews – Dirty Dave,” Newton said on why the quarterback sneaks worked. “That play’s always successful when your centers or guards – Shaq Diesel (Shaq Mason) or Smokn’ Joe (Joe Thuney) – can get some kind of surge. For me, being as big as I am, it’s just a lunge forward. I just want to be as efficient as running the QB sneak as possible. Those guys did the hard job. It’s just on me to get the clean snap and fall forward.”

It also looks like Newton found good chemistry with one of his wide receivers. After catching six passes for 58 yards against the Bills, Jakobi Myers caught a career-high 12 passes for 169 on his 24th birthday Monday night.

Newton and Meyers actually have a history that goes way back before this season. Meyers was a quarterback in high school and attended Newton’s camp back then. Newton, who called Meyers his “germs,” believes Meyers’ days as a quarterback help him as a receiver.

“For him to be able to throw as far and as hard as he used to throw and for him to be able transverse to the receiver position, I knew he’d have success because playing the quarterback position makes you intellectually sound,” Newton said. “(It makes you) cerebral by default because you know what a quarterback is looking for. He’s such an easy target to throw to, as you can kind of tell, and he just finds a way to get open. He has a knack for the ball. His decisiveness while running routes. It’s easy to tell where his body language is going to go.

“For him to have the kind of performance he had tonight, while going with these last couple of weeks, it’s just a show of hard work paying off.”

Cam keeps the play alive and SOMEHOW finds Meyers for a first down. Wow. #GoPats

The Patriots have a tough matchup ahead of them next week when they host the 6-2 Ravens. For now, Newton is just happy to get back in the win column.

“I’m not going to lie, it felt good,” Newton said. “But at the end of the day, we’re in a position where this is a division game. A much-needed win for multiple reasons. Not only for the division but also for our confidence. We just needed one in our opinion. We’ve got a strong feat coming up here this weekend. We’ve just got to get healthy and just pair it with a great week of practice and we’ll be alright.” 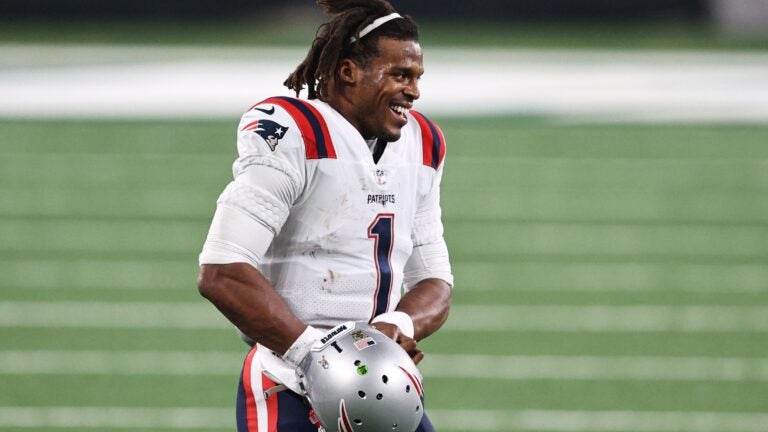