Eleven thoughts on the Patriots’ 30-27 win over the Jets …

1. If you can make crisp sense of this one immediately after all of that, well, here you go. Seize my keyboard, and set me straight, because my feelings are scrambled, friends. I cannot recall ever having more contradictory feelings after a Bill Belichick era Patriots game than this. For much of the game – most of it, really, until the Jets started doing all those usual numbskull Jets things in the fourth quarter, the Patriots were being embarrassed by an 0-8 punch line of a team that somehow looked like its superior in talent and competency. Yet when the Patriots offense came to life just when the season appeared to be ready for its last rites, drove to tie it on Cam Newton’s touchdown plunge, and then won it on ex-Jet Nick Folk’s 51-yard field goal at the buzzer, it actually felt like a satisfying, meaningful win, even if the stakes were considerably lesser than we are used to around here. No, it didn’t mean much, or shouldn’t have, other than that they ended their own four-game losing streak and avoided losing to one of the worst teams in recent NFL history. Yet the Patriots players, whose resilience was rewarded, were practically overjoyed afterward, and it was cool to see. It would be pretty easy for us to give up on them, but they clearly have not given up on themselves, even at 3-5. I guess that’s the weird new world we live in now, where squeaking one out against a lousy team is … fun? Yes, that’s it. That was fun.

2. If this game had ended after three quarters, it would have been very tempting to make the argument that Joe Flacco – who started for injured and still-haunted Sam Darnold – is a better quarterback than Cam Newton at this point. I am glad there is no reason to attempt that point now. Flacco, who still throws a lovely deep ball, put up good numbers (18 of 25, 262 yards, three touchdowns, one interception), but in the fourth quarter he reminded us of why he’s at the Veteran Backup For The Lousy Jets stage of his career. The Jets ran just four plays from scrimmage in the fourth quarter – a Flacco heave that was picked off by J.C. Jackson after the Patriots had just cut it to 27-20 with 6 minutes left, and a three-and-out after Newton’s tying 1-yard touchdown run with 2 minutes left. Flacco was so bad in the fourth that one might wonder if he had been possessed by Darnold.

3. The biggest reason that a close win against a terrible team managed to be satisfying was that Newton got a little bit of redemption for his recent bad breaks and blunders. He led them on a 17-play drive to start the fourth quarter that ended with a Folk field goal, cutting the lead to 27-20. Then, after the Jackson pick, helmed an 11-play drive that he punctuated with his second rushing touchdown of the night and eighth of the season. The ending assured that it was easily Newton’s best game as a Patriot. He hit his first 11 throws, and finished 27 of 35 overall for 272 yards, two touchdowns, and no interceptions. Yeah, they’re just 3-5, and it’s just the Jets, and their problems are myriad and obvious. But Newton deserved this moment, as small in the grand scheme of things as it might be.

4. We can all agree on it now, right? Jakobi Meyers is good, yes? Maybe not starter-on-a-championship-team good, and certainly not No. 1-receiver good, but at the very least crafty, reliable target who can at least be a quality third receiver and maybe more than that. Meyers delivered the game of his young career, catching 12 balls for 169 yards while constantly finding holes in the middle of the Jets’ defense. He wasn’t flawless – he ran himself out of a first down in the fourth quarter by trying to gain a couple of extra yards – but he was dependable, and yes, quite good. Those who saw it in training camp last year were right. The Patriots have something here.

5. Pardon me for my ignorance when it comes to football analytics, but are there advanced stats in football that adjust for comparison across eras, similar to how baseball has metrics such as OPS-plus? If not, someone much smarter than me needs to cook them up. Because when someone like Joe Flacco passes Joe Montana in career passing yards, as he did in the first half Monday night, there needs to be a way to give a little more credence to far superior players that played in a less pass-happy era. Get to work on that.

6. It was fitting that it was a long pass – a 50-yard bomb to Breshad Perryman – that moved Flacco ahead of Montana and into 20th place on the all-time passing yardage list. (Up next: the legendary Kerry Collins, somehow). The one thing Flacco did at an elite level in all those years as the Ravens starter is throw the deep ball … even if sometimes the intent was just to draw a flag. I wonder how many yards Flacco and his receivers have drawn on pass interference penalties in his career.

7. Turns out the Patriots are permitted to score an offensive touchdown in the first quarter. One could be excused for wondering if there was some obscure rule change working against them after they failed to do so through the season’s first seven games. It was Newton who got it done, plowing in from 5 yards out to cap a nifty first possession that included four runs, four passes, and a smooth 33-yard completion to Meyers.

8. Though 37-year-old Frank Gore and second-year back La’Mical Perine are hardly the football reincarnations of Curtis Martin and Freeman McNeil, the assumption here was that the Jets would come out running the ball behind 6-foot-7, 363-pound rookie left tackle Mekhi Becton. And for a while they did, with Becton, who looks like Ted Washington playing left tackle, clearing paths for Gore and Perine on the first three plays from scrimmage. So it seemed a break for the Patriots’ defense when Becton exited with approximately a minute left in the first quarter with what was later revealed to be a chest injury. I do wonder if that led to a change in game plan for the Jets.

9. J.C. Jackson is one of the Patriots’ best players, but a football novice who was watching this game would never have known that through the first three quarters. He was beaten by Perriman on the bomb in the first half after getting flagged for pass interference on the previous play. Then he gave up another touchdown to Perriman in the third quarter that put New York up 27-17, getting completely faked out by the receiver at the line of scrimmage. He did get some revenge with the fourth quarter interception on a terrible Flacco overthrow, and now leads the NFL with five interceptions.

10. The Patriots were without a number of regulars, including cornerback Stephon Gilmore. defensive tackle Lawrence Guy, and linebacker Ja’Whaun Bentley, as well some depth pieces and anything resembling a starting tight end. Still, it was hard to look at some of the obscure names on the stat sheet – Terez Hall (who actually had six tackles), Carl Davis, Nick Thurman, and so on – and not have flashbacks to all of the Jeff Paulks and Antico Daltons that had late season auditions for Belichick’s first Patriots team in 2000.

11. Good to see former Patriot Harvey Langi having some success with the Jets. Langi and his wife Cassidy were seriously injured in a car accident during his rookie season with the Patriots in 2017. He played just one game for the team, got cut at the end of  camp in ’18, and caught on with the Jets, playing all 16 games last year. He had 10 tackles last night, including a big hit on Damien Harris in the first quarter. 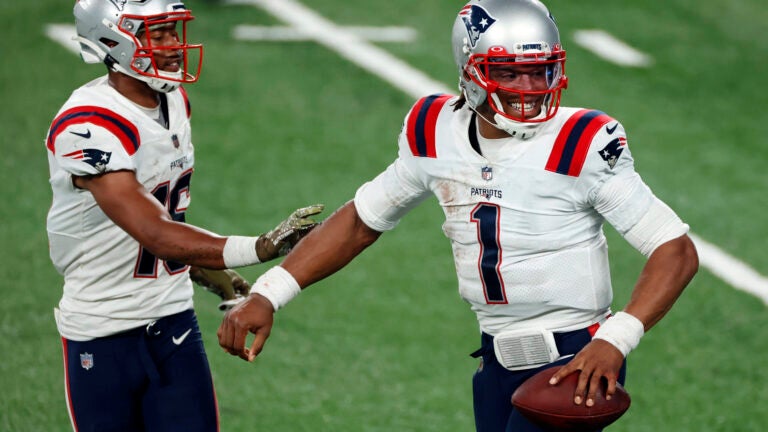 ‘I’m getting tired of sucking’: Cam Newton relieved after slump-breaking performance in win against Jets