The blossoming connection between Jakobi Meyers and Cam Newton is not something that many would have predicted coming into the season. It’s an unusual sight, seeing a quarterback with Newton’s resume relying so heavily on a second-year wide receiver who played quarterback in college and went undrafted.

But the unlikely pairing was the driving force behind New England’s comeback 30-27 victory over the winless New York Jets on Monday night, and gave reason for optimism that the New England offense can start to turn things around in time to make a last-gasp push for the playoffs as they head into the second half of the season.

Newton and Meyers have a connection that first began to take shape when Meyers was 16 years old, taking part in Newton’s foundation’s 7-on-7 All-Star tournament in North Carolina, back when Meyers was a quarterback prospect.

“Where I’m from, we all looked up to Cam. It was like a super hero, honestly,” Meyers told Steve Burton on Patriots All-Access. “It was a surreal moment to meet someone me and my friends looked up to and now that I play with him, it’s just life is funny, you know?”

The story behind his on-field connection with Meyers is not lost on Newton either.

“Man, I’m extremely proud of Jakobi. He’s the person I’ve known the longest through this whole ordeal,” said Newton after Monday night’s game. “Me knowing Jakobi when he was 16, 17 coming out of high school, for both of us to be from the greater Atlanta area, for him to be morphing into the player he is today, it’s just hard work paying off for him.”

It took a while for Meyers to get an opportunity this season, only catching one pass over the first six games, and playing just 22 offensive snaps overall in that span. But injuries to Julian Edelman and N’Keal Harry have necessitated him taking on a greater role in the offense, whether he was ready or not. And Meyers made sure that when his number was called, he was ready to take advantage of increased reps.

“I’m just a young guy trying to take advantage of my opportunities,” said Meyers. “The more they give me, the more I’m going to try to do. Hopefully I can keep building and building and every week is better than the week before.”

Meyers finished with 12 catches on 14 targets for 169 yards against the Jets, including a 20-yard reception on the last offensive play of the game to get New England in position for Nick Folk to kick the game-winning 51-yard field goal.

Meyers’ 169 yards receiving were the eighth-most by a Patriots receiver in the Bill Belichick era. Only Wes Welker, Randy Moss, Julian Edelman, Troy Brown, and Brandon Lloyd have more receiving yards in a game since 2000.

Those 169 yards are also the 12th-most receiving yards ever by a Patriots player in a single game. Meyers bested Rob Gronkowski’s mark of 168 yards to get there.

According to Pro Football Focus, Meyers currently has the 10th-best overall grade among wide receivers, at 84.1.

The Newton-Meyers connection has become so strong that Meyers has established himself as a go-to player for this team, even when N’Keal Harry and Julian Edelman return. Newton clearly trusts him more now, as evidenced by Meyers’s target percentage in the last three weeks jumping from 26 percent in Week 7 to 43 percent in Weeks 8 and 9 each.

“For him to be able to throw as far and as hard as he used to throw [at NC State] and for him to transfer to the receiver position, I knew he would have success because playing the quarterback position makes you intellectually sound — cerebral by default because you know what the quarterback’s looking for,” Newton said. “He’s such an easy target to throw to as you can kind of tell. He just finds a way to get open. He’s got a knack for the ball. His decisiveness while running routes, it’s easy to tell where his body language is going to go. For him to have the performance he had tonight, on going these last couple of weeks, it’s just a show of hard work paying off.”

In the last three weeks, Meyers has the highest percentage of his team’s targets in the entire NFL. His 36 percent target share is ahead of Davante Adams (35 percent) and Stefon Diggs (30 percent). It shows Meyers’s potential, and where he could be headed if he keeps making the most of his opportunities.

“I just have to keep putting good stuff on tape and keep working to get better every day,” Meyers said after the game Monday. “It was fun just to be out there with the team and I just enjoyed every moment of it, so hopefully like I said, I can just keep building on it and keep trying to get better.”

In a season that hasn’t gone like anyone expected it to, the chemistry between Meyers and Newton is something that could potentially re-ignite this team on offense down the stretch. That the connection comes between a mentor and one of his mentees is a fun subplot in a season that hasn’t had many positive undertones to it yet. 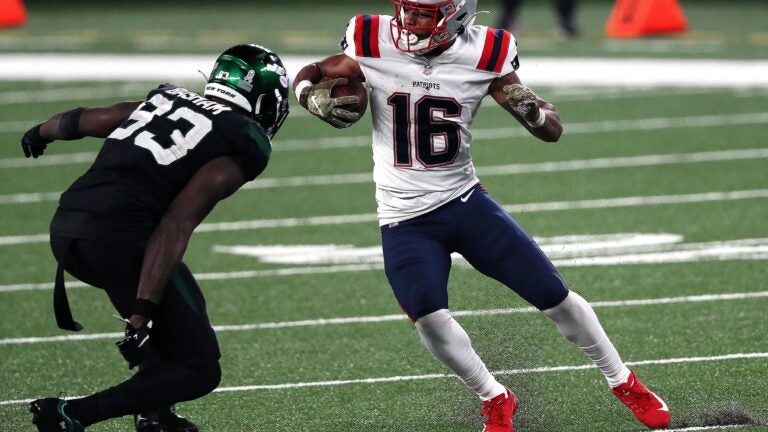 Jakobi Meyers shared some personal context around his breakout game