Another week, another impressive performance from Damien Harris.

The Patriots running back led the charge Sunday night, rushing for a new career-high 121 yards on 22 carries in the team’s 23-17 win over the Ravens. It marks the third time that Harris has rushed for more than 100 yards in the six games he’s played in this season.

Harris shared his excitement on not just his performance, but also in the team’s upset win in primetime.

“Being out there in that atmosphere and being a part of this team in such a special moment, including the weather, like I said earlier, I can’t even express to you guys how excited I am and how happy I am and just how much love I have for this team,” Harris told reporters. “How much love I have for this game. Tonight was just a real special moment in my personal career. I’ll definitely remember that for a long time.”

Harris was the key piece in the Patriots’ running game Sunday night as they ran for 173 yards as a team.  He played a big role from the start. The Patriots’ first five plays of the game were all handoffs to Harris, with the team going no-huddle after each run. He picked up 21 rushing yards on those five plays.

Harris was prepared for the physical play Sunday night as his 22 carries were also a career-high.

“I talked earlier in the week about that physical mentality and go out there and running the score and trying to run through contact and try to maximize every time I touch the ball,” Harris said.  “All of that said, it’s just to help this team win. It’s not for my personal gain. It’s not for my own individual accomplishments. I honestly don’t care how many yards I run for, how many touchdowns, how many passes I catch, it doesn’t matter to me at all. Everything I do is for the benefit of this team and to help this team be successful.

“That mentality, I’ve always tried to play like that. I’ve always tried to be a physical guy and run downhill, try to run through tackles. The team that I’m a part of and that physical mindset that’s already kind of present in here and the standard, and you’ve got to live up to that if you want to have an opportunity to go out there and help this team. I know that and I understand that. Everything I do is for the benefit of our team.”

Sunday’s game also featured some very wet conditions at Gillette as rain downpoured for much of the evening. Harris said that when he was in college at Alabama, it only rained once during his four years there. He didn’t like playing in the conditions he had to play in on Sunday.

“It’s just not my thing. I’ve never had a reason to want to play in the rain,” Harris said. “Some guys love that stuff, but I’ve always been one of those guys that preferred it to be 65 (degrees) and sunny.”

While Harris voiced his displeasure for the rain, neither he or any of his teammates fumbled or turned the ball over in the sloppy conditions. It marks the second straight week that the Patriots didn’t have a turnover, which is big because the Patriots had turnovers in every game prior to last week’s win over the Jets.

Harris remarked that with the weather and the strength of their opponent, they didn’t have much room for error.

“It definitely makes you more conscious of ball security and playing the game the right way: staying on your feet, protecting the ball, and all of those kinds of things. It definitely puts a stress on that,” Harris said. “But that’s our job as an offense, to go out there and protect the ball. Play good, sound, clean, fundamental football. We know there’s times where it’s going to be wet and it’s going to be windy. We can’t control those things but at the end of the day we can still go out there and control how we play.”

With the Patriots winning two straight and moving to 4-5, it’s reasonable to think that they could fight their way back into the playoff picture. However, Harris realized the hill the Patriots have to climb and is only taking it one week at a time, with all of his focus now moving onto next week’s matchup with the Texans.

“I will say to go out there and getting wins like this is definitely a good thing,” Harris said. “Like I said earlier, I hope we can keep stringing them together. As good as this win is, and as much as I enjoy it, and we all enjoy it, the season’s still not over. Just because we won this game doesn’t really mean anything. We’ve got to keep stringing them together. We’ve got to keep our foot on the gas, keep working and show up and get ready to work again this week.” 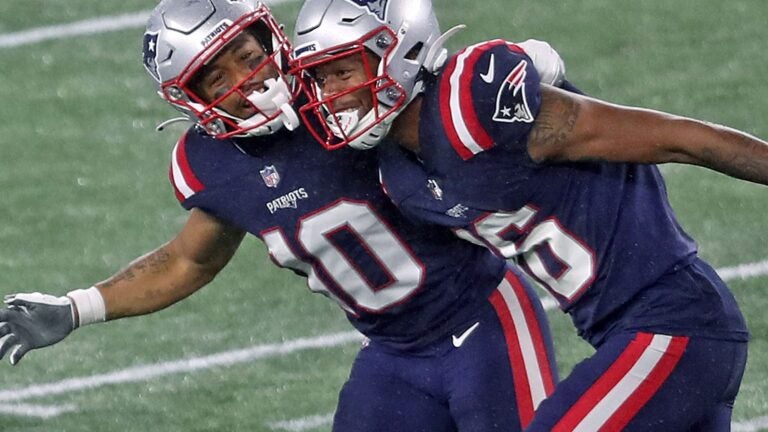 5 takeaways from the Patriots' 23-17 win over the Ravens