Sixteen thoughts on the Patriots’ 23-17 win over the Ravens …

1. Some of us (ahem) needed the lesson more than others, but make no mistake, the lesson has been learned. Even when the Patriots’ opponent looks superior on paper and in the standings, even when it feels like the season has taken an irreparable turn for the worse and the good times will be few, writing off Bill Belichick’s team against any opponent is a formal request to look like a fool. The Patriots came into Sunday’s night’s matchup with a 3-5 record, one win (against the Jets, who I believe were informally relegated from the NFL in 1989) in their last five games, and facing a frequent nemesis that that last season had sent the franchise the kind of rut they hadn’t endured in 20 years. It looked as bleak as the rainy, windy Foxborough weather, which looked like an outtake from “The Perfect Storm.”

2. So what happened? Just the kind of inspiring team-wide feat we’ve seen so many times the past two decades, but the kind thing that seemed out of reach this season. The Patriots went out and played tougher than the Ravens, running the ball down their gullets with second-year back (and budding sensation) Damien Harris gaining 121 often ferocious yards on 22 carries. Cam Newton ran for a touchdown and threw for another, and the defense brutally belted the Ravens at any and every opportunity. I don’t know if the 4-5 Patriots are a playoff team. I don’t know if what they did is sustainable. But they were the better team Sunday, and now we know what all those close early losses couldn’t confirm: they can beat anyone. They might not always do it. But they can. They can.

3. By the end of the game, the NBC broadcast looked like a combo of the foggy Bears-Eagles playoff game in ’87 and “Waterworld.” This confirmed something else: The Patriots remain a terrific lousy weather team. They did not make the fundamental mistakes that the Ravens did in the rain. Baltimore had at least three bad snaps, and two – one in a wildcat formation to Mark Ingram that killed a drive, and another later that got by Lamar Jackson – were extremely costly. The game ended on a dropped pass by the Ravens, which was fitting. Meanwhile, Newton and the Patriots did not commit a turnover.

4. Harris was the No. 1 star of the game, setting the tone with his hard running against a Ravens defense that stacked the box and may or may not have had Ray Lewis out there in Patrick Queen’s jersey. But there were plenty of unsung heroes that deserve to be sung. Many of Harris’s best runs seemed to come behind Isaiah Wynn and Joe Thuney on the left side, but the entire line set the tone against a Ravens defense that entered with the league’s No. 1 ranked run defense. Meyers, whom we should believe in now, had a huge third-and-3 conversion late and threw a touchdown pass. And Rex Burkhead just chugs along as a steady contributor, with 66 total yards and a pair of receiving touchdowns.

5. Defensively, Chase Winovich was out of the doghouse and all over the field, with seven tackles and several pressures on Jackson. J.C. Jackson locked down Marquise Brown – there’s a “Say Goodbye To Hollywood” joke here somewhere – and picked off a pass for the fifth straight game. Rookie Kyle Dugger had 12 tackles and by my accounting forced a turnover that wasn’t called (more on that in a second). And don’t forget punter Jake Bailey, who punted twice in the final 8 minutes: a 52-yarder to the Ravens 20, and a 40-yarder to their 17 with 65 seconds left.

6. I’m not sure I’ve seen the Patriots offense put together a more impressive drive than its first of the second half Sunday. The Patriots went 75 yards on four plays, in this order: Harris, behind left guard for 16 yards; Harris up the middle for 25 yards; Newton to Meyers for 26 yards; Newton behind right guard and tackle for a 4-yard touchdown run and a 23-10 lead. Big plays have been tough to come by at times this season, which is why it was so impressive to see them blast their way down the field.

7. Jackson led the Ravens on an impressive 11-play, 75-yard touchdown drive to cut the Patriots lead to 23-17 in the final minutes of the third quarter … or, I should say, it was impressive if you thought it should have been allowed to continue after the seventh play of the drive. That was when, on third-and-9, Jackson found Mark Andrews for an 8-yard gain that upon further review looked like Dugger ripped the football loose. Andrews was ruled down, and NBC officials expert Terry McAulay agreed with the decision, as former officials are wont to do when something isn’t painfully obvious, but it sure looked to these ancient eyes like the ball was hanging off of Andrews’s arm when Dugger took it.

8.  I’ve been wondering when Josh McDaniels might take page out of the Trickeration Handbook and have former college quarterback Meyers unleash a pass on an unsuspecting defense. But then, I wondered when the Patriots’ offensive coordinator was going to let Mohamed Sanu – who has thrown four touchdown passes on eight career attempts – a chance to throw last year and it never happened, so I can’t say I expected Meyers to get his chance Sunday night.

9. But he did, and did he ever make the most of it, lofting a perfectly placed touch pass to Rex Burkhead in the end zone for a 24-yard touchdown and a 13-10 lead with just over a minute left in the second quarter. Meyers is the Patriots’ No. 1 receiver right now, but as far as I’m concerned, the throw should vault Meyers to No. 2 on the quarterback depth chart.

10. The Jakobi Meyers, College Quarterback stuff did get to be a little much on the NBC broadcast, though I give them credit for their usual excellent preparation in having high school footage of him throwing the ball at the ready. After Meyers got the perfect spot to catch a Newton dart and convert and important third down in the fourth quarter, Collinsworth cited that savvy wide receiver play as something stemming from his QB days. He was awfully close to talking about Meyers like he was some combination of Doug Flutie, Cam Newton and Roger Staubach in college.

11. For those of us yelping the last few weeks that hard-running Harris needs more touches, the Patriots’ first series was a welcome appeasement. Harris carried on the first five plays from scrimmage, picking up 21 yards, as the Patriots charged into Ravens territory with runs on seven of their first eight plays.

12. Harris went over 100 yards early in the third quarter, and now has three 100-yard rushing games this season. I’m not as anti-Sony Michel as most – those six TDs he scored in the 2018 postseason do count – but with Harris running like this and Burkhead doing his thing, it’s hard to see what his role is when he returns.

13. That first drive actually sputtered out when the Patriots got away from the run. After Newton converted a fourth-and-1 with a blast into the line, he threw an incompletion on first down, found Burkhead for 4 yards on second, and then took a costly sack on third down when Matt Judon blew past right tackled Michael Onwenu, taking the Patriots out of field goal range. Those kind of mistakes – including Nick Folk’s missed extra point on the second touchdown – didn’t haunt on this night, though. The Patriots wouldn’t let them.

14. It took a series for Jackson and the Ravens’ offense to activate. But the Ravens came out full-throttle on their second series, breaking off plays of 21, 19 and 13 yards on a 13-play, 94-yard drive that ended with Willie Snead taking a forward toss from Jackson, willing himself invisible just as Jonathan Jones was about to hit him, and scoring from 6 yards out for a 7-0. Looked like it might be a long night for the Patriots at that point, but the Ravens couldn’t find that gear often in the rain.

15. The Patriots scored a first quarter touchdown for the second straight week, and in impressive fashion, with Newton leading the Patriots on a 7-play, 75-yard drive on their second possession that culminated with a 4-yard catch-and-run by Burkhead to tie it at 7. Burkhead was freed up by a mean pick behind the line scrimmage set by N’Keal Harry, who is apparently now the Kendrick Perkins of the Patriots’ offense.

16.  I respect the attempt at shade, but it is always somewhat weird to me when a team lets a marginal player be the coin-toss captain against the team he used to play for. The Ravens did this with Jordan Richards, a 2015 second-round pick of the Patriots whose prime contribution in 41 games over three seasons was reminding us that Bill Belichick has a lousy track record of picking defensive backs in the second round. Was Richards supposed to be vengeful or something? Maybe he just wanted to say hi to Patriots captain Matthew Slater? 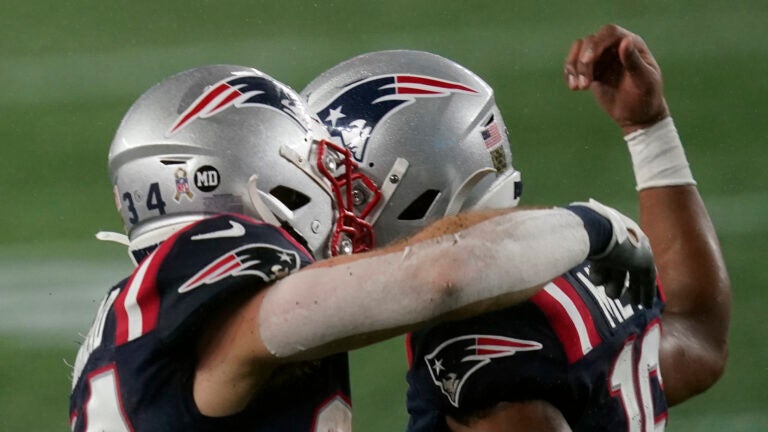