Cam Newton called it “extremely devastating.” Damiere Byrd described it as “tough to see.” James White said he was “still hurting for him.”

After Patriots running back Rex Burkhead left Sunday’s 27-20 loss to the Houston Texans with an apparent knee injury, his teammates made it clear how much they’ll miss having him on the field.

Burkhead tried to get to the outside on a rush early in the third quarter. He awkwardly made contact with cornerback Bradley Roby and was flattened by safety Justin Reid as he landed. Burkhead remained on the ground for a while, clearly in severe discomfort.

#Patriots fear RB Rex Burkhead suffered a torn ACL injury against the #Texans, according to @jeffphowe

The Athletic‘s Jeff Howe is reporting, as of early Sunday evening, that the Patriots fear he tore his ACL. Burkhead, Howe said, will receive an MRI to confirm. Howe also noted that Burkhead was having the best season of his career and was on pace for career highs in carries, yards, receptions, receiving yards, and total touchdowns.

Burkhead has six touchdowns this season, while every other running back, wide receiver, and tight end have a combined six.

His teammates were clearly crushed by the news. The quarterback Newton, who has developed a rapport with Burkhead, was extremely disappointed but believes Burkhead will rebound.

“He’s a warrior,” Newton said. “I know he’ll be back stronger. His influence will be missed.”

The wide receiver Byrd pointed out that Burkhead has been great all season, saying: “You never want to lose a brother or your teammate.”

White, who knows Burkhead the best of the three as a fellow running back, said Burkhead is more than just a teammate – he’s a friend. When he saw Burkhead hit the ground hard, he wasn’t sure what had happened. He said it was “kind of scary” to see him barely moving, and at that point he was simply hoping it wasn’t anything major.

Once he found out it was serious, he expressed his frustration and said, “You just hate to see it.”

“I hope he can come back better than ever,” White said. “That’s my guy.” 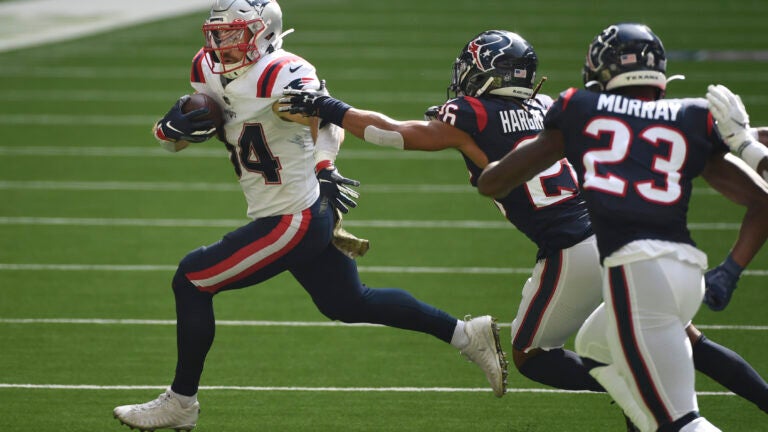