At which point would you say it was when the Patriots officially blew Sunday’s 27-20 loss to the Houston Texans?

Was it when N’Keal Harry waltzed past Justin Reed as if debating if the Texans linebacker was somebody he maybe, might, perhaps, should, block in lieu of his route, particularly seeing how his quarterback, Cam Newton, was about to get pancaked to the turf?

Was it watching J.J. Watt reject the fourth of Newton’s passes on the day in the final minutes of the game? (Granted, batting Newton’s passes at the line of scrimmage is about as benign an occurrence this season as waking up, but that didn’t stop the subpar CBS crew from crowing about the achievement.)

Maybe it was Newton’s inability to escape the Texans’ blitz with a little more than a minute left. Or, perhaps it was the quarterback’s inability to push his (successful) Hail Mary past the 10-yard line.

All fine choices to dissect. Except, it was probably this one: With the Patriots, down by seven on the Houston 30 yard-line and facing second and 10 with 1:28 remaining, the team decided to…run James White to the left.

Never mind the fact that tackle Isaiah Wynn was lost to injury on the play. That’s like tossing a rock in the air and waiting to see if it lands. The play didn’t take into account, in any way, stopping the clock. There was no assumption of an incomplete pass, or a short route out of bounds. There was no figuring that the Patriots could have picked up a few more yards, and then have called a timeout. None of that. Just a…run. Left.

It was that call, in that situation, with all the parameters involved, that was yet another indictment on Patriots offensive coordinator Josh McDaniels, who has for the most part this season looked about as plugged in as a bread box.

We get it. Tom Brady made McDaniels look good because of his mystical, plant-based protein power. Maybe that’s partly the case. Because the way he’s handled an offense with Newton suggests that McDaniels might not be able to progress past the Duplo stage of building blocks.

The guy has looked lost, for the most part, with his new toy in Newton, after years of (presumably) pulling the strings on an offense that Brady led to such success. Yet, after watching Brady in Tampa Bay this season, albeit with a host of weapons that are like Bambi vs. Godzilla compared to the Patriots, one has to wonder just how qualified McDaniels is for his position.

Oh, by the way. Remember this was the guy many assumed to be in line for the head coaching position in New England?

This is something that should have already concerned us, based on the fact that McDaniels failed in Denver and St. Louis, not to mention that he once drafted Tim Freaking Tebow in the first round of the NFL Draft.  Even then, New Englanders seemed more intent to bury their heads in the sand when it came to McDaniels’s outside transgressions when it came to looking at the long-term plan in New England.

Well, here we are.

How good do you think they feel in Indianapolis this week? The Colts nearly got stuck with the Patriots offensive stiff before settling for Frank Reich, who has managed to lead his team to an AFC South-leading 7-3. The fact that McDaniels ditched them is looking more and more like a feather in their wild card banner-waving cap these days. Ah, those were the days, giggling at the rivals for thinking they could have stripped the Patriots of one of their finest assets.

For years, Brady would praise his offensive coordinator, almost as if the guy had something to do with his Hall of Fame career. Except that, McDaniels was like a barnacle on the Brady Cruise, just one that the quarterback had to acknowledge from time to time. Like that bird dropping you can’t quite get off your car. Sooner or later, you’ve got to address the thing.

Is this really the guy that Bob Kraft and fam want to entrust with the franchise?

Oh, it could get worse, sort of like figuring the Sons of Belichick are in line for the head coaching gig. But if the grand plan of transition for the Patriots is to hand the reigns over to this overmatched schnook McDaniels, then the franchise – and, perhaps more importantly, its brand — is doomed.

New England ranks in the middle of the pack when it comes to overall offense (363.8 yards per game), but is near the bottom in terms of points per game (20.9) and passing yards per game (210.2), despite Newton’s season-high on Sunday.

Those are unusual numbers for a team that has normally been near the top of those categories for two decades. Then again, you had to figure, with no Brady the time would come.

Except that no Brady has exposed McDaniels the most of all. At least Belichick (and his mullet-lovin’ boys) has the defensive excuse that half of his best players recused themselves due to COVID concerns. What’s Josh’s best answer?

Not having Brady doesn’t work anymore. It’s what got him fired in Denver. It’s the fear that stopped him from going to Indianapolis. If somebody else wants McDaniels during the offseason, it’s only for the fact that they didn’t watch.

Second-and-long with a little more than a minute remaining and you run the ball? Does that show that McDaniels has a lack of trust in his quarterback or himself? Or both?

It’s easy to find criticism of McDaniels, particularly this season, without his food stamp. But Sunday was another level, particularly for a guy whom many assume to be taking the lead in New England. Someday.

The Colts are 7-3. The Patriots need a miracle to make the playoffs. 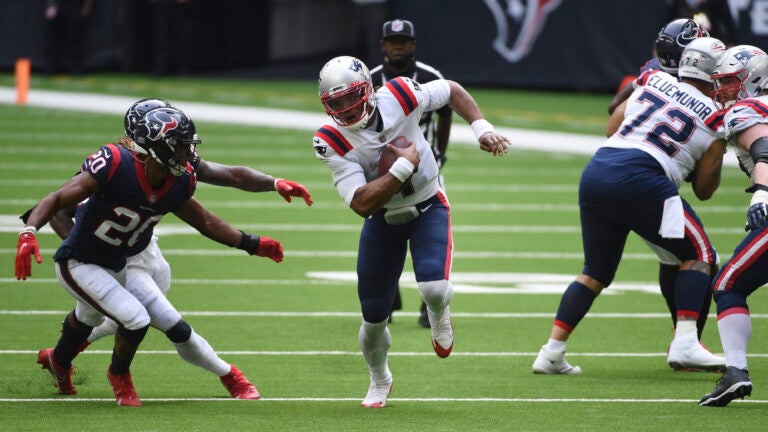