The 2020 New England Patriots season has been full of “one step forward, two steps back” moments, a trend that was reinforced this past Sunday when the Patriots dropped a crucial road game to the 2-6 Houston Texans, after grabbing an impressive 23-17 win over the Baltimore Ravens the previous week.

The loss to Houston erased all the positive momentum that the team had built up, after their upset over Baltimore in torrential rain at Gillette Stadium renewed hopes of an improbable playoff push.

Now, sitting at 4-6, the Patriots find their path to the playoffs impossibly steep, an unfamiliar position for a franchise that has been the crown jewel of the NFL for the last 20 years.

With postseason hopes nearly extinguished, it’s time for New England to begin to chart its course for 2021 and beyond. While reaching the postseason is all but out the window now, the franchise can still learn a lot from the final seven weeks of the season as it prepares for a critical offseason. Here is what New England should focus on in what’s left of the 2020 season, to help it prepare for future seasons.

Determine whether Cam Newton is the long-term answer

For New England to chart its course to 2021 and beyond, it needs to determine who will be its captain. The clear-cut No. 1 priority for the Patriots from now until training camp starts in the summer is to figure out whether it is worth it to bring back Cam Newton, who signed a one-year deal with the Patriots this summer, and will be a free agent when the season ends.

Despite the narratives making the rounds on the Boston sports radio airwaves, Newton has had a strong debut season in New England, especially when you consider the dearth of offensive talent surrounding him, and his COVID diagnosis earlier in the season.

New England is capable of winning a Super Bowl with Newton as its quarterback, but the question it needs to determine is if Newton, at 31 years old, fits with the current trajectory of an aging team that is beginning to enter a rebuilding phase.

If the franchise determines that it can surround Newton with enough pieces on offense, and build its team back up in time to take advantage of what is left of Newton’s prime, then they should explore re-signing Newton this offseason in hopes of getting back to being contenders next year.

But if the team determines that Newton’s window does not match up with the franchise’s window, it’s possible that the team could turn to Jarrett Stidham in the last couple of games to give him a real shot to show what he can do as a starting quarterback.

Stidham has yet to be given a real, honest chance to show what he can do as a starting quarterback, rather than as a backup coming in to play the second halves of blowout games. While New England should draft a quarterback in the 2021 draft regardless of what Stidham does the rest of this season, it makes sense to know for sure what they have in him before investing premium draft capital in a quarterback in the NFL Draft.

New England might not have the playoffs to play for, but there is plenty for Newton and this offense to prove for the remainder of this season.

Settle the running back position

Damien Harris has emerged as the team’s workhorse back after coming off the injured reserve against Kansas City earlier this season, and the results have been extremely promising, with Harris rushing 96 times for 514 yards in seven games. Make no mistake about it, Harris is a better back than Sony Michel, who he took over for when Michel went on injured reserve himself. But for Harris to secure the job long-term, and hold off Michel from making a push to reclaim his role as the team’s early-down running back, Harris, who already has two stints on the IR in two seasons and is currently dealing with chest and ankle injuries, has to show he can stay on the field.

With Rex Burkhead tearing his ACL against Houston, Michel, who was a healthy inactive against Houston, will likely get another chance to show the coaching staff he can be the running back they thought was worthy of spending a first-round draft pick on back in 2018. If Harris can’t stay healthy, Michel may be able to make a case that he is deserving of his fifth-year rookie option being picked up for 2022.

Turning the kids loose on the field has the benefit of helping the team’s young players develop faster, and helps the team get a better sense of its long-term outlook, depending on how its youth performs when given bigger roles.

Players like Kyle Dugger, N’Keal Harry, Joejuan Williams and Chase Winovich are individuals who have seen their playing time vary over the course of the season, but considering their positions and youth, would appear to factor significantly into the team’s plans in the next several seasons.

In the case of Harry, who has missed several games due to injury this season, it’s now or never to show that he can be more than just a blocking wide receiver who runs shallow routes near the line of scrimmage. Giving him more playing time could hurt the team’s offensive output, but with the playoffs no longer a realistic goal, it helps the team more to know for sure what they have in Harry.

Dugger has been arguably the team’s top run defender the last couple of weeks, coinciding with a sharp increase in snaps played. With Patrick Chung turning 34 in August, and Adrian Phillips a free agent after next year, the team would be wise to hand the reins over to Dugger the rest of the way, to see if he can be the team’s next great hybrid safety. So far, the early returns have been promising.

For the team to build towards the future, it has to begin to embrace the future now. While there could be short-term growing pains in playing the younger players more, the long-term benefit outweighs the short-term loss. At this point, the team has little to lose by doing so. 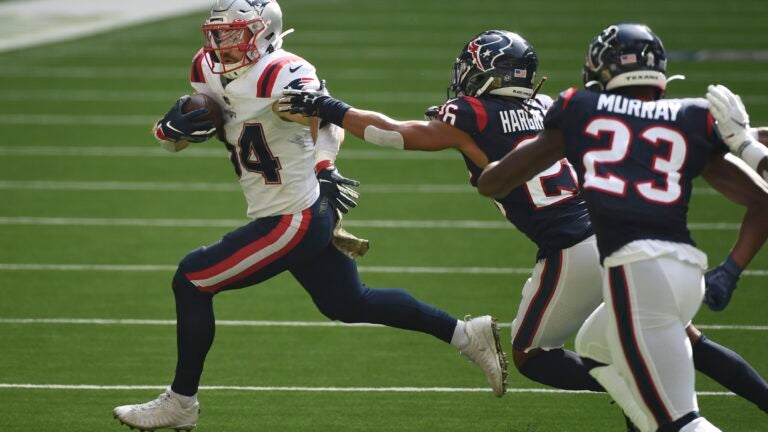