Larry Fitzgerald, 37 years old, is a supporting actor nowadays in the Cardinals’ star-studded cast of offensive players. He has 43 catches for 336 yards — a N’Keal Harry-like 7.8 yards per catch — and no touchdowns while mostly operating out of the slot. Perhaps he’s not as formidable as he once was, but I was looking forward to seeing him play against the Patriots on Sunday more than anyone else on the visiting roster.

Fitzgerald is a legend in his own time. He’s second all-time behind only Jerry Rice in receptions and receiving yards, which doubles as a welcome reminder of how ridiculously good Rice was. But because Fitzgerald has spent his entire 17-season career in Arizona, we don’t get to see him too often in New England.

He’s played against the Patriots just four times — every four years, in 2004, ’08, ’12 and ’16, with the middle two occurring in Foxborough — which is a remarkably few number to encounter a generational superstar and surefire first-ballot Hall of Famer.

Alas, we won’t see him this Sunday, either. Fitzgerald, who has missed just six games in his career, is out after testing positive for the COVID-19 virus. This remains scary stuff, even for someone like Fitzgerald who is remarkably fit even by professional athlete standards. I hope we haven’t reached the point of apathy where we’re looking at the virus as just another designation on the injury report.

While wishing him the best in his health and recovery and, in a much less important sense, lamenting the missed opportunity to see him go against the Patriots, there is still another reason to think of him today. It’s perhaps the greatest salute a fan base can provide: Fitzgerald is on that short list of players fans always wished had found a way to their team.

The Patriots always did a decent job of defending him, holding him to 17 catches for 222 yards and three touchdowns (two in the 2016 meeting) in their four games. But his greatness was a known quantity, and it was easy to dream how an 11-time Pro Bowl receiver whose smarts may exceed his considerable talents would have fared in tandem with Tom Brady.

I’d say Fitzgerald is the most coveted offensive player the Patriots have faced in the dynasty era. The defensive version of him is — let’s say it unison — Ed Reed, the rangy, brilliant, Hall of Fame safety for the Ravens. I still don’t know how Reed ended up spending his final season split between the Texans and Jets, rather than fulfilling what we thought was his destiny of playing at least one season for Belichick.

We’ll always wonder, and probably won’t get an answer unless he writes a voluminous memoir someday, how close Belichick came to taking Reed rather than tight end Daniel Graham in the first round of the 2002 NFL Draft.

If Fitzgerald is the offensive captain and Reed the defensive captain of the Sure Do Wish They Were Patriots team, who else would be on that roster? This should be more nuanced than just rattling off the names of the four or five best players in the league; it should also take into consideration who has the substance to fit the Patriots’ style.

Out of curiosity, and to help jog my memory of any names I might have overlooked, I dug up the last four years’ results of the Channel Media Market Survey, which annually polled in the range of 15,000 New England sports fans about various topics regarding the sports scene. One of the questions asked each year is, “Which opposing player do you wish was on the Patriots?”

The last four years of results, with the top five answers listed in order:

That is rather star-studded. There are some surprises — Clowney is about as overrated as it gets, and I half expected Reed to make this list even deep into retirement — but it’s also telling, too, in regard to what the Patriots’ weaknesses were perceived to be at a certain point in time. Mahomes has been the obvious right call the past two years. Who wouldn’t want that guy on their team? He’s as fun as it gets and seems to be a terrific teammate.

Out of all of them, Kuechly — who was first in the polling in 2016 — fits best with that Reed/Fitzgerald dynamic. A super-bright guy, his style of play would have been a perfect fit on the Patriots roster, and as a former Boston College tackling machine, he already had a local tie. Luke Kuechly on the Patriots would have been perfect.

Others through the years on that most respected/most coveted list? A few that came to mind for me: Eddie George during his hard-running Titans heyday, Troy Polamalu with the Steelers (even though he bit for every pump fake Tom Brady ever baited him with), and Curtis Martin.

Yes, ol’ Curtis also goes in the Ones That Got Away category, but that’s a thought for another day. This salute is for those like Fitzgerald, the greats we always wished were Patriots, but only got to admire as the worthiest of opponents. 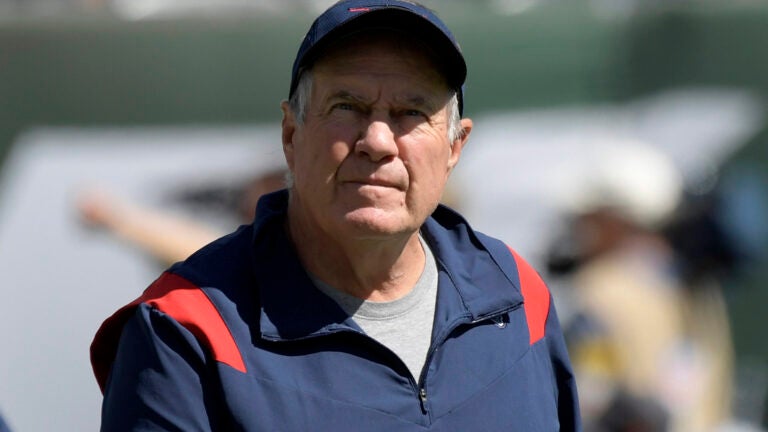