Welcome to Season 9, Episode 11 of the Unconventional Preview, a serious-yet-lighthearted, nostalgia-tinted look at the Patriots’ weekly matchup.

The NFL, for its betterment, has never featured more electrifying multi-skilled quarterbacks than it does now. The Patriots have had to deal with three of the best over the past three weeks. They took down reigning MVP Lamar Jackson and the Ravens two weeks ago (in a helpful monsoon possibly brought on by a Bill Belichick rain dance) before the Texans’ dynamic Deshaun Watson brought them back to reality last Sunday in a 27-20 Houston win that dropped the Patriots to 4-6.

If the Patriots are to keep their slim playoff hopes alive, they must figure out how to deal with perhaps the most electrifying pass/run threat the league has to offer in Cardinals second-year quarterback Kyler Murray.

Murray, who has thrown for 2,644 yards and 19 touchdowns and has run for 619 yards and another 10 touchdowns, has emerged as a prime candidate to succeed Jackson as the league MVP. He leads a Cardinals attack that ranks first in the NFL in total offense (414.3 yards per game) and seventh in scoring (28.7 points per game).

The Patriots, who have scored more than 23 points once in their last seven games, will be challenged to match that potency if they can’t figure out a way to solve Murray. Anyone know how to summon rain?

DeAndre Hopkins: We might be in the giving season now, but the most thoughtful thing the Cardinals could have done for Kyler Murray occurred in March, when they acquired Hopkins, a three-time All-Pro receiver, from the Texans. Technically, I suppose, the gift was actually from the Texans, who sent the now-28-year-old receiver and a fourth-round pick to the Cardinals for oft-injured running back David Johnson and a second-round pick. The deal came as a shock, and it was almost universally regarded as a heist for Arizona. Hopkins, who signed a two-year, $54.5 million extension for the 2023 and 2024 seasons after joining the Cardinals, has done nothing to change that perception. He has 72 catches for 912 yards and four touchdowns in his first season in Arizona, with one of the touchdowns being perhaps the most memorable play of the NFL season. In a Week 10 win over the Bills, Hopkins had 7 catches for 127 yards, a performance that culminated with plucking a Hail Mary out of the sky to give the Cardinals a 32-30 win. It was the greatest Hail Mary play I’ve ever seen that didn’t include Doug Flutie and Gerard Phelan. The Patriots have defended him well in the past – he has 29 receptions for 403 yards and no touchdowns in six regular season games versus New England. But the Patriots pass defense has had some hiccups lately, and Hopkins should pass the 1,000-yard threshold for the season Sunday – he has four games this season with at least 127 receiving yards.

Kenyan Drake: This guy. The Cardinals’ leading rusher with 641 yards (22 more than Murray, on 52 more attempts) is a familiar opponent, having faced the Patriots seven times during his 3 ½ seasons with the Dolphins before a midseason trade to the Cardinals in 2019. Drake hasn’t been especially effective against the Patriots, running for 202 yards with a 3.67 per carry average in those seven games, but that history does include a starring role in one of the most bizarre Patriots losses in years. Drake accounted for the final 52 yards and the winning touchdown on the festival of laterals that gave the Dolphins’ 34-33 win on the last play of their December 2018 matchup. Drake missed Weeks 8 and 9 with an ankle injury, but returned to run for 100 yards on 16 carries in a Week 10 win over the Bills.

Sony Michel: Provided that offensive coordinator Josh McDaniels remembers to stick with the run – something he did not do against the Texans – the Patriots (153.6 yards per game rushing, fourth in the NFL) should be able to gash a porous Cardinals run defense (124.7 yards allowed per game, 23rd) that has been pummeled with injuries. Damien Harris should be the primary ball carrier. But with valuable Rex Burkhead done for the season with a knee injury, there should be ample opportunity for Michel, who was activated off injured reserve last week but inactive for the game. He’s an enigma, but he did rush for 117 yards on nine carries the last time we saw him (Week 3 versus the Raiders).

During the midst of the Patriots dynasty, there were occasional tests of context that fans had to pass in order to show they understood the discipline with which Bill Belichick built his team.

The stringencies of the salary cap made it impossible to retain every good player without having a significant effect on the depth and quality of the overall roster, and Belichick was unemotional in moving on from talent from time to time.

The trade of Chandler Jones to the Cardinals in March 2016 for guard Jonathan Cooper, a former first-round pick, and a second-round selection in the 2016 draft was one of those times. If you’re still lamenting this deal four years later, well, you are my grievance, friend.

Jones was a productive pass rusher with the Patriots, piling up 36 sacks in 52 games. He’s been even better for the Cardinals, with 61 sacks in 69 games, including an NFL-best 17 in 2017. (He’s expected to miss the rest of season with a biceps injury.)

The Cardinals surely have no gripes about how the deal worked out. Neither should the Patriots.

He was entering the last season of his contract at the same time as Dont’a Hightower, Malcolm Butler, and Jamie Collins, and it was apparent there were going to be some hard decisions made about who got paid. Jones hadn’t been the most reliable Patriot in big moments – he had just two sacks in nine playoff games. And in January 2016, the week of a playoff matchup with the Chiefs, he showed up at the Foxboro police department shirtless and in what was described as a “confused” state of mind.

Despite that occasional unreliability, he was looking at a certain massive payday after the Giants gave Olivier Vernon $52 million in guarantees in March 2016. The Patriots ended up paying Hightower, who had an uncanny knack for making big plays at crucial times in Super Bowls.

The second-round pick they received was swapped for third- and fourth-rounders that became guard Joe Thuney and receiver Malcolm Mitchell, a star of the Super Bowl LI win over the Falcons before a knee injury abbreviated his career.

Jones got his jackpot from the Cardinals (five years, $82.5 million in March 2017). The Patriots got two more rings after he left. That’s what a win-win scenario looks like.

Will facing Cam Newton in practice help prepare the Patriots defense for dealing with Murray? The guess here is no, not much. Newton is still a dangerous runner, and it’s bizarre that Josh McDaniels didn’t call his number on the ground more than three times against the Texans, but he’s more of a diesel truck at this point. Murray is the newest model of the flashiest sports car that’s ever blown past you on the highway and left your Prius in a trail of envy.

Murray and Newton do have much in common. They’re two of just 23 players who have won the Heisman Trophy and been selected first in the NFL Draft. They were the only rookies in NFL history to throw for at least 3,500 yards and run for 500 yards. And they’re both chasing Newton’s single season record for rushing touchdowns by a quarterback (14), set during his 2015 MVP season. Murray has 10, while Newton has rushed for nine touchdowns this season.

None of those similarities will do much to help the Patriots prepare for a player too versatile to be totally solved, even if they do find a way to bewilder him in the passing game. The assignment of shadowing Murray will likely fall to Dugger, the emerging rookie safety who has played almost 80 percent of the snaps the last two weeks. Dugger did a fine job in leading the containment of Jackson two weeks ago, but the savvier Watson used his legs to create opportunities in the passing game last Sunday.

Murray has run for more than 60 yards in seven of the Cardinals’ 10 games. They’re 5-2 in those games. It’s imperative that the Patriots contain him, but a stellar performance from Dugger and the rest of the Patriots defense will be required to close that gap between knowing what they need to do and actually pulling it off.

Or, Cardinals-Steelers was the best Super Bowl no one ever talks about …

The Patriots’ win two weeks ago over the Ravens was impressive, but it also feels like something of a weather-aided outlier after watching them falter against a Texans team that came in at 2-7. It’s also possible that we look back on that win in a couple of weeks and realize that the Ravens were a team on the verge of implosion.

Unfortunately, that victory offers the only real hope that the Patriots can find a way to beat a Cardinals team that has a significant talent advantage and at 6-4 is in the hunt in a super-competitive NFC West race.

It’s possible that Bill Belichick has a few tricks that will at least temporarily flummox Murray and head coach/offensive whiz Kliff Kingsbury, a 2003 Patriots draft pick and co-chair with Gordon Hayward of the A Decent Haircut Can Work Miracles For Your Image club. I’m curious to see how he approaches this.

But given the Patriots’ defensive limitations – an uninspiring linebacker corps, a pass rush that doesn’t have anyone with more than 2.5 sacks, and a secondary that has fallen to the mediocre middle this season (236.1 yards per game, 15th) – the pathway to beating a Cardinals team that has scored at least 21 points in 13 straight games is not obvious. It may not even be existent. Cardinals 28, Patriots 20. 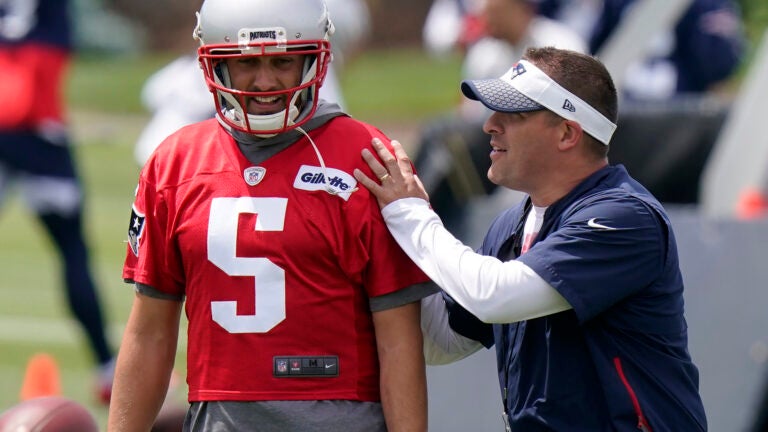