1. With upset wins over the Ravens and now the Cardinals bookending a loss to the 2-7 Texans, it’s tempting to suggest that the Patriots are unpredictable. But that’s not entirely true, because the shape of that unpredictability has become … well, predictable. If the defense plays well and the special teams deliver a big play or two, as was the case Sunday against a far more talented Cardinals team, they can beat anyone. If those things do not happen, they can lose to anyone, except, of course, for the Jets. And no matter the circumstances, it seems, there will be a referendum on Cam Newton’s performance after the game. His inconsistency has become perhaps the most predictable thing about this team, and it’s practically inevitable at this point that he will have the ball in his hands late with a chance to win or lose the game.

2. For those of us on record as wanting Newton back next year, Sunday was not a day that bolstered the case. He came in with a career-best 68.1 completion percentage, but his accuracy — or lack thereof — appeared to be some sort of bizarre tribute to Carson Wentz. He was intercepted on the first pass he threw, connected for just 24 yards in the first half, finished just 9 of 18 for 84 yards, didn’t throw a touchdown pass, and threw an interception on the second-to-last possession that the Cardinals failed to convert into the winning points when Zane Gonzalez missed a 45-yard field goal. Yet on the final possession, he scrambled on third and 13 for 14 yards, then got an added 15 when Cardinals’ knucklehead Isaiah Simmons drilled him in the helmet. So many times this season, the outcome has depended on whether or not Newton could come through in the final moments. In an unorthodox way Sunday, he did.

3. For the better part of two decades, the Patriots almost always had a significant advantage in the two most important game day roles: coaching and quarterback play. The latter certainly isn’t the case anymore, but the former remains as true as ever. In terms of pure talent, the Patriots had no business being on the field with the Cardinals. But Bill Belichick found a way to neutralize Kyler Murray, who was clearly compromised by a shoulder injury. Belichick, who ate up Cardinals coach Kliff Kingsbury so thoroughly that he should have to go back to his old haircut, remains the No. 1 reason why we have to assume the Patriots have a chance to beat anyone, even if they’re at a talent disadvantage right now against just about everyone they play.

4. We can’t forget to aim a quick salute to Nick Folk, who booted the 50-yard field goal to win it at the buzzer. He has been more than steady this season, and no one is questioning the Patriots’ decision to move on from all-time leading scorer Stephen Gostkowski anymore. I was skeptical that Folk or the Patriots were even going to have a shot at winning it after the Cardinals marched 80 yards on 16 plays – bolstered by defensive holding calls on Jason McCourty and Stephon Gilmore to keep the drive alive – to tie it at 17 with a little over 8 minutes left. It felt like all the momentum had shifted the Cardinals way at that point.

5. The Patriots’ goal line stand right before halftime was the combination of exceptional effort and Kingsbury’s hubris. The Cardinals covered 71 yards on 15 plays but came away with no points after Kenyan Drake was stuffed by Ja’Whaun Bentley and assorted other Patriots on fourth down. I’m usually in favor of going for it on fourth down inside the opponent’s territory, but Kingsbury should have kicked the field goal, which would have put the Cardinals up 13-7 heading into the break, with the ball in their possession to start the second half. If there’s such a thing as having momentum heading into halftime, the Patriots got it after that series.

6. I’m on record as wondering what the Patriots see in Gunner Olszewski, especially as a kick returner, where he hasn’t often made explosive plays or wise decisions. So it was a relief to see Donte Moncrief taking kickoffs Sunday, even before his 55-yard return late in the first quarter that set up the Patriots’ first scoring drive. Between the new rules and ineffective return men, it felt like that was the first good kick return by a Patriot since Cordarelle Patterson was here.

7. Just when it felt like the Cardinals might dominate the game, having built a 10-0 lead in the first quarter, the Patriots put together a seven-play, 41-yard touchdown drive, sparked by that Moncrief return. James White punctuated the drive by taking a pitch from Newton and running it in from 7 yards out, the first of his two touchdowns. I can’t be the only one who saw how White finished that first run – reaching the ball over the goal line just before his knees hit the ground – and immediately flashed back to his winning touchdown in Super Bowl LI. It looked exactly like it, minus the confetti.

8. Perhaps it was coincidence, but Olszewski made his biggest play as a Patriot a few series after Moncrief’s big return, breaking loose on a punt return and taking it 82 yards to the end zone. Unfortunately, a ferocious late block by Anfernee Jennings was flagged, negating the TD and sending the Patriots back to the Arizona 39. Olszewski ended up being credited with a 58-yard return. So maybe that’s what the Patriots see in him.

9. Should Jennings have been flagged on the play? By the letter of the law, it was justifiable, but it was interesting to listen to Fox rules analyst Dean Blandino hem and haw, saying, “I don’t love it” before explaining that Jennings shouldn’t have leveled his shoulder into the defender but rather should have acted as more of a screener. Credit to analyst Daryl Johnston, who pointed out that had Jennings simply interfered with the player pursuing Olszewski he might have been leveled himself. In the end, it was probably the correct literal interpretation of a rule that has some built-in flaws of logic.

10. The Patriots defense has had plenty of practice dealing with elusive quarterbacks this season, including Lamar Jackson and Deshaun Watson in the previous two weeks. Murray, who entered with 619 rushing yards (12th in the NFL) and 10 touchdowns, is as adept at making big plays with his feet as any quarterback I’ve ever seen. So credit the Patriots defense for defending that aspect of his game well. Stephon Gilmore had a nice play setting the edge in the first half, forcing Murray to abort a play and run out of bounds, and Josh Uche had another late in the first half in which he cut off Murray’s path, held his ground, and chased him across the field out of bounds.

11. When we talk about all of the effective undrafted free agents the Patriots have added in recent years – Malcolm Butler, James Develin, J.C. Jackson. Jonathan Jones, Jakobi Meyers, and so on – we tend to leave Adam Butler out of that conversation. But he’s in his fourth season now as a dependable defensive tackle, especially against the runs, though he did collect six sacks last season. Sunday might have been his best game as a Patriot. He had four tackles and picked up a crucial sack of Murray on third and 2 with just over 2 minutes left in the third quarter.

12. Rough series spanning the end of the first quarter and into the second for N’Keal Harry. I should say, rough series even by Harry’s standards, since most of his series are pretty rough. On the possession, he was called for a holding penalty that negated a nifty 10-yard Newton run, dropped a pass that hit him right in the mitts.

13. I suppose there could have been worse starts. A fumble on the opening kickoff, a pick-six on the first attempted pass, a Patriots defender pulling a Jim Marshall after picking up a fumble, that sort of thing. This wasn’t quite on that scale, but the beginning of this game was disheartening because it felt like a lowlight reel of all that went wrong last week against the Texans. You know, the kind of stuff that is supposed to be repaired before the next game.

14. Last Sunday, Newton had four passes batted down by J.J. Watt alone, but the Texans couldn’t convert any of them into interceptions. The Patriots weren’t so fortunate this week. On his first attempt Sunday, the Cardinals’ Jordan Hicks got loose on a blitz and tipped Newton’s pass, which found its way into the waiting arms of Markus Golden. It was Newton’s first interception since the Week 7 loss to the Niners.

15. With the Patriots playing a rare game on Fox, we got the Kevin Burkhardt/Johnston broadcast pairing, which isn’t one we’re too familiar with around here. I enjoyed listening to them, though Johnston did make several identification mistakes, including calling N’Keal Harry both K’Neal and D’Neal, as well as identifying Cardinals guard Kelvin Beachum as the Patriots’ Shaq Mason. 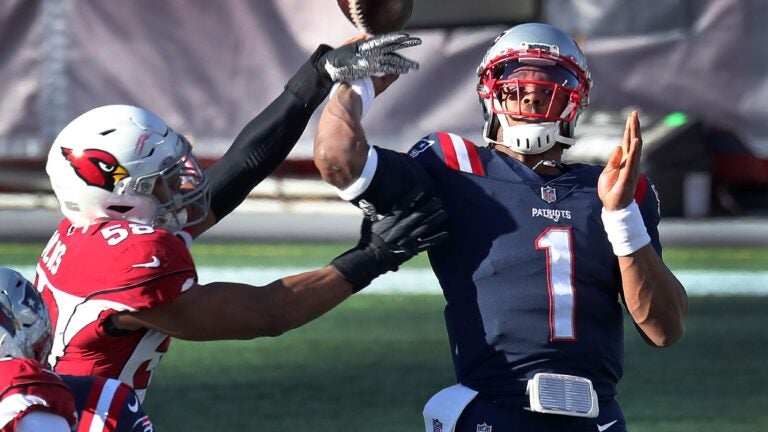