Five takeaways from the Patriots’ 45-0 destruction of the Los Angeles Chargers, a dismantling that enabled New England to climb back to .500 as it enters the final quarter of the season…

A GREAT WEEK FOR BELICHICK

Throughout this season many have made weekly comparisons between Tom Brady and Bill Belichick, with the Pats’ ex-quarterback and their current coach evaluated in side-by-side snap judgments in hopes of deciding who’s living the better life after their offseason separation.

Brady and his Buccaneers were on a bye, so that couldn’t happen this week — though it’s hard to imagine the 43-year-old QB could’ve had a better showing than Belichick did.

The most obvious evidence of his achievement came courtesy of the scoreboard, with the Pats pulling their record even thanks to a fourth win in five games and one of their more lopsided results in recent memory.

But this game had Belichick’s fingerprints all over it, victory built around so much of what the coach has long tried to instill in his team, and systematically silencing (at least for one Sunday) the swelling criticism of the job he’s done in the draft, the choices he’s made on building a post-Brady roster, and even some of his in-game decisions.

Everything — everything — was efficient and effective, starting with an offense that pounded the Chargers behind a tone-setting performance from the offensive line. The defense carried a shutout deep into the fourth quarter, building on its strong effort of a week prior. And, just as much a testament to Belichick’s core beliefs, the Pats came up with two special teams scores.

They flew across the country, at the start of a two-game road trip, and looked wholeheartedly prepared and focused. They were facing the presumptive offensive rookie of the year in quarterback Justin Herbert, but, as always, Belichick knew just how to vex a rookie signal-caller. Herbert threw 50 times — completing just 25 of those throws for 209 yards. Two of his tosses were intercepted, and he was sacked three times.

One of the picks came from JC Jackson, formerly an undrafted player that is making a push for the Pro Bowl with now seven interceptions. The other came from Chase Winovich, who entered the league last year with the ability to pass rush, but looked like he’d been coached up nicely in anticipating Herbert’s throw to jump in front of a would-be receiver.

One of this year’s rookies, Josh Uche, wreaked havoc on a couple of key downs early. Fellow first-year defender Kyle Dugger was all over the field early, too. Second-year back Damien Harris ran the ball with tenacity, again. And even N’Keal Harry contributed, clearing space with his big body and snatching a contested touchdown pass in the third quarter.

The draft picks delivered. So did the guys Belichick has hung on to at the bottom of the roster. The stars and starters he’s committed to did their jobs well — including the quarterback he turned to in Brady’s stead. They deserve credit, too.

None more than the one in charge.

THIS WAS THE GOOD CAM

At the end of a week many within Patriots Nation spent bemoaning how bad the Patriots’ passing game was versus Arizona, Cam Newton had 42 yards passing at the half Sunday — exactly on pace to match the 84 yards he threw for against the Cardinals.

But, boy, did this feel different.

Last week the Pats’ inability to advance the ball through the air had the feel of a fatal flaw, with Newton’s wretched stat line signifying the last straw for many who’d previously been vacillating on the value of whether New England should try to re-sign him for next season.

This week, though, it hardly felt like a concern. The two special teams scores that bolstered the Pats’ advantage to 28-0 before the break certainly helped that feeling, but it wasn’t exclusively the score that changed the tone surrounding Newton. It was the execution, too.

The Patriots came out with the purpose of playing to their quarterback’s strengths, and it worked nicely. For weeks now they’ve seemed to be more focused on avoiding his weaknesses, but with a design that included run options, planned runs, sneaks, and draws, they didn’t look to protect themselves from Newton or protect Newton’s legs from potential injury risk. They planned to capitalize on his decision making as a runner, as well as his size. And capitalize they did.

Midway through the third quarter, he’d run it as much as he’d thrown it (13 times each). For that commitment, the Pats had 52 yards and two touchdowns to show for it. Oh, and a 35-0 lead.

It’s a short one, but expect to hear plenty this week from those who’d be in favor of another season with Newton behind center. Even if he wound up with just 69 yards passing.

The first period has been problematic for the Patriots this season, and the last time they traveled a woeful start at Houston doomed their entire afternoon. But the way the Pats started Sunday suggested they were well-prepared to execute — and win — in Los Angeles.

A week after a win over the Cardinals that required contributions from up and down the roster, New England grabbed a 14-0 lead within the first 16 minutes, and all three phases of the operation were on-point in the process.

The offense put together a pretty opening drive, playing on its strengths while converting in key situations and marching down the field on the meaty legs of Damien Harris and Newton. It was a possession that seemed to be straight out of the season opener against Miami, when the quarterback looked like as much of a threat as he’s looked at any time since joining the Patriots. Josh McDaniels also sought to exploit matchups by motioning Newton to the receiver position as the ball was snapped directly to Harris — but whether trickery, misdirection, or simple smashmouth principles, the Chargers had no answer for the Pats on that first series.

The defense did its part, too. First, Deatrich Wise collected a third-down sack that may well have factored into Los Angeles missing a field goal try. On the next two drives, the Chargers went three-and-out.

And in between those, Gunner Olszewski doubled the Patriots’ advantage by bringing a punt back 70 yards for a touchdown. This one counted, a week after he had a return score negated by a penalty, and what was especially impressive was the way New England’s special teams appeared ready to make the moment count from before the snap.

As the Chargers lined up, the two Patriots covering the outsides on the punting unit motioned in toward the rest of the formation. They moved before the LA players, and when they came in, the Chargers reacted by also coming to the middle of the field.

This meant there were no LA gunners motoring toward New England’s Gunner as the punt hovered in the air. As such, he had space when he caught it, and Matt Slater also had time to get in position where he could seal Olszewski’s path toward the sideline. Between Slater and the other blockers, Olszewski was well on his way before he was even touched, so all it took was one sharp cut plus some toe-tapping along the boundary and he had reached paydirt.

Teams have exploited the Chargers on special teams all year. But rare have been the moments this season where the Patriots have unilaterally dominated an opponent the way they did their hosts early Sunday.

Over the first half in Houston, as DeShaun Watson decimated the Patriots’ defense, the lack of disruption from the Patriots’ front was a painful source of frustration. It was the most recent example of the group’s difficulty in generating pressure on quarterbacks, and they hadn’t been particularly good against the run, either.

Since then, however, they’ve elevated their play. And in each of the Pats’ two subsequent victories, they’ve actually been a difference-making strength.

The leader in that effort has been Adam Butler, who had a sack, got his hands on a pass, and hit Herbert another time to follow up a dominant day against Arizona. Lawrence Guy registered a brutalizing sack, as did Wise, who hit the quarterback a couple of times. Uche was a presence in the backfield, too, as was Winovich.

The scoreboard helped, but while disrupting the passing game, the group also held its own against the run. They yielded 70 rushing yards, the third time in the last five that the Pats have yielded that many or fewer. Over the first seven games, they never gave up fewer than 87, and surrendered at least 135 yards five times. Only the Ravens and Cardinals, two of the NFL’s better ground games, have come anywhere near that total in the past five contests.

A defense can’t do much better than a shutout. And good defense tends to start with the guys at the line of scrimmage.

Although they’ve now won four of five, and climbed back to even at 6-6, the Patriots’ path to the playoffs really got no easier on Sunday. The Browns and Colts both won, Cleveland moving to 9-3, while Indianapolis improved to 8-4. The Dolphins handled their business, too, so Miami is also 8-4. Those are the AFC’s three current wild cards.

That leaves the Patriots facing a two-game deficit for a playoff spot, and only four games remain in the regular season. Further complicating matters is that the Raiders (7-5) also won (barely, over the Jets), so they’re still ahead of New England, too. So are the Ravens (6-5), pending Tuesday’s game against the Cowboys.

At one point, it looked as though the Pats might be able to afford a loss against the Rams on Thursday, because it won’t harm their in-conference record if things need to be sorted by a tiebreaker. Now, unless the Pats are counting on either the Colts or Dolphins going 1-3 the rest of the way, in all probability New England needs to win out.

Unfortunately, 45-0 only counts for one win. And it can’t get back one of the coulda-woulda-shoulda victories the Pats coughed away earlier in the year. 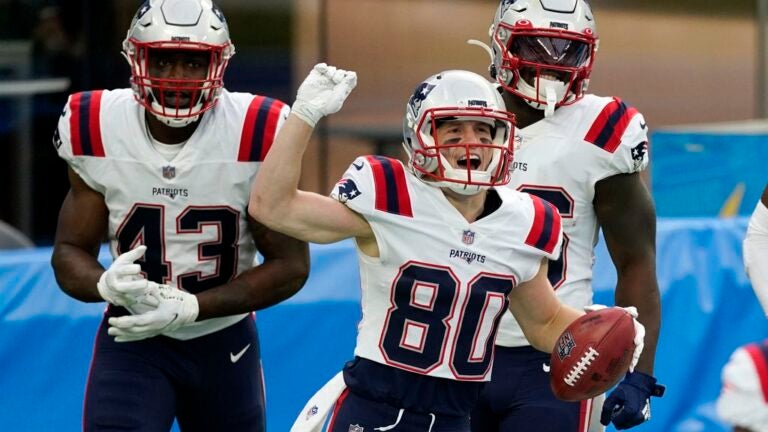