1. It might have been something we lost sight of during the crazy heights of the Patriots dynasty, but every win in the NFL should be satisfying. It takes so much — talent, discipline, preparation, brute force — to win a single game that every last one should bring some level of appreciation. I don’t think Bill Belichick, even with his unprecedented success, has ever forgotten that. But some — perhaps a win against a brutal and bitter rival, or one in which every trick and plot in the game plan works to perfection — are more satisfying than others. Sunday’s win, a throttling so thorough that the Chargers should have to immediately move back to San Diego after embarrassing themselves like this in Los Angeles, has to be one of those most satisfying of victories.

2. This one had all the hallmarks of a game Belichick would love. The Patriots excelled in — say it with me — all three phases. They scored two special teams touchdowns — a punt return by Gunner Olszewski, who is suddenly channeling Devin Hester the last two weeks, and a 44-yard return of a blocked field goal by Devin McCourty right before halftime. A week after tormenting Cardinals dynamo Kyler Murray, they did the same to Rookie of the Year frontrunner Justin Herbert. And behind a creative game plan, the Patriots ran the ball down the Chargers’ throats, gaining 165 yards on 43 attempts, with a pair of Cam Newton rushing touchdowns. How thorough was it? Even N’Keal Harry had a touchdown. (Not sorry, couldn’t resist.)

3. We’re well-aware of Belichick’s history of making young quarterbacks look like they’re paying homage to the legacy of JaMarcus Russell the first time he faces them. But I’ve got to admit, I thought Herbert – who is as well-rounded and polished as a rookie as any quarterback in a long time – was going to be befuddle-proof. Instead, he was so … right, befuddled … that I started to wonder if his role was being played by Craig Whelihan (look him up) on Sunday. Herbert was held to 85 yards passing in the first half, 209 overall, was pummeled all day, and threw two interceptions, including a beauty by Chase Winovich of all people. Over the last two weeks, the Patriots defense has held Murray and Herbert to a total of 410 passing yards, with no touchdowns and three interceptions.

4. Not to detract from a thoroughly excellent effort by pretty much the entire roster — the best play of the game might have been Justin Bethel sprinting to prevent a touchback, and did I mention that Sony Michel contributed an outstanding catch? — but the truth is that Belichick vs. Anthony Lynn was the biggest coaching mismatch in the league this season. The Chargers’ lack of discipline was staggering. Twice they had too many men on the field on a punt. An illegal hands to the face penalty on third and 19 kept a Patriots drive alive. They couldn’t figure out how to protect Herbert against a Patriots pass rush that didn’t have a player with even 4 sacks entering the game. Then they left Herbert in to take a beating when it was out of reach in the fourth quarter.

5. Now to perhaps the biggest hero of the game. Last week, after Donte Moncrief returned a kick for 53 yards to set up a touchdown against the Cardinals, I wondered what exactly Gunner Olszewski’s purpose was on this team. The next time he touched the ball in that game, he returned a punt for what would have been a touchdown if not for a nitpicky call on the block by Anfernee Jennings. Against the Chargers, Olszewski made up for it and then some, getting not just one touchdown, but two. And almost three.

6. The first came on a 70-yard punt return, with Olszlewski using some nifty blocks from Matthew Slater, Rashad Berry, and Justin Bethel to give the Patriots a 14-0 lead in the second quarter, back when there was some actual suspense. The second came in the passing game, on a 38-yard strike from Jarrett Stidham midway through the fourth quarter that gave the Patriots a 45-0 lead. Earlier in the fourth, he nearly had another punt return touchdown, breaking on 61 yards on a drive that led to a field goal.

7. So maybe his purpose is Punt Returner Extraordinaire? Olszewski’s touchdown was the first Patriots punt return for a score since Julian Edelman took one 84 yards to the end zone against the Broncos in Week 9 of the 2014 season. Olszewski nearly had another in the fourth quarter, breaking a return for 61 yards that eventually led to a field goal. I’m not saying this definitely happened, but it’s possible Olszewski has borrowed Edelman’s powers while he’s on injured reserve.

8. Now, I wouldn’t say I ate a full meal of crow Sunday, but let’s just say a sampler of crow was definitely served, and it was not delicious. Saturday, I wrote that N’Keal Harry is a bust and that it’s time to let go of the perception that he can be some kind of passable Anquan Boldin type. Sunday, he scored the Patriots fifth touchdown by basically posting up Boldin-style in the end zone and catching a Newton dart. It was an impressive play, and one that lit up my social media channels.

9. Ah, but I know how my predictions go — the proper word is haywire; wrong also works — and so I was ahead of you, tweeting this before the game: Now that I’ve put this on record, I fully expect him to have a huge day today that changes the arc of his career. I’m not sure a two-catch, 14-yard effort in a blowout counts as changing the arc – I remember Chad Jackson scoring an occasional touchdown in a rout too – but it was a good day for a player that needed one. Now, get back to me when the Seahawks regret that he didn’t slip to them in the ’19 draft.

10. Here’s something we haven’t said much this season: Wow, that was a really fun and creative opening touchdown drive by the Patriots. Talk about setting a tone for a successful day. Damien Harris handled much of the workload, picking up 51 total yards, including a 15-yard catch and run on the first play from scrimmage, an 11-yard gain on an option pitch from Newton, and even a couple of carries out of the Wildcat (who does Belichick think Harris is, Ronnie Brown?).

11. But it wasn’t just Harris. Newton did the touchdown honors, capping a 13-play drive that chopped more than seven minutes off the clock, with a Walter Payton-like high jump over the line from a yard out. Newton also had a 13-yard run on the drive and converted a fourth and 2 by plowing into the line. Sometimes it seems like Josh McDaniels is hesitant to use Newton as a primary runner — sometimes he gets away from the run altogether too easily — but on Sunday the Patriots didn’t back away from using their quarterback’s greatest strength.

12. The touchdown was his 10th on the ground this season, the third time in his career he has reached that milestone. He added his 11th rushing touchdown of the season in the second quarter, capping a well-rounded 16-play, 54-yard drive that was aided by an illegal use of the hands penalty on the Chargers’ Jerry Tillery on third and 19. Newton finished with 48 rushing yards and two touchdowns. As frustrating as it has been at times watching Newton as a passer — and he had just 69 yards Sunday in the air — he’s been a blast when he gets going on the run. He still turns the corner better than anyone his size has the right to.

13. The hardest hit I’ve ever seen a ball carrier put on a tackler was Earl Campbell’s famous stampeding of Rams linebacker Isaiah Robertson (a terrific player in his own right) in a 1978 game. Others might cite Bo Jackson vs. Brian Bosworth, 1987. There was nothing quite like those iconic moments in this game, but I will admit to flashing to those particular tramplings for a fleeting second when Newton trucked Chargers linebacker Nick Vigil on his second touchdown run. That guy wanted nothing to do with Newton, and did not seem to mind at all that Jermaine Elumunor was pulling him into the end zone.

14. Josh Uche hasn’t played a ton of snaps in his rookie season – his high entering Sunday’s game was 22 in the Week 11 loss to Houston — but he has had a knack for making plays in his limited time. He had a sack of Lamar Jackson in the Patriots’ Week 10 win over the Ravens, considered an upset at the time. And in limited time (16 defensive snaps), he managed to be prominent last week in helping keep Kyler Murray contained. He continued to impress Sunday.

15. Uche had a couple of impressive plays in the first half, nearly sacking Herbert on third down with 6 minutes and 45 seconds left in the second quarter. Herbert had no choice but to get rid of the ball, with Uche blowing past left tackle Storm Norton. He added another hit on Herbert in the final seconds of the first half. I think Belichick got it right in the second round this year, taking Kyle Dugger 37th and Uche 60th. 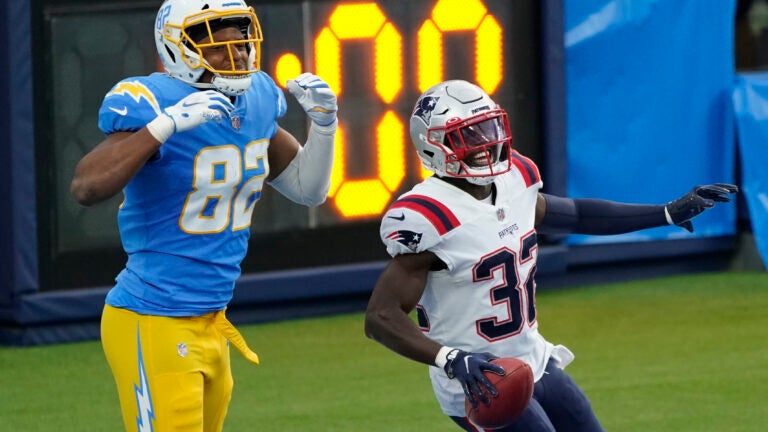 ‘I knew today that I was going to score’: Devin McCourty shared why Sunday’s ‘My Cleats, My Cause’ game was special to him