Was this an audition?

And, if it was, could Josh McDaniels have done any better?

No, it wasn’t the Patriots offensive coordinator’s playbook that impressed most Sunday, when the 6-6 New England Patriots routed the hapless San Diego (I know) Chargers, 45-0. This was the sort of game that Bill Belichick romanticizes about. Defense and special teams. What’s better than that?

Gunner Olszewski, Devin McCourty, and the rest of the New England defense grabbed the most headlines Monday morning for helping to pitch the shutout at SoFi. But they’re probably not primarily in the aftermath discussion amongst a Chargers ownership group that desperately needs to fix the fatuity that inhabits their new, $5 billion stadium.
Advertisement:

I mean, all this time, New York’s Adam Gase seemed to be the slam-dunk candidate to hold the title of most inept coach in the NFL. But what we saw in Los Angeles Sunday afternoon really takes the prize. Chargers coach Anthony Lynn, who showed promise over the course of his first two seasons with the Chargers (21-11), is a man in over his head, a coach who has completely lost control over a team that should be far better than its 3-9 record.

Rookie quarterback Justin Herbert is immediately transforming into a phenom (at least, until Belichick got his hands on him). Keenan Allen, Austin Ekeler, and Hunter Henry are a three-headed threat on an offense that should frighten everybody else in the NFL. Pro Football Focus ranked the Chargers as the eighth-best defense in the league prior to the season.

So, where’s the problem?

Nobody blows a lead like the Chargers, including double-digit leads in back-to-back games against the Tampa Bay Buccaneers and New Orleans Saints earlier this season. Just like you could argue that the Patriots could be 10-2, if not for failing at last-minute attempts to win against Denver, Houston, Seattle, and Buffalo, the same point could be made for Anthony Lynn’s Chargers.

The problem is, they are Anthony Lynn’s Chargers.

Lynn’s name being on the hot seat should be of no surprise, which is why, after Sunday’s embarrassment at the hands of the Patriots, it was the man across the field who was already being whispered as his replacement.

I know, we’re headed for another offseason, which means another roundup of “[Insert team name] is interested in Josh McDaniels to be their new head coach” suggestions. This, despite a faction of the NFL media that can’t understand how another team would give him the time, particularly after what he pulled in Indianapolis back in 2018. Yet, McDaniels’s name still comes up, over and over (both the Packers and Browns have interviewed him since), which makes his anointment, somewhere, an inevitability.

McDaniels hasn’t had the best season in New England, filled with bumps, bruises, and criticism while trying to create an offensive attack with castoffs from the Island of Misfit Toys. The Patriots are in the bottom-third in the league in terms of points per game, McDaniels has done little to “resurrect” Cam Newton’s NFL prowess, and, meanwhile, his former pupil keeps putting up an offensive explosion every week without him in Tampa. If anything, shouldn’t this season have lessened the McDaniels interest?

But Los Angeles is intriguing, if mainly for the fact that McDaniels wouldn’t be getting a broken-down version of the quarterback formerly known as Andrew Luck in Herbert, a franchise cornerstone whom he can build around. Nor does it appear to be a long rebuild either, with owner Dean Spanos desperate to create interest in its new home, particularly after shunning its former residence for greener pastures where the neighbors simply don’t care.

“I think the team I’d watch most as far as Josh McDaniels goes is actually [the Chargers],” MMQB’s Albert Breer said last week on 98.5 The Sports Hub’s Zolak & Bertrand.  “I’ve just heard some stuff about potential interest there and if you look at that roster, you can win pretty quickly if you know what you’re doing there. And you’re going to have a quarterback for the next three years on a rookie contract which, I don’t know how much of [Justin Herbert] you guys have watched, but his ceiling high. This guy’s baseline might be Ben Roethlisberger. … I think there’s a lot to work with out there.”

But would McDaniels be an easy sell, even in a city where the Chargers rank a distant seventh or eighth in terms of professional franchise popularity? (Check out this Reddit thread for some of the more, um, unwelcome vibes being dished out by Chargers fans.)

In terms of offensive prowess, Sunday’s performance in Los Angeles wasn’t anything to note for the Patriots. They gained 291 total yards on offense, held the ball for more than half the game (33:41), and didn’t turn the ball over. Newton threw for a measly 69 yards; Jarrett Stidham added another 61 in mop-up duty. New England ran the ball for 165 yards, led by Damien Harris (80).

Nothing special. But the potential for avoiding incompetence is also there with McDaniels, and that’s something the Chargers desperately need right now.

If McDaniels does, indeed, have one last shot not to screw it all up as an NFL head coach, he might have it in Los Angeles, where he doesn’t have to select Tim Tebow with the 25th overall pick in the NFL Draft. He’s already got his guy.

It’s increasingly evident that the Chargers need a new one on the sideline. So, McDaniels probably looked pretty good to the front office on Sunday.

He should probably thank everybody else for camouflaging his offense’s inefficiencies as well. Because when Belichick watches this tape and wipes up the drool from his desk on Patriot Place, it isn’t going to be the offensive domination that has him so, so satisfied.

That’s just Belichick making another one of his assistants look better than they actually turn out to be at the head coaching level.

Where have we heard this one before? 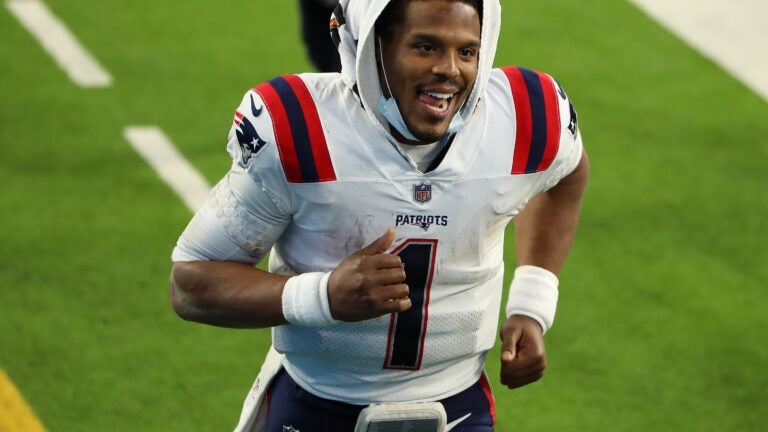