The Patriots kept playoff hopes alive on Sunday with a 45-0 rout of the Chargers. It’s New England’s first time back at .500 since the team was 2-2 in October.

Bill Belichick’s team appears to be coming together at the right time. Yet with four games remaining, the Patriots will need help to keep their streak of consecutive postseason appearances going.

With Week 13 mostly complete (the Ravens are yet to play in the AFC), the Patriots currently sit in 10th place in the conference. Only seven teams make the playoffs, meaning New England will have to leapfrog multiple opponents in the standings.

This is the current wildcard picture in the AFC:

And the Patriots’ remaining schedule is:

At the moment, The Upshot (via The New York Times) gives the Patriots a 15 percent chance at a playoff spot, while Five Thirty Eight placed New England’s odds at 14 percent.

Notably, the Patriots have worked wonders to increase playoff odds in the past five weeks. The team’s chances were at just three percent as a 2-5 team in November.

What if the Patriots go 4-0 down the stretch?

Even if Cam Newton leads the Patriots to a 4-0 record in the team’s remaining games, it wouldn’t necessarily guarantee a playoff spot, but it would make it a very likely chance. Upshot modeling gives New England a 98 percent chance at the postseason with a 10-6 record, while Five Thirty Eight places it at 92 percent.

Of course, those odds are predicated only on what the Patriots do, not including other results.

Modeling can change dramatically if — as often happens in the NFL — unpredictable results take place. A Jaguars upset over the Titans in Week 14, for example, increases the Patriots’ playoff odds by five percent, while a Dolphins upset over the Chiefs decreases it by the same amount.

Should the Patriots lose one more game, the best the odds become as a 9-7 team (minus other results) is just under 50 percent. Two losses (or anything beyond) all but mathematically eliminates New England.

While the Patriots remain on the outside of the current playoff picture, it could change quickly.

“One thing about this league is this league turns over every two weeks,” Cam Newton explained after the November loss to the Bills left New England at 2-5.

Scenarios to watch for in Week 14 (and beyond).

For the Patriots, the most hopeful scenario starts with beating the Rams on Thursday, the Chiefs beating the Dolphins on Sunday, and then winning the divisional matchup with Miami on Dec. 20. This sequence — which again, does not include numerous other results that would have major implications — would put both AFC East teams at 8-6, but with New England ahead on the head-to-head tiebreaker.

The worst case scenario in Week 14 will be a Patriots loss and wins by the Bills, Dolphins, Raiders, and Ravens, which would leave New England as an extreme long shot with just two percent playoff odds. 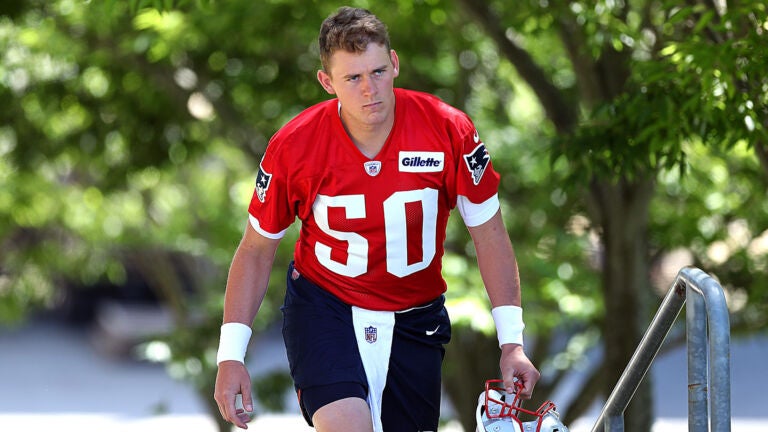