Twelve thoughts on the Patriots’ 24-3 loss to the Rams …

1. Well, it sure was fun while it lasted. In the larger sense, I mean the historic and legendary stuff, the 11 straight AFC East titles, the 11 straight Januarys with at least one playoff game to look forward to during the longest-running dynasty the NFL will ever see. I mean the annual championship dreams that six times went fulfilled. The Patriots are in a new era now, and Thursday night’s more-lopsided-than-the-score loss to the Rams, which dropped their record to 6-7, served as a harsh and probably unnecessary reminder. In the smaller sense, the fun that was also lost was the same fun that accompanied the notion, buoyed by a 45-0 clobbering of the Chargers on the same field four days earlier, that Bill Belichick was about to take his obviously flawed team on a run that might just continue right into the postseason. We know that’s not happening now. They weren’t up to it. The Rams made sure of it.

2. The Rams, arguably the most well-rounded team the Patriots have played all season, a team with some semblance of vengeance on its collective mind after being outplayed and outwitted in Super Bowl LIII two years ago, put the Patriots in their place almost immediately. Renowned for their innovative passing game, the Rams ran the ball down the Patriots’ throats in the first half, picking up 94 yards on the ground in the first quarter, building a 17-0 lead less than a minute into the second quarter, and using a ferocious defense to prevent the Patriots from ever making a game of it. If quarterback Jared Goff (16 of 25, 137 yards, 1 TD, 1 INT) wasn’t so mediocre, they might be my pick to represent the NFC in the Super Bowl. They might be anyway.

3. The Patriots fell behind 7-0 after one Rams’ possession, 10-0 after two, and never really gave themselves a chance to extend their winning streak against the Rams to seven games. Their slow start was a tribute to the Rams’ preparation and superiority in talent, and it may have also been due to an overabundance of confidence after routing Justin Herbert and the Chargers during this same Los Angeles trip four days prior. Heck, I was overconfident after watching them dismantle Anthony Lynn’s hapless team. I should have been more wary of the Patriots’ shortcomings, and I should have given the Rams more respect. The Rams went out and demanded it, making the Patriots play the role of the Chargers.

4. The start to the second half was even more disheartening than the start to the first. The Rams drove 90 yards in 16 plays, chewing 9 minutes and 42 seconds off the clock mostly behind the running of Akers, who picked up 60 of his 171 rushing yards on the drive. The touchdown, a 2-yard toss from Goff to Cooper Kupp, came one play after a neutral zone infraction by Akeem Spence on fourth and goal gave the Rams a new set of downs. That’s the kind of mistake good Patriots teams don’t make, and it’s the kind of mistake this mediocre Patriots team cannot afford to make.

5. It took the Rams less than four minutes to score more touchdowns (one) on the SoFi Stadium turf than the Chargers did in Sunday’s entire game. The Patriots defense, coming off a 45-0 shutout of the Chargers, came out looking like a team that was working on three days’ rest, with the Rams picking up 60 yards on their first two plays from scrimmage (sandwiched around a neutral-zone infraction penalty on John Simon). The Rams needed just six plays to cover 75 yards, with Goff punching it on fourth down from a yard out for the touchdown.

6. The Patriots, who aren’t exactly built to play from behind or – if we’re being honest here – utilize the forward pass, went three and out on their first possession, with Cam Newton’s third-down pass ricocheting off one of Damiere Byrd’s limbs. That led Troy Aikman to tell the hard truth, even if he did put it gently. “This is a wide receiver corps,’’ he said, “that is not the most dynamic.” Later, in the second quarter, he added: “All of these receivers are probably playing a spot above where they should be.” Wonder what he thought about the tight end group, which featured rookie tackle Justin Herron as the starter.

7. Myles Bryant, who has been flashing signs of being the next in the Patriots’ recent line of undrafted cornerbacks to emerge as a contributor, made a spectacular interception late in the first quarter, plucking the ball out of the grasp of receiver Robert Woods. For a moment Bryant appeared to have returned it for a touchdown, but upon further review he was ruled down on contact at the Rams 32. Down 10-0 at the time, it at least seemed like a decent opportunity for the offense to get that zero off the scoreboard.

8. That opportunity was long gone in the other direction after just three plays. Two Harris runs netted 13 yards to put the ball on the Rams’ 19, but disaster came when Josh McDaniels called a pass on the third play. Newton threw a short pass into the breadbasket of Rams defensive back Kenny Young, who took it 79 yards for a touchdown. The mistake wasn’t entirely Newton’s fault — intended receiver Damien Harris had been knocked off his route by the monolith known as Aaron Donald – but his struggles with accuracy on short passes continues to be both predictable and alarming at once.

9. Other missed opportunities? Besides being down 10-0 before waking up and realizing they indeed were booked to play on Thursday this week? Well, there was the failure to convert on fourth and goal from the 2 with just under 7 minutes left in the first half, when the Rams snuffed out a predictable option call and buried Newton. At this point, any defensive coordinator expecting the Patriots to throw the ball to, say, a tight end inside the 5 yard line – let alone fearing that they would execute such a play – probably shouldn’t be a defensive coordinator. Even Gregg Williams would know better.

10. The Patriots had another chance to reach the end zone with just over a minute left in the half. But a third-and-8 throw from Newton to Jakobi Meyers netted six yards – Patriots receivers have an aggravating knack for catching passes just short of the sticks. Rather than go for it on fourth and 2 from the Rams’ 11, Belichick sent reliable Nick Folk out for the 29-yard field goal. It was the right call, but there were points that they left on the field.

11. The Patriots’ best player Thursday – and this is not the first time this has happened this season – was punter Jake Bailey. He punted six times for a 51.7-yard average, placing four inside the 20, including a career-long 71 yarder in the fourth quarter. It’s not often that rocket-legged Rams Johnny Hekker is the second-best punter in a given game, but that was the case Thursday night.

12. With Newton struggling and reportedly dealing with a painful abdomen injury,  and Jarrett Stidham getting the call with 10 minutes left to play, it’s inevitable that there will be plenty of debate about whether there should be a quarterback change this week. Stidham completed 5 of 7 passes in his limited time, but took two sacks and picked up just 27 yards in the air. I’d still rather watch Newton. But one more game like this, and I might start wondering if it’s time to bring back Michael Bishop for another chance. 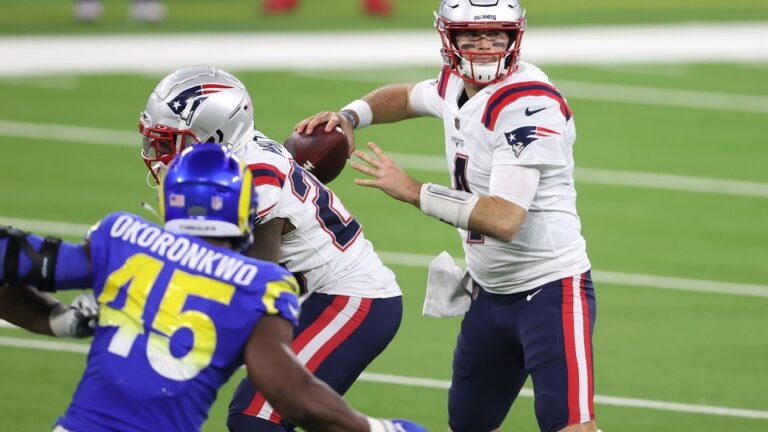 5 takeaways following the Patriots’ loss to the Rams