The New England Patriots are very unlikely to make the postseason, which has led many analysts to wonder whether they might give back-up quarterback Jarrett Stidham a closer look over Cam Newton in their last three contests.

According to NBC Sports Boston’s Tom Curran, however, Stidham has done little to distinguish himself for Patriots decision-makers.

“My opinion is now much more informed now than it was then: Stidham, in the eyes of the team, was a relief pitcher on Thursday,” Curran said on a recent episode of his podcast. “They weren’t disgusted with Cam. They more or less felt as if they had had enough. So, Bill went to the mound, asked for the ball, gave him a pat on the butt, put it in Stidham’s glove and said, ‘Finish it up for us. See how you do.'”

Newton was 9-for-16 against the Rams, but he threw a costly pick-six and the Patriots’ offense never got going in a 24-3 loss. Stidham entered the game with 10 minutes remaining in the fourth quarter.

“And he didn’t really do anything with it,” Curran said. “He did nothing to change their estimation of him as a competitor or a quarterback. And really, it’s status quo. … They’re just begging him to have his ‘Jimmy [Garoppolo] against the Kansas City Chiefs’ moment, and he continues to not have it. Hence, it’s Cam. And in my opinion, it should be.”

The 24-year-old quarterback is 18-for-33 for 212 yards with two touchdowns and three interceptions this season.

“Jarrett has worked hard,” Belichick said. “He’s tried to take advantage of his opportunities. But that’s not really the point.” 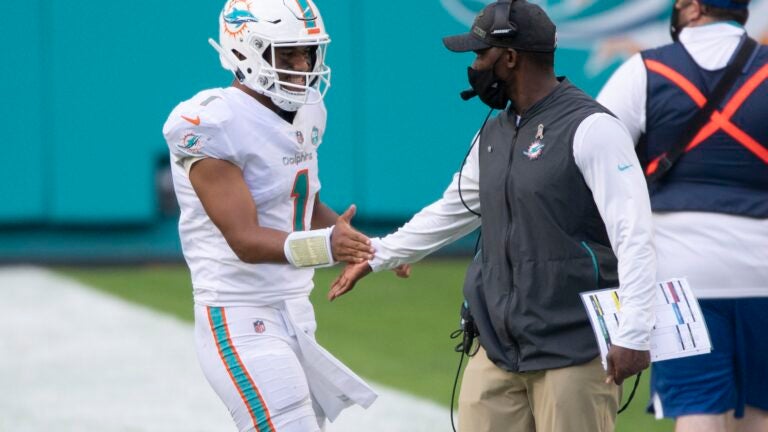 4 things to know about the Miami Dolphins, who are fighting for a playoff berth