For the Miami Dolphins, Sunday’s win over the New England Patriots accomplished two things: It eliminated a division rival from playoff contention, and it put the Dolphins in control of their own postseason destiny. Two more wins, and Miami is in.

But the Dolphins didn’t eliminate just any division rival: They eliminated the Patriots, who have only missed the playoffs three times since 2000 and hadn’t been on the outside looking in since 2008. Sure, the starting quarterback is different, but the jerseys look the same.

“It’s another game when you think about it, but not really,” Dolphins center Michael Deiter said. “It’s a division game against the Patriots. That’s always a rival game, and it’s on our way to where we want to go [in the] postseason. It’s a big game. We had to go out there and make plays, and take it one play at a time.”

New England connections dot the Miami roster. Head coach Brian Flores got his start in New England as a scouting assistant in 2004, working his way up until taking over defensive play-calling duties from Matt Patricia in 2018. Star defensive end Christian Wilkins grew up a Patriots fan in nearby Springfield. The Patriots traded for wide receiver Isaiah Ford in early November, but Ford never played and was waived earlier this month. The Dolphins signed Ford again, and he made three catches for 18 yards against New England on Sunday.

“I think the biggest thing is just love and care,” Wilkins said, when asked about Miami’s recent success. “We’ve got a lot of guys who love football, who love each other, care for each other, and just want to win. When you’ve got that, it’s easy to play for the guys next to you, the guys around you, and for the guys on the other side of the ball. That’s really what we’ve got. We’re just a family, so that’s what we try to do.”

All afternoon, the Patriots struggled to stop Miami’s running game, which produced 250 yards and all three of the Dolphins’ touchdowns on 42 carries. Salvon Ahmed became the first player on Miami’s roster to top 100 yards in a single game, picking up 122.

Flores was asked what it means to secure a winning season in just his second year at the helm.

“They should be proud of themselves,” Flores said. “That’s a tough, well-coached team over there. We played well today.

“It’s always good to win. That’s why these guys put [in] all the blood, sweat and tears, that’s why they prepare so hard, and practice so hard, and lift the weights. Not so much for me, but for this team, and these players and what they put in, the effort they put into trying to go out there and execute, I’m just happy for these guys.” 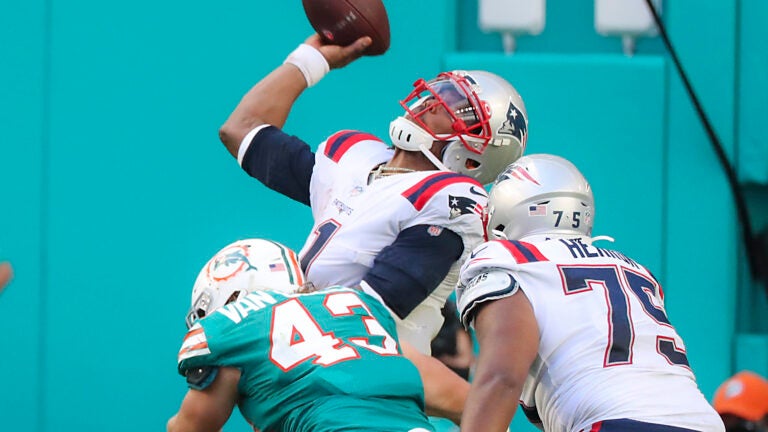