1. So the probable is now official. The Patriots, who entered Sunday with playoff hopes that had about the same chance of happening as Cam Newton throwing a perfect screen pass, are officially eliminated, just as they deserve to be. Brian Flores’s upstart Dolphins shoved the football down the Patriots’ collective esophagus, running 42 times for 250 yards, despite coming into the game with an injury-depleted offense that wasn’t supposed to remind anyone of the days of Larry Csonka, Mercury Morris and Jim Kiick. The Dolphins aren’t a great team, but they’re a superior one to the Patriots, even when refugees from the bottom of the depth chart like Salvon Ahmed (122 rushing yards), Lynn Bowden Jr. (team-high six catches), and Durham Smythe (five receptions) are forced into lead roles.

2. It’s sad to see the Patriots’ run of 11 straight playoff appearances and 19 straight winning seasons come to an end. How long has it been since the Patriots last missed the playoffs? In 2008, 31-year-old Tom Brady had a fresh scar on his knee and an uncertain future, Flores was a Patriots special teams assistant, and Newton was behind Tim Tebow and someone named John Brantley on the University of Florida quarterback depth chart. But make no mistake: the ending is appropriate. The right team won on Sunday. And the right teams will play on in the postseason.

3. It’s been fun and enlightening in a lot of ways to have Newton around this season, and in those first couple of weeks it seemed like this could work in a satisfying way. But he just can’t throw the ball with the timing, touch, and accuracy necessary to succeed in the passing-oriented NFL. Because of this, it just feels hopeless whenever the Patriots fall behind, as they did in the second half after holding the Dolphins scoreless in the first. All right, I’ll say it: Might as well play Jarrett Stidham now.

4. The Patriots received some decent performances on offense. Sony Michel did a fine job stepping in for Damien Harris, running for 74 yards on 10 carries. Jakobi Meyers had his moments, with a 36-yard catch among his 111 receiving yards, though he also lost a fumble. But the all-field-goal offense just isn’t going to get it done. And that’s what their offense was on Sunday, because the quarterback, even on days when he has OK numbers (17 of 27, 209 yards) can’t do anything with any consistency.

5. The Patriots’ run defense has been adequate at times. They came in allowing 124 rushing yards per game, 23d in the league. They’ve had some brutal games; the Niners ran for 197 yards against them in Week 7 and the Bills for 190 in Week 8. But they’ve also held five opponents to under 100 rushing yards, including the Dolphins to 87 in the opener. With Cam Akers running for 171 of the Rams’ 186 yards on the ground last week, one of the questions entering Sunday was whether Miami, which came in averaging just 3.6 yards per carry, would be able to find the same holes in the Patriots’ run defense.

6. As it turned out, they didn’t just find holes, they blew holes in the Patriots’ run defense whenever they needed them. It took a while – the Dolphins ran for 75 yards before halftime and 175 after — but once the Dolphins got momentum in the running game, the Patriots had no solutions. The Dolphins committed to it more immediately in the second half, and it paid off over and over again. On their first possession after the break, the Dolphins marched down the field on nine plays – eight of them runs, including Ahmed’s 1-yard touchdown run, which gave them a 7-6 lead. The Dolphins covered 72 yards on the drive, 62 on the ground.

7. They won the game because they stuck with the run, and the Patriots, who lost Ja’Whaun Bentley to an arm injury early, had no solutions. Tagovailoa put the Dolphins up 15-9 with a nifty run on third-and-goal from the 3 with 12:55 left to play. That touchdown punctuated a 14-play, 90-yard drive that included nine runs for 71 yards, including a 31-yard burst by Ahmed. Tagovailoa added a second touchdown run with just over three minutes, giving Miami a 10-point lead (22-12) that might as well have been 100. Terez Hall was valiant, with 13 tackles (12 solo), but man, does this team ever need some linebackers.

8. The offense has been so inept that it’s getting to the point where we’re waiting for the inevitable three-and-out to be over with so we can have the fun of watching Jake Bailey punt. He won two AFC Special Teams Player of the Week awards last season, but hasn’t won it this season. He could have last week after a performance against the Rams that included a 71-yard punt. He had a couple more beauties in this one, including a first-quarter punt that pinned Miami on its own 2. Yes, it’s the new reality: the Patriots’ best player might be their punter.

9. The kicker hasn’t been bad either. Nick Folk was the entire offense, going 4 for 4 on field goal attempts and extending his string to 25 straight makes, a career-best. Folk, 36, has done a heck of a job for a guy who made 55 percent of his field goals for the 2017 Bucs, was out of the NFL in ’18, last kicked for the Arizona Hotshots of the Alliance of American Football, and got the call last year only after Mike Nugent blew his audition.

10. One thing I was hoping to see Sunday and would like to see over the final two games is an obvious effort to involve rookie tight ends Dalton Keene and Devin Asiasi. Both were active Sunday, but they were again either afterthoughts or ineffective, combined for one catch (by Keene) for two yards on three targets. Asiasi dropped a catchable ball with room to run on the second possession. Between them, the pair of third-round picks has two catches, both by Keene.  There have been several factors that have held them back – no training camp, injury, Newton’s inability to find them when they are open – but it’s important to get a clue now regarding whether either can play.

11. In the early going, it looked like Tagovailoa might join the long list of rookie quarterbacks to be flummoxed by Belichick. The Dolphins went 95 yards on 15 plays on their second possession, chewing 9 minutes and 11 seconds off the clock, and still ended up with a zero on the scoreboard. Tagovailoa, hit by Chase Winovich, forced a throw to the end zone that was picked off by the ever-opportunistic J.C. Jackson.

12. The pick was Jackson’s eighth of the season, and it was the first glaring example in this game of the kind of blunders young quarterbacks can make against Belichick. Tagovailoa recovered nicely, completing 20 of 26 passes for 145 yards and adding his two rushing touchdowns. Hard to believe now that this team shut down Justin Herbert just two weeks ago. Hard to believe a lot of things right now. 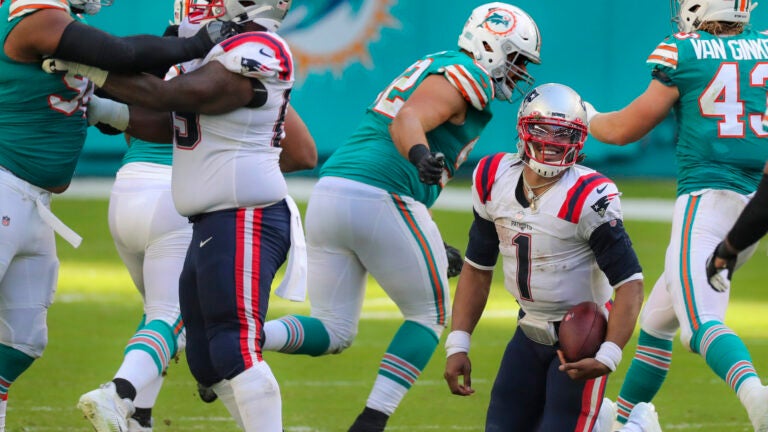