For the first time since Tom Brady tore his ACL in 2008, the New England Patriots won’t be in the playoffs this year.

The Patriots lost to the Miami Dolphins 22-12 on Sunday, officially cutting off New England’s last shot at a playoff appearance.

So what does Brady think about this? Predictably, he had little to say in his post-game comments, after the Buccaneers defeated the Atlanta Falcons on Sunday.

“As far as the Patriots, they have their own thing going,” Brady told reporters. “I’ve really been focused on how my play needs to be at quarterback, the execution I need. They’re not really an opponent of mine.

“Obviously I have a lot of friends there, a lot of great relationships, but they’ve been focused on what they need to do and I’ve been trying to focus on what my job is.”

Brady has now twice dodged questions about his former team’s failures this season.

“I wish everybody the best all the time,” Brady said earlier this year when the Patriots started 2-5. “I don’t ever wish for anyone to not perform at their best.”

The Patriots are now 6-8. Brady’s replacement, Cam Newton, was asked about missing the postseason in his own postgame comments.

“Obviously we know what the standard is around here,” Newton said. “Doesn’t take a person that’s oblivious or been living under a rock to understand that. But we just came up short. That doesn’t mean we’re not good enough, because we are. We just didn’t show it.”

Before Sunday’s game, Brady had thrown for 3,496 yards and 30 touchdowns this season, with 11 interceptions. Newton threw for 2,172 yards with five touchdowns and 10 interceptions prior to Sunday’s loss. 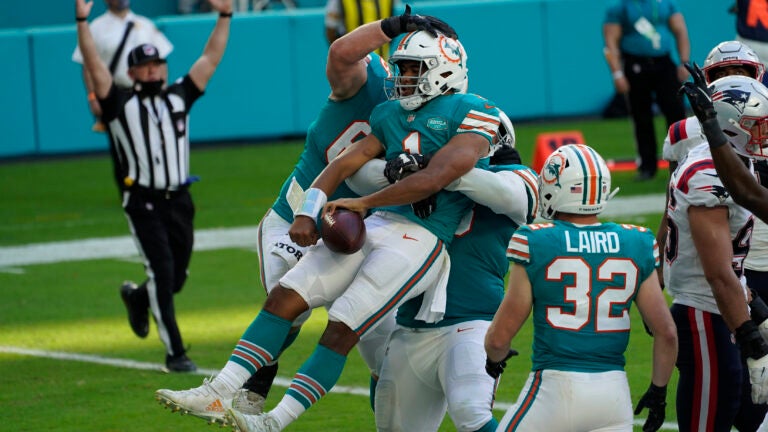 ‘It’s another game when you think about it, but not really’: Dolphins react to beating Patriots