The message emblazoned on Cam Newton’s game-worn gear might have been obscure to many fans. “Peace for Armenians,” read the cleats worn last month by the New England Patriots quarterback. But it was just the latest gesture of international advocacy by a team famous for its hyperfocus on football, made in support of an employee who operates mostly behind the scenes.

Berj Najarian’s title with the Patriots is director of football/head coach administration, but for the length of Bill Belichick’s tenure in New England he could be just as accurately called the coach’s right-hand man. Najarian’s broad duties entail being “the point person for day-to-day operations of the team” and “a liaison across football and non-football departments,” according to the Patriots website. In a New York Times profile, former Belichick assistant Bill O’Brien referred to Najarian as the team’s Belichick’s “consigliere”; owner Robert Kraft called him “one of our hidden weapons.”

Najarian is also an Armenian American whose grandfather was a genocide survivor who lost his parents at age 10. The team’s support for Armenia, which lies in western Asia just east of Turkey, has been on discreet display before, such as when Belichick work a lapel pin of the Armenian flag during the team’s 2015 visit to the White House. But Najarian’s efforts, and by extension the Patriots’, have become more open in recent months, as fresh warfare with neighboring Azerbaijan erupted from the countries’ decades-long conflict.

His Instagram feed is largely devoted to the Armenian cause. He has spoken to Patriots players about it, and has put up an Armenian flag in his office. “It really hit me, seeing everything,” Najarian said (via the Armenian Mirror-Spectator), adding that he began using social media as he became bolder, with the coach’s support.

As players saw the flag, they became interested, too. “Honestly, I think a lot of it goes back to the fact that our players are very socially conscious,” Najarian said. “They do a lot of work in the community, which has especially intensified this year. This goes back to the spring, when a lot of things were happening around the country in terms of social justice and racism.”

Newton brought the reminder to his feet during the NFL’s annual “My Cleats, My Cause” campaign in which players personalize their cleats for charities, social justice initiatives and issues close to their hearts. The shoes are up for auction online to benefit the U.S.-based Fund for Armenia. . As of Dec. 23, the highest bid was $8,700.

The advocacy has even rubbed off on the publicly reticent Belichick, who first met Najarian in the 1990s through the New York Jets. Belichick work the lapel pin to the White House one day before the observance of the 100th anniversary of the start of the Armenian genocide, during which by some estimates 1.5 million ethnic Armenians were killed in Turkey and adjoining regions.

“It was a no-brainer,” Najarian said of Belichick’s gesture during an appearance that year at St. James Armenian Church Men’s Club in Watertown, Mass. “He knew the pin, and recognized it. I’ve told him about my grandfather.”

Congress had recognized the killings as a genocide the year before, and Najarian seized the opportunity to press Obama about his administration’s decision to stop short of calling it a genocide in its official statement. “That’s a tough one,” Obama reportedly responded. “I am trying to prevent future genocides.” Najarian pressed on. “What about the Pope?” he asked. “Well, the Pope doesn’t have a government to run like I do.”

Belichick made more public gestures this fall. On Oct. 31, he issued on Instagram a statement of support for Armenians in the nation’s conflict with Azerbaijan over the disputed region of Nagorno-Karabakh, saying, “I hope and pray for peace, justice and the safety of the brave soldiers who are fighting for their nation’s recognition and freedom,” and asking for donations to the Armenia Fund.

On Nov. 17, days after Armenia and Azerbaijan agreed to a Russian-brokered cease-fire, Belichick seized on an opportunity on Nov. 17 at one of his weekly news conferences. He was asked an innocuous question about a letter sent by acting defense secretary Christopher C. Miller in which Miller quoted Belichick by telling employees to “do their jobs.”

“I’d just say, while we’re on the subject, I read [Miller’s] point about combating [transnational] threats, and I couldn’t help but think and hope . . . I hope that our country will take action against Turkey and Azerbaijan for their unprovoked and deadly attacks on Armenians,” Belichick told reporters (via the Boston Globe). “We’ve seen when humanitarian crises and things like that, like ethnic cleansing, go unpunished, they just continue to happen. I hope that we can put a stop to that.” 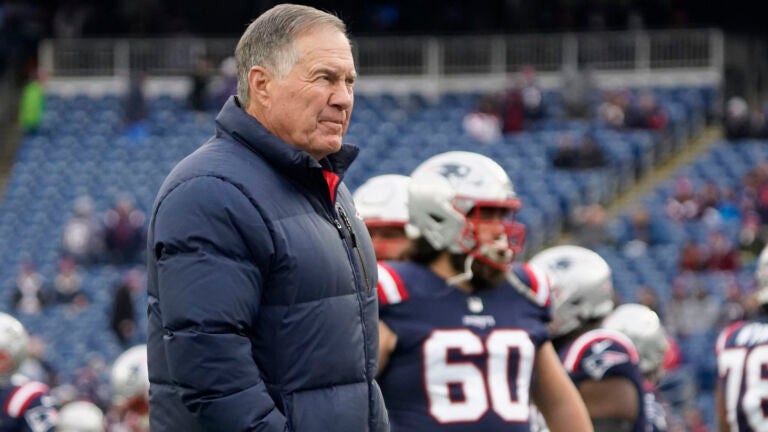