Five takeaways from the Patriots’ 28-14 win over the Jets, which ends Bill Belichick’s first post-Tom Brady season with a record of 7-9 …

A GOING AWAY GIFT FOR CAM

If Bill Belichick’s decision to stick with Cam Newton to the bitter end was really about rewarding a respected veteran who signed a bargain-basement deal and bought in, then Sunday met its objective wonderfully. The Patriots gave the quarterback reason to flash that gigawatt smile a few times, and experience a little bit of enjoyment on his way out of Foxborough.

For sure there were frustrations on Sunday. Don’t get that confused. After a nice opening sequence, the Patriots punted on five straight possessions. Newton was under consistent pressure and couldn’t get much going through the air. Into the third quarter, a day that began with ESPN’s Adam Schefter suggesting that the Pats had decided this would be his last game in New England was exhibiting exactly why that choice should be a no-brainer.

But in the end, Newton got to wave goodbye to the Minuteman Militia with a giant, toothy grin. His final three legitimate drives all went for touchdowns, the first capped when he caught a touchdown pass from receiver Jakobi Meyers. After that, he threw for two scores, one to Devin Asiasi and one to Sony Michel. Add it to an earlier scoring connection with James White, and all three hauled in their first touchdown catch of the season.

After 14 starts, Newton had five scoring passes; in his 15th start, he accounted for almost 38 percent of his season total. He threw for 242 yards, one fewer than he had in the two previous weeks combined, and his fourth-highest total of the season. He also ran for a team-high 79 yards (including a 49-yard gainer) as the Patriots more than doubled the yards from scrimmage (404) they had managed a week earlier against the Bills (201).

Earlier in the week, Newton received the Ron Hobson Media Good Guy award from the cartel who cover the Patriots. From all reports, he was the consummate teammate and captain throughout this season, accountable both publicly and reportedly behind the scenes. He struggled on the field, but Belichick’s refusal to bench him suggests the coach believed he deserved the chance to leave the Patriots on a high note. There’s a lot of bad tape for teams to consider before they sign Newton for next year, but now there’s some decent film out there from the second half of the season, as well.

A long offseason begins Monday, as both the Patriots and Newton begin to confront their respective crossroads. But at least both can move in that direction — separately — feeling positive about the finale of their partnership.

TRICKS WERE A TREAT ALL SEASON

As the overseer of one of the NFL’s worst offenses, Josh McDaniels has been subject to some criticism this season. Along those lines, it’ll be interesting to see whether the Patriots’ struggles this season have damaged his prospects to secure the head-coaching job that he professes to desire. From this view, they shouldn’t; if anything, he has spent this fall working to become the world’s foremost chicken salad chef.

But if there’s anywhere McDaniels’s 2020 performance should be beyond reproach, it’s in the realm of trick plays — where his design and timing have been impeccable, with Sunday’s game-swinging strike from Jakobi Meyers to Newton adding to the body of evidence.

It was Meyers’s second touchdown pass of the season, which at the time represented 20 percent of the team’s TD tosses. His other came against the Ravens, in Week 10, to Rex Burkhead — then the next week the Pats got a key early first down with a double-pass to Damiere Byrd against the Texans. Even when Byrd dropped what would’ve been another big gain on a trick play in Week 16 against the Bills, that was about the execution, not the call itself.

Add in the two Julian Edelman completions that jump-started a stagnant attack in the October loss to Denver, the variety of end-around and reverse runs, and it’s all a credit to McDaniels. In a way it’s a tacit acknowledgement that this wasn’t a Patriots team that could move the ball and make big plays conventionally, and raises some question as to why the coordinator wasn’t more aggressively creative in the course of play, though when he decided it was time to push the envelope, he was almost always right. And his guys were ready.

Until Sunday, Sony Michel hadn’t carried the ball more than 10 times in any game this season. That can’t be how the Patriots or the Georgia product envisioned Year 3 going for a former first-round pick whose six-score postseason had him looking like a bell-cow back after his rookie season.

Yet, as Michel looks ahead to 2021, and a pivotal campaign in his presumptive quest to get paid in his second contract, he at least finished the year strong enough to suggest he deserves a place in the Patriots’ plans as they prepare to rebuild between now and the fall.

Damien Harris has usurped Michel as the team’s starter, though Harris — like Michel — has had trouble staying on the field, and in his absence Michel has seized the opportunity to reestablish himself. Over recent weeks he has appeared to run with the purpose of a player who recognizes that his job is on the line, and has used that better burst and physical finish to produce.

Coming off a couple of performances against the Dolphins and Bills that netted 143 yards on 20 totes, he was especially effective on Sunday’s opening series against the Jets. By the end of the day he had hauled it 16 times for 76 yards, and with that he capped the season by averaging nearly six yards per carry. He also added three catches, including a 31-yard swing-and-scamper score, working against the narrative that the Pats are too predictably run-heavy when he’s on the field, and was even split wide on a number of snaps that the ball didn’t ultimately go his way.

Michel hasn’t flashed enough to dislodge Harris, if both begin next year healthy. (That’s a big if.) And James White, rewarded with his first touchdown catch on Sunday, should still retain his regular role regardless of who the next Pats’ quarterback might be. But taking Michel’s recent performance in conjunction with his earlier-season flashes, and he’s at least provided some reassurance that he belongs — on both the roster and in New England’s running back rotation.

THE JETS REMAIN A CAUTIONARY TALE

While the Patriots could’ve improved their draft slot with a loss Sunday, avoiding the indignity of a double-digit-loss season may ultimately matter more as the club attempts to retain its longstanding culture of winning. Plus, fortunate drafting position is no guarantee of success. Just look at the Jets.

The Jets are a mess. Still. They thought they were drafting their quarterback of the future a few years ago when they tabbed Sam Darnold, and yet here they are on the cusp of an offseason that’ll begin with the firing of their coach, and at some point include a decision of whether to trade Darnold or trade the No. 2 overall pick.

New York picked in the top six four times from 2015-19, then selected at No. 11 this past spring. They’ve actually done relatively well with those picks, too — though they still started this season 0-13, and finished it 2-14. Losing has permeated that franchise for too long. It is ingrained in who they are, and as much bellyaching has been done around here about the Patriots’ impending rebuild, the Jets are starting the same process from a place where they probably need to change attitudes first and worry about changing players much later.

Does finishing 7-9, rather than 6-10, really matter much for the Patriots? It’s unknown. But it does say something that they prepared themselves effectively with vacation pending, that they kept competing to the final whistle, and that they never folded in on themselves as things fell apart. They made sure that’s still not the Patriot Way.

And left that level of embarrassment for teams like the Jets to contend with.

WAS IT A DISAPPOINTMENT? PROBABLY NOT

After the game, Belichick described the season as disappointing, citing the fact that this was not how the team envisioned things ending. It certainly wasn’t familiar territory, considering that it marked the first time since 2000 that the Patriots entered their regular-season finale knowing it would be their last game.

Though was this really a disappointing season? Or was it more realistically an outcome that could’ve been expected, given everything that worked against their goals of success dating back to last spring, and the roster they’ve been left with after a sequence of recent draft failures?

The cupboard is so bare that it’s still unclear where the young core of this team is going to come from. They had almost no salary cap space when free agency began. They were, of course, replacing the greatest quarterback of all time. They were dealing with Covid-19 in a variety of ways, not the least of which was trying to immerse their new QB in an offseason without in-person workouts, and then of course there were significant opt outs that further depleted the talent pool.

They paid a million bucks for the last viable veteran quarterback available, signed him in the middle of the summer, then asked him to make the most of a receiver room lacking big-play weapons and a tight end room that might as well have been empty. Then that quarterback played at a level lower than they could’ve reasonably envisioned the floor to be when they struck their deal.

The streaks are all over — the playoff appearances, the division titles, the winning seasons. But at 7-9, they were a poor, practice-free performance against Denver from .500. They were a few late-game plays from getting to 9-7, and at least remaining part of the playoff conversation until the conclusion.

So, yes, it is disappointing to see the Patriots where they’re at. But is their final record, and their rank among the middle of the pack a disappointment. Not exactly. 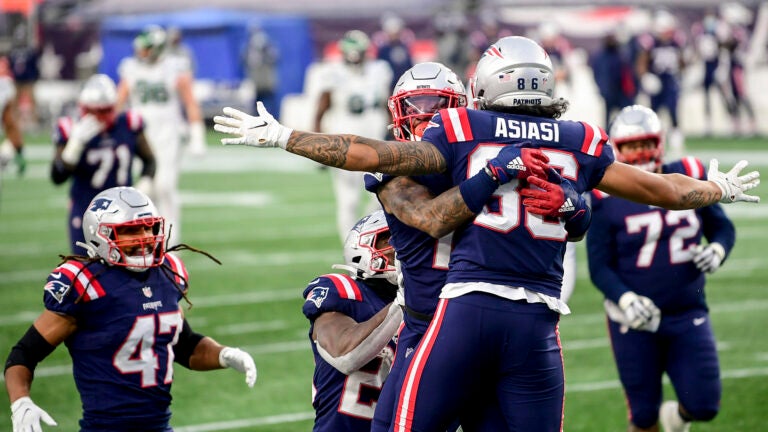