Cameras caught Robert and Jonathan Kraft in the midst of Sunday’s Jets-Patriots game at Gillette Stadium, as is the norm during a CBS broadcast. Besides noting that Bob needs a lesson on how to secure his mask around his nose, there was another matter that the television crew should have discussed during that moment, at least aside from the shameful fawning of New England ownership that is a weekly requirement.

It’s been quite some time since we’ve heard from either Robert or Jonathan. When the going is good, it’s hard to escape the gregariousness of the elder Kraft, talking about the joy of hot dogs and giving smooches. But during his team’s first losing season in two decades, all we’ve seen of Bob is the owner’s box shot, usually as his offensively-challenged team was being beaten before an empty stadium below.

The Patriots ended their dreadful 2020 season Sunday with an entertaining 28-14 win over the New York Jets to finish 7-9. Cam Newton was dazzling, tossing three touchdowns, catching another from Jakobi Meyers, and running for 79 yards. It was a good game to add to his 2020 highlight reel, which is, admittedly, very short, most likely consisting of only his first and last games in a Patriots uniform.

Clearly, Newton won’t be back unless he’s willing to accept a backup role at this point in his career. The Patriots will move on, possibly drafting one of Justin Fields, Zach Wilson, Mac Jones, Trey Lance, or Kyle Trask to be their quarterback of the future. The likes of Mitch Trubisky, Josh Rosen, or Jimmy Garoppolo will come on board to try and begin the next phase of the Patriots franchise.

But the problems facing the New England Patriots go far deeper than who Bill Belichick is going to pick to play quarterback. On-field personnel issues aside, the team is in the midst of an identity crisis that it didn’t have to really address during the 2020 season, not with the stands bereft of paying customers.

We don’t get weekly emails from the Patriots, touting the historic levels of their television ratings, any longer. That’s because Patriot “fans” are watching their team less and less. Case in point; last Monday’s loss to the Bills did a whopping 49.5 rating in Buffalo.

There’s a lot more to be excited about these days in Buffalo, and it’s safe to guess that the roles were reversed a year ago. But that’s only a small indication of where the Patriots are headed in the minds of the New England market. Not surprisingly, a host of Foxborough regulars, normally clad in red, white, and blue, have followed their messiah to Florida, trading in for the creamsicle and pewter classics of a playoff-bound team.

That was bound to happen. The bigger dilemma facing the Patriots is whether or not they can return to viability quickly enough to not lose more ground in the minds of the New England sports fan.

They lost plenty of it in 2020, some through no fault of their own. The Patriots had a league-high eight players (Marcus Cannon, Dont’a Hightower, Patrick Chung, Matt LaCosse, Brandon Bolden, Dan Vitale, Marquise Lee, and Najee Toran) opt-out prior to the season due to COVID-19 concerns. Plenty of it was their own doing. Like Belichick not drafting a quarterback and waiting until July to figure out that Jarrett Stidham might not be ready to take over.

Call it a bridge year if you’d like, but such a term diminishes the challenge of the work that the Patriots have ahead of them. Wide receiver N’Keal Harry serves as a billboard of sorts for why Patriot fans should be dubious. Belichick’s drafting history is iffy at best, and here he is, in charge of selecting the first pieces of a new era on Route One. By the time that happens, Josh McDaniels could be putting the pieces together with the Chargers or whatever other team might take a stab at the offensive coordinator. Can Belichick pick the right QB without his input?

Can he not waste draft capital on positional players who either can’t grasp the system or are not adaptable to the NFL? Can he use the Patriots’ sudden windfall in cap space ($62.8 million) to steal free agent Chris Godwin away from Tampa Bay in time for their showdown next season? Will Belichick-fave Hunter Henry sign on and fill in the cavernous hole left at tight end?

This isn’t a rebuild. The Patriots’ injured reserve reads like an “In Memoriam” at the Oscars. Julian Edelman. Rex Burkhead. Stephon Gilmore. Isaiah Wynn. David Andrews. Shaq Mason. The list goes on.

But it’s imperative to select the right pieces in both free agency and the draft to fix this ship before it sinks. It’s up for debate whether Belichick, the greatest coach of his time, and a suspect general manager, can pull that off.

These are a pivotal few months for the Patriots franchise, a period during which the team will either plug the holes, or dig deeper into an irrelevancy it has never experienced under Kraft’s ownership. Bob, Jonathan, Belichick, Newton, and everybody else under the Patriots’ subpar umbrella never heard any reaction from the fans because they were never there. It was like this season happened in a self-absorbed bubble. Which wasn’t the worst thing for everybody involved, based on the performance.

But it’s also concerning that the team goes into this offseason without that pulse at the forefront of their minds. There might be less pressure to get things done, mainly, because that pressure was sitting on a couch at home, inundated with insurance commercials.

On that note, it’d be nice to know what the Krafts were thinking in terms of spending money next season, their faith in the coaching staff, and to get a general soothing of the angst that inhabits its fan base.

What happens next? It’s the most important question in New England sports.

If the team get the answers wrong, then the balance of power has indeed shifted for the foreseeable future in the AFC East.
And, as we’ve already noticed this season, the fans will likely follow. 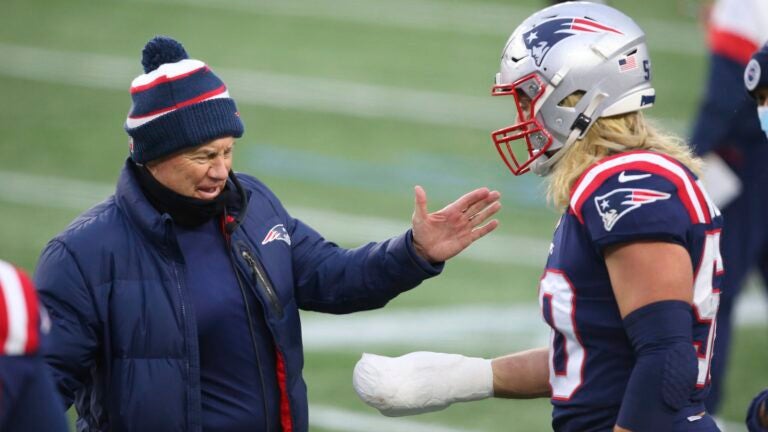