Sure, it took a couple of days of digging after the Patriots’ first losing season since 2000 concluded, but I’ve finally found it — the one stat guaranteed to convince you that Cam Newton should get a sequel as their quarterback. That’s right. Guaranteed.

Ready? Actually, you’ll never truly be ready for this mind-blowing factoid, but I’m going to deliver it anyway.

Newton had as many games this season with a quarterback rating of 94 or higher — six — as a certain accomplished fellow named Thomas Edward Patrick Brady Jr. had during the 2019 season.

Even if you, me, and perhaps even the person who got carried away with the ol’ Texas Instrument and invented quarterback rating require a user’s guide to remember the variables that go into the statistic, it fits the narrative I’m looking for in this particular case, and that’s how statistics are supposed to be deployed, right?

Right. And therefore the conclusion is unassailable: Cam Newton at his best this season was as good as Tom Brady at his best last season. And therefore, the Patriots quarterback situation is solved from inside the house.

Now, with that settled, let’s move on to unsolved roster-building questions. How many free agent wide receivers should they sign for his arsenal? Two or three? Allen Robinson and Curtis Samuel, you say? What about …

Oh, all right, fine. Maybe there’s a little pretzel logic in my Newton theory, some lies and damned lies being boldly told with that statistic, maybe even a dollop or two of facetiousness.

Guilty on all counts. But there are a couple of points of sincerity here, drowning in my usual nonsense.

▪ I was genuinely stunned to discover that statistic, and this one too: Newton’s 127.4 rating in the 28-14 win over the Jets Sunday was the highest by a Patriots quarterback since Brady’s 133.8 rating in the 2018 regular-season finale, a 38-3 win over, yes, the Jets.

And Newton’s rating — after going 21 of 30 for 242 yards and three touchdowns — doesn’t include his rushing contributions (a team-high 79 yards) or his receiving touchdown, for that matter. At least we can agree he has much better hands than Brady.

▪ I know bringing Newton back is not the ideal thing to do. Yet I think I’d like it if they did.

Maybe that’s just one more weird justification in a season of strange juxtapositions. The Patriots, by their usual dynastic standards, had a brutal season. Some of that fell on the quarterback.

Newton did run for 592 yards and 12 touchdowns, but when you’re citing a QB’s rushing stats first in this golden era of passing, you’re trying to hide something. And frankly, the truth can’t be hidden. The Patriots had an inept passing game.

Newton averaged just under 178 passing yards per game, with four games under 100 yards. He threw just eight touchdown passes — one fewer than Matt Cavanaugh threw during the 1980 season, when he started four games — while getting picked off 10 times. And in this case, the statistics confirm what our eyes told us.

Whether it was due to a loss of arm strength, unfamiliarity with the Patriots system, a feeble receiving corps that left you wondering whether 49-year-old assistant coach Troy Brown might be able to go out and run a few third-down routes, bad habits that he can no longer overcome with otherworldly athleticism, or all of the above, Newton did not approach even being an adequate passer in an age when even adequate quarterbacks are putting up big numbers (18 QBs threw for more than 3,500 yards this season, and 16 threw at least 26 touchdown passes).

Yet despite the underwhelming performance, it was fun having the former MVP around. Much is made about his engaging demeanor, and by all accounts he was a pleasure to deal with, but I think the response to his good nature reflects more on the media’s misreading of who he was with the Panthers than any change in personality.

It’s annoying, to say the least, when people don’t believe things until they personally experience something or are affected. We should have known before we experienced it that Newton is a gem.

It seems more probable than not (to borrow a ridiculous phrase) that Newton won’t be back. But I don’t think the door is closed, either. There’s too much at play to say no to anything right now. There are so many macro and micro variables to this offseason. The Patriots have 25 free agents of their own, could have about $60 million in cap space, have a roster in desperate need of a talent influx at multiple skill positions, and are led by a 68-year-old coach chasing the all-time wins record.

This is not going to be a slow rebuild, and it shouldn’t be. The Patriots won seven games with a roster that probably should have won five. They have the coach. Bring in the talent to enhance the half-dozen young core players already here, and let’s just say the Bills and Dolphins shouldn’t get too comfortable in their new perches.

Of course, quarterback should be the first priority, and there are intriguing options, from veteran free agents of various levels of accomplishment to trade targets and cap casualties. And the Patriots probably ought to spend a draft pick on a quarterback as well, even though we all should prepare for that 15th pick to be used on an interior lineman.

The hunch here: They’d love to bring back Jimmy Garoppolo while getting a quarterback in the draft right around where they took Jimmy G back in ’14.

I can’t recall a Patriots offseason in which there was so much roster work to do. Even entering the 2001 season, when Belichick signed 20-plus veteran free agents, the Patriots already had the quarterback in place, with Drew Bledsoe having just signed a nine-figure contract and that scrawny Brady kid lurking while climbing the depth chart, unbeknownst to us.

There is a path by which Newton ends up back here — if Belichick’s plans to find a more conventional passer fall through, and Newton can’t find a starting job elsewhere. The odds are long, but perhaps with good health, another year in the system, and an upgrade in weapons, there’s at least a chance Newton could resemble the player he was in his prime with the Panthers.

What’s that? Right — back when his stats were so breathtaking that there was no need to search for a particular one to help rationalize having him around. I offer no apologies. 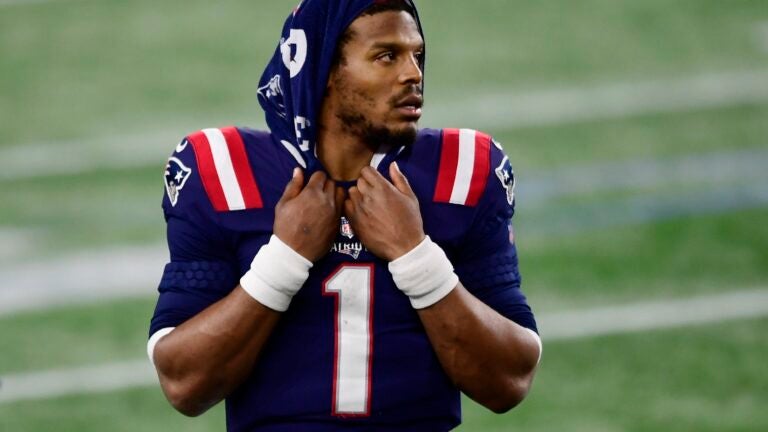