After Alabama claimed the college football title on Monday, experts began releasing mock drafts projecting what direction teams will go in the first round.

The New England Patriots have an obvious roster hole heading into the 2021 NFL Draft at quarterback, where Cam Newton is not expected to return next season, but they have other needs as well. Here’s what two experts see the Patriots doing with the No. 15 pick.

Unlike quarterbacks projected to go ahead of him, Lance didn’t play for a high-profile school. Still, he’s an intriguing prospect. NFL.com’s Daniel Jeremiah compared him to Andrew Luck, noting the unique fearlessness (without being reckless) inherent in both players. Jeremiah added that he loves Wilson’s poise, accuracy, decision-making, play-making, and toughness.

So why is Lance so low? Two reasons. First, few NFL prospects play their college ball in Fargo, ND despite NDSU’s status as a FCS powerhouse. Second, last year was Lance’s first as a starting quarterback. Many NFL teams might like another year of to boost the sample size before they use a first-round pick on an athlete from a lower-level program.

Still, Lance managed to throw for 28 touchdowns and zero interceptions with a completion percentage of 66.9. Sure, teams might prefer to see him do it against Alabama or Ohio State rather than Central Arkansas, so while there’s good reason Lance is a first-round prospect, there’s also good reason Lance is projected to be available when the Patriots pick.

Waddle had a pedestrian national championship game compared to teammate Devonta Smith, who ran wild over Ohio State with 12 receptions for 215 yards and three touchdowns.

But Waddle is an interesting prospect — an explosive, shifty after-the-catch runner who can turn short-yardage plays into big gains, according to scouts. NFL.com’s Daniel Jeremiah noted Waddle can also be a deep threat, comparing him to former Pro Bowler Santana Moss. As ESPN noted, the Patriots do need a quarterback, but Damiere Byrd was the team’s top target last season and any incoming QB could use some more reliable weapons.

Brugler extended his mock draft to the second round, where he picked Washington defensive lineman Levi Onwuzurike for New England. Onwuzurike recorded 45 total tackles for the Huskies last season as well as a pair of sacks. Scouts praise Onwuzurike’s power despite his 290-pound frame. 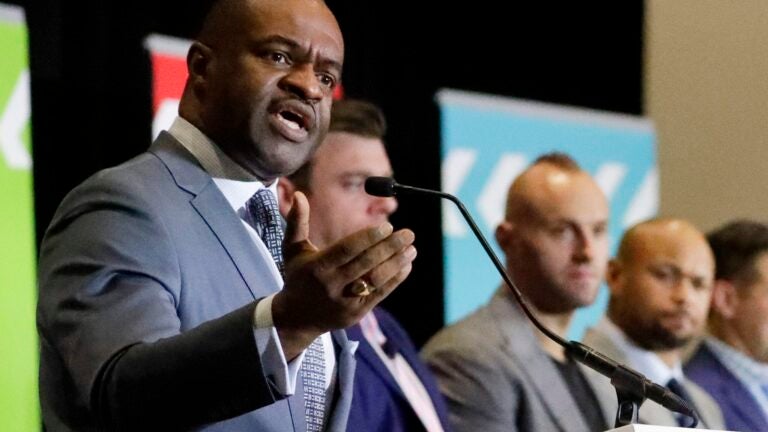