On Wednesday, the Bruins defeated the Rangers in overtime, 3-2. Brad Marchand scored the winner after some quality defensive work from Charlie McAvoy.

In other Boston sports news, the Red Sox announced the trade of Andrew Benintendi to the Royals as part of a three-team deal with the Mets also involved.

The Patriots and Deshaun Watson: One of the NFL’s most significant offseason storylines is quarterback Deshaun Watson revealing that he wants out of Houston.

Whether or not the 25-year-old can get a trade from the Texans, one former NFL general manager thinks it could work out nicely for the Patriots.

During a segment on ESPN’s “Get Up!”, Needham native Mike Tannenbaum — who was the Jets’ general manager from 2006-2012 — made an offseason forecast befitting the title of the show segment: “Bold predictions.”

“New England Patriots, going to get Deshaun Watson,” Tannebaum said to a wave of incredulous reactions from his colleagues. Part of his rationale, Tannenbaum explained, was the connection in the front offices.

“Nick Caserio just came from the Patriots, they know each other well,” Tannenbaum said of Caserio and Bill Belichick. “If I get Deshaun Watson — with all those other opt-outs coming back — I’m going to go to the Super Bowl. I’m gonna go beat the Kansas City Chiefs. Bill Belichick is a great competitor, he’ll do whatever it takes. We get Deshaun Watson, we’re back in the Super Bowl.”

Tannenbaum closed his prediction with an added bombshell: A Super Bowl matchup against Tom Brady and the Buccaneers.

“New England, Tampa Bay in the Super Bowl next year in L.A.,” he declared. “Talk about a can’t-miss game.”

Naturally, the declaration elicited a response.

“I can’t be expected to go on,” joked show host Mike Greenberg, a Jets fan. “If this is going to happen, twenty years I’ve been waiting for Brady to get out of the [AFC East], and now all of a sudden you’re telling me…if Deshaun Watson winds up in New England, I’m telling you right now, I’m done.”

Still, the odds are actually in favor of Greenberg’s Jets. Equipped with the second overall pick in the 2021 draft (along with a second first-round pick that was secured in a trade with the Seahawks), New York was recently listed as the favorite to land Watson.

The Patriots, despite Tannenbaum’s prediction, are listed as only the seventh most likely team to end up with the 2020 NFL passing yards leader.

Trivia: The last time the Patriots traded a first-round pick in a deal to acquire a current NFL player (and not just more draft picks) was 2017. What player did New England get in the trade?

Hint: He now plays for the Texans.

Tuukka Rask’s humorous (and harmless) but still kind of terrifying mixup: With less than a minute to go in the Bruins-Rangers matchup on Wednesday night, the score was tied 2-2.

Apparently, that was news to Bruins goaltender Tuukka Rask, who suddenly skated towards the Boston bench expecting to get an extra skater on the ice. His teammates and coaches desperately waved him back, and Rask could only laugh at his mistake.

🎥 Tuukka Rask speaks with the media after tonight’s win over the Rangers: “We hung in there…we played a pretty solid game.” pic.twitter.com/EvI5BYIFVb

Mikaela Shiffrin grabbed third in the world championships super-G: After not racing in the event for more than a year, three-time Olympic medalist Mikaela Shiffrin still managed to get on the podium in Thursday’s race.

The universal expectation heading into the fight was that Tyson, the undisputed heavyweight champion, would make quick work of Douglas.

Yet as Douglas survived the opening rounds, avoiding the early knockout that so many of Tyson’s competition had succumbed to, the Tokyo crowd (where the fight was hosted) began sensing that an upset was in the air.

Even after he was knocked down at the end of the eighth round, Douglas persisted. And in the 10th round, he landed the famous knockout.

Daily highlight: During a busy night, Tuukka Rask turned in one of the saves of the season. 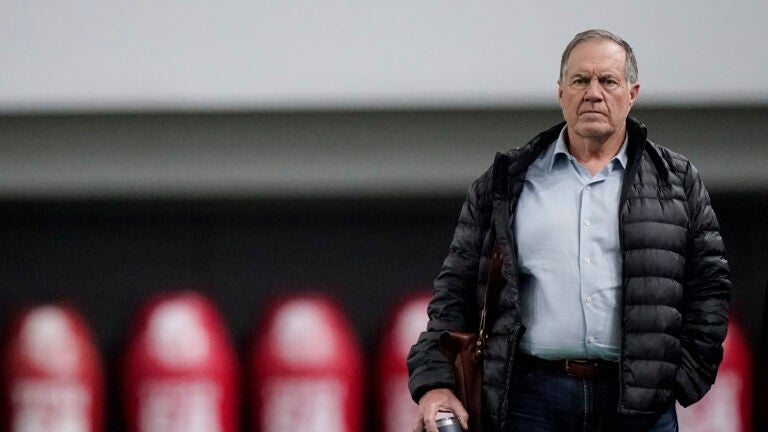 Bill Belichick bets on himself, and other early takeaways from Patriots free agency