My favorite theory regarding how the Patriots intend to fill their quarterback vacancy is the one involving an old friend with a new employer.

The theory: Nick Caserio, the longtime Patriots personnel executive who last month was named the general manager of the flame-engulfed zeppelin known as the Houston Texans, was going to be the conduit to help Bill Belichick acquire the quarterback to replace the quarterback who couldn’t replace Tom Brady.

No, not Deshaun Watson. As magnificent as the three-time Pro Bowl quarterback has been in his four years with the Texans – he’d have a case to go No. 2 overall in a hypothetical redrafting of the entire NFL, behind only Patrick Mahomes – he’s not going to be a Patriot.

The current state of their roster leaves them short of the assets to acquire him. Given part of the reason he wants out of Houston is that they keep giving clout to ex-Patriot front office personnel without consulting him, it’s unlikely that coming here would be on his list of desired destinations. And Caserio would be committing professional self-harm if he traded the Texans’ franchise player to his former boss a couple of months into his reign.

Forget Watson, as much fun as it might be to imagine him with the Patriots. My version of the Hook Us Up, Nick theory is that Belichick is hoping Caserio can play a role in the Patriots landing a more realistic (and familiar) option at quarterback:

Are you familiar with the collected works of Jimmy Garoppolo? I presume you are, but here’s a brief synopsis. Garoppolo was drafted by the Patriots in the second round of the 2014 NFL Draft. Belichick mentioned Brady’s age and contract status in explaining the pick. Brady handled the drafting of his successor with the fury of someone who was once drafted after Spergon Wynn and Giovanni Carmazzi. Garoppolo played well for a game-and-a-half during Brady’s ridiculous suspension in 2016, building his value. Brady outlasted the succession plan. Belichick gifted Garoppolo to the Niners for a second-round pick at the 2017 trading deadline. Garoppolo has played well for his new team – they’re 24-9 with him as their starter (and 7-19 without him),  reaching Super Bowl LIV. But he fell apart in the fourth quarter of that Super Bowl, and he’s been frequently injured, playing just six games last season. He has a $25 million cap figure next season, and while Niners general manager and 2008 Patriots preseason legend John Lynch said on the Eye Test for Two podcast that he has no doubt Garoppolo will be the Niners quarterback come September, he added the caveat, “if he is injury free.”

That sounds like an out to these ears, especially if a more durable – and superior – quarterback becomes available. That’s where the Caserio theory comes in. Watson wants out of Houston, like any sane player in Jack Easterby’s weird power-consolidating orbit would. Peter King reported that the Texans haven’t responded to offers so far, and there’s no urgency to now – trading him after June 1 would be a considerably smaller cap hit. The wisest thing would be to hold on to him, period, even if he threatens to sit out. But that would also require remarkable discipline, especially given the lucrative offers they are likely to receive. Or are already receiving.

It’s been reported that the Niners are one team that appeals to Watson. To me, there’s no doubt, despite Lynch’s support of his current quarterback, that Watson appeals to the Niners, because he should appeal to just about every team not located in Kansas City. King suggested in his column a seven-assets-for-Watson deal that the Niners could offer. Just a hunch, but I suspect his hypothetical is awfully similar to– if not exactly like — one of those offers the Texans haven’t responded to.

King had Garoppolo going to the Texans in that deal. Given his $25 million cap figure, I’m not sure that aspect makes sense; Caserio might be wiser to sign a cheaper placeholder free agent quarterback – hello, Ryan Fitzpatrick — while demanding another bushel of picks from the Niners rather than a quarterback.

So how does all of this help the Patriots? Well, it doesn’t, if Caserio takes Garoppolo in a deal with the Niners and keeps him. But if he doesn’t take him, the Niners could either trade him to the Patriots, or more likely, cut him, freeing him up to come back here, as Brady’s successor after all, one year removed.

The main flaw in this theory is the incongruence of the timing required to make it happen. The Texans would be wise to wait until after June 1 to trade Watson, while the Patriots can’t afford to wait much longer. NFL free agency begins March 17. The Patriots need significant upgrades at the offensive skill positions, and there is plenty of high-end talent that will be available. But as Hunter Henry, a pending free agent whom Belichick has followed since the Chargers tight end was in high school, noted this week, a team’s quarterback situation will be a major factor in deciding where he plays. If the Patriots don’t have their quarterback situation figured out soon, that is going to limit the pool of pass-catchers willing to come here.

One more conjectured theory for you. I believe these to be Belichick’s preferred order of potential plans to find a quarterback.

1) Wait until right up until free agency to see if anything changes with Garoppolo, while trying to get candid intel from Caserio about the possibility of trading Watson to the Niners.

2) Acquiring Marcus Mariota from the Raiders and drafting a quarterback in the second or third round in April.

3) Tracking down Michael Bishop and giving him the shot so many Patriots fans thought he deserved in 1999. You know who you are. 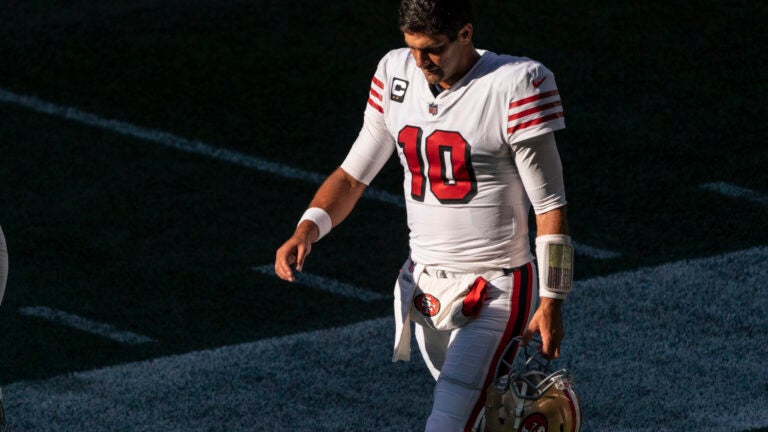