Faced with the possibility of losing guard Joe Thuney in free agency, the New England Patriots brought back a familiar face to solidify their offensive line going into the 2021 season.

The Patriots will reportedly bring back one-time tackle Trent Brown via a trade with the Las Vegas Raiders, sending over a 2022 fifth-round pick in exchange for Brown and a 2022 seventh-rounder. Brown also restructured his contract into a one-year deal worth $11 million, meaning he would be a free agent again after this season. The trade will become official when the new league year begins on March 17.

A former 2015 seventh-round pick first came to New England in an offseason trade with the San Francisco 49ers, the team that originally drafted him. Brown went on to start all 16 games at left tackle for the eventual Super Bowl-winning Patriots before earning a monster four-year, $66 million contract with the then-Oakland Raiders, making him the highest-paid offensive lineman in the league at the time.

Since then, Brown has struggled with injuries, playing in just 16 games the last two seasons. But when healthy, even his former team believes the massive (6-foot-8, 359 pounds) but athletic tackle can still be among the NFL’s best.

“Trent’s whole thing is when he’s healthy, in shape and ready to go, he’s as dominant as any tackle in football and he proved that early in the 2019 season. Since then, it’s kind of been a roller coaster,” Raiders general manager Mike Mayock said to ESPN last week.

“If Trent gets in shape and stays committed, there’s not a better talent out there.”

For what it’s worth, Brown seems pleased to be heading back to Foxborough, even posting some throwback pictures of himself from his first stint in New England.

On the other hand, the move also means the door looks all but closed on bringing back Thuney, who’s in line for a major payday after five years as a top-flight guard with the Patriots.

According to NFL insider Albert Breer, the Patriots have not made significant efforts to re-sign Thuney after placing the $14.7 million franchise tag on him last year — a solid indication they’ve been preparing to move on.

The Patriots have had very minimal conversation and have made no progress with OG Joe Thuney on a new deal since franchising him last March, I’m told. The Trent Brown trade is another step towards Thuney hitting the market.

With Brandon Scherff tagged, Thuney is in a great spot.

To that end, Brown’s presence gives New England options as they work through how best to replace Thuney at left guard. His ability to play either tackle spot allows the Patriots to evaluate moving left tackle Isaiah Wynn inside to guard or shifting second-year swing lineman Michael Onwenu, who many believe is best suited to play inside, to that spot.

Either way, adding Brown might also spell the end of right tackle Marcus Cannon’s tenure with the team as the Patriots might prefer to pocket the roughly $6.3 million they’d save by cutting Cannon and play either Brown or Onwenu in his place. Cannon, a survivor of non-Hodgkins lymphoma, opted out of the 2020 season due to COVID-19 concerns.

If the team then re-signs center David Andrews in free agency, the 2021 Patriots offensive line would stand a solid chance of reproducing its solid 2020 performance, which landed it fourth on Pro Football Focus’s list of best offensive lines.

The loss of Thuney will hurt, but the Patriots will take the trade-off if Brown can return to form this season. 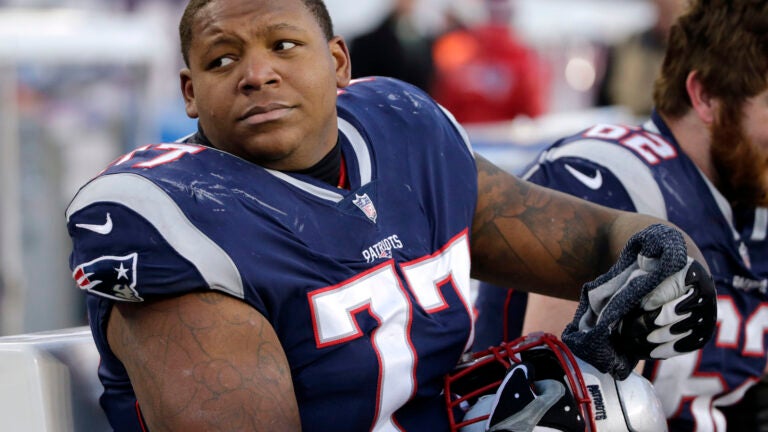 Morning sports update: Here’s how Trent Brown reacted to reportedly being traded back to the Patriots