The New England Patriots’ need at quarterback heading into the 2021 NFL season is no secret, nor is their aggressive scouting of this year’s top quarterback prospects in the NFL draft.

Two of those signal-callers — Clemson’s Trevor Lawrence and BYU’s Zach Wilson — are likely well out of the Patriots’ range even if they move up from their No. 15 overall slot.

But NFL.com expert Daniel Jeremiah says one quarterback that could fall into striking distance could especially pique New England’s interest.

“I could see Bill Belichick having an affinity and a lot of fun with a guy like Trey Lance,” Jeremiah said on a video conference call with reporters Tuesday.

Jeremiah is the latest NFL analyst to predict the Patriots could take a run at Lance, with multiple pundits already mocking the 6-foot-4, 226-pound signal-caller to New England this offseason.

He says Lance has similar size, speed, and running ability to a younger Cam Newton with more developed passing ability than Newton did coming out of the draft. But Jeremiah also notes Lance possesses intangible traits the Patriots would love.

“This kid is incredibly intelligent,” Jeremiah said, “which we know the Patriots have always placed a premium on. He can direct fronts, he can do all the stuff at the line of scrimmage you need to do…He’s got a power arm that fits in the weather in that division later in the year. He can play through that. Gosh, this guy has been up in the Dakotas, grew up in Minnesota, so the weather thing would be — he’d be very comfortable there.”

Lance’s 2019 season at North Dakota State put him on the map as he threw for 2,786 yards, 28 touchdowns, and no interceptions while completing nearly 67 percent of his passes. It’s also his only full season as a starter; he played just one game in last year’s COVID-shortened season.

That lack of experience combined with the lesser competition level in the FCS has not dampened his hype as a first-round prospect, but expecting him to make an immediate splash in the NFL might be unreasonable, explains Jeremiah.

“Trey is going to need some time,” he said. “The only thing that would hold me back on that is I don’t know if he’s going to be ready to do that right away.”

For the sake of comparisons, Jeremiah offered late Tennessee Oilers/Titans great Steve McNair: “I was around McNair late in his career with the Ravens and just the physicality that he plays with, the toughness — he’s got a little room to grow in terms of just pure accuracy.”

Like many analysts in recent weeks, Jeremiah believes the Patriots may have to trade up in the draft to get Lance with quarterback-needy teams like the Carolina Panthers, at No. 8 overall, sitting ahead of them in the draft. But he also says the possibility of teams finding quarterbacks via free agency or trade could alter the way the top 10 shakes out.

“It just takes one or two of these teams to find other options,” Jeremiah explained, “and then the Patriots wouldn’t have to go up quite as far.”

In a previous mock draft, he also has suggested the Patriots look to South Carolina cornerback Jaycee Horn as a replacement for Stephon Gilmore should they stay at No. 15 and miss out on the top quarterbacks.

Visit The pandemic caused financial stress for many. Here's what readers say. 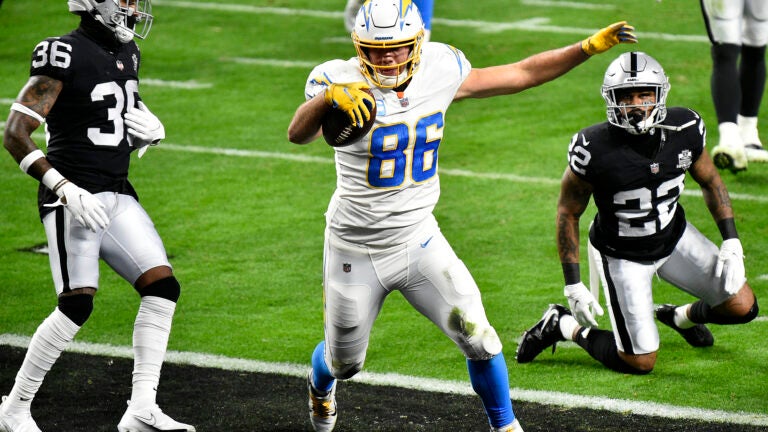