In January, before the Tampa Bay Buccaneers faced the New Orleans Saints in the NFC divisional round, Tom Brady was asked about Saints quarterback Drew Brees — another aging quarterback enjoying an excellent season.

At the time, Brady seemed a little indignant at the idea that Brees was his contemporary. After all, Brady is more than a year older.

“He’s a lot younger than me — he’s 18 months younger than me,” Brady said. “Eighteen months ago I felt pretty good, so I’ve got a little advanced age on him and experience,” Brady told reporters via Zoom. “I’m hanging in there. He’s had a terrific year. He’s a great player — I’ve known him for a long time. I’ve always had a great amount of respect for him going all the way back to his Purdue days. …

On Sunday, Brees — 42 — announced his retirement from the NFL via an Instagram video featuring his kids. In it, the four children take turns announcing his retirement, before shouting at the end that now Brees “can spend more time with us! Yay!”

“Til the very end, I exhausted myself to give everything I had to the Saints organization, my team, and the great city of New Orleans,” Brees wrote in his post. “We shared some amazing moments together, many of which are emblazoned in our hearts and minds and will forever be a part of us. You have molded me, strengthened me, inspired me, and given me a lifetime of memories. My goal for the last 15 years was striving to give to you everything you had given to me and more.

“I am only retiring from playing football, I am not retiring from New Orleans. This is not goodbye, rather a new beginning. Now my real life‘s work begins!”

Brady, who turns 44 in August and has made it clear he does not intend to retire any time soon, congratulated Brees — the NFL’s leader in career completions and yards passing.

Congrats my friend on an incredible career. Thank you for the inspiration and dedication on and off the field! Look forward to seeing what’s next @drewbrees https://t.co/2rDMn78OQD

After Brady and the Buccaneers eliminated Brees and the Saints in January, the two quarterbacks shared a moment on the field. Brady embraced Brees, threw a touchdown pass for his kids, and chatted with Brees and his wife.

“I think so much of him as a player, person, everything,” Brady told Fox Sports’ Erin Andrews. “I know him pretty well, and he’s an incredible player and competition.” 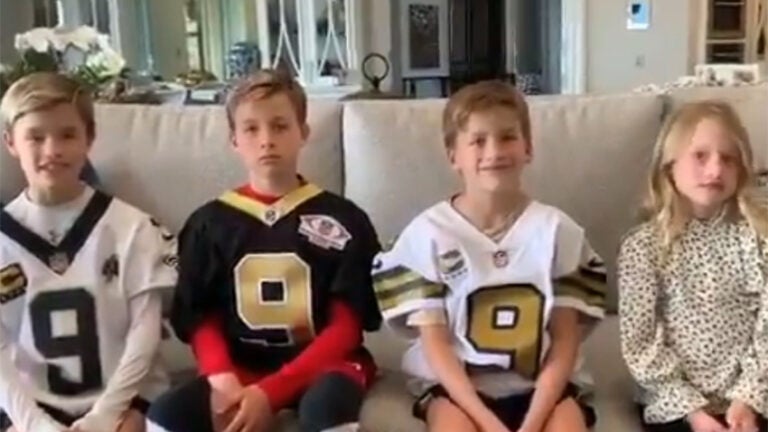