After his offense struggled to produce big passing plays last year, New England Patriots head coach Bill Belichick decided to bring in one of the best deep threats money could buy this offseason.

The Patriots reportedly will sign former Las Vegas Raiders and Philadelphia Eagles wide receiver Nelson Agholor to a two-year, $26 million contract as the team revamps its passing attack. Agholor had a resurgent 2020 after a rough end to his Eagles tenure and also brings some past experience with Belichick and the Patriots to the table.

Here are five things to know about the Patriots’ speedy new receiver.

After Agholor put up a stellar NFL Combine, the Philadelphia Eagles selected the USC receiver with the 20th overall pick in the 2015 draft.

His first two seasons didn’t do much to endear him to fans as he only recorded 59 catches for 648 yards in 2015 and 2016. But he started coming into his own during the 2017 season, which coincided with the Eagles’ championship run.

He tore up the Patriots in the 2018 Super Bowl.

Bill Belichick seems to have a thing for recruiting players who have had success against him in the past. Now, you can add Agholor and former Eagles teammate Jalen Mills to that category.

Agholor caught nine passes for 84 yards in the Philadelphia Eagles’ stunning Super Bowl victory over the Patriots in 2018.

He got epically roasted by an Eagles fan a few years ago.

Fame can be a fickle thing.

Mere months after Agholor’s big-time Super Bowl performance, he was mired in a dismal 2019 season — his worst statistical year since his sophomore season.

His struggles with drops especially irked Philly fans; he let four passes hit the turf that year after dropping three balls the year before.

That led one local fan to hilariously flame Agholor while recounting the events of an actual fire.

To add insult to injury, the Eagles let Agholor walk in free agency after the 2019 season.

He’s coming off his best season.

But he turned things around quickly for Agholor after signing a veteran minimum contract with the Las Vegas Raiders in 2020. He posted a career-high in receiving yards (896) and matched his previous past mark of eight receiving touchdowns from 2017.

Agholor was particularly effective as a deep threat, putting up 444 yards on passes more than 20 yards down the field (sixth in the NFL) and scoring more times on such throws (six touchdowns) than any receiver except Kansas City Chiefs speed demon Tyreek Hill.

Agholor moved with his family to the United States from Lagos, Nigeria when he was five years old.

His middle name, Efamehule, means, “May my name never be forgotten.” 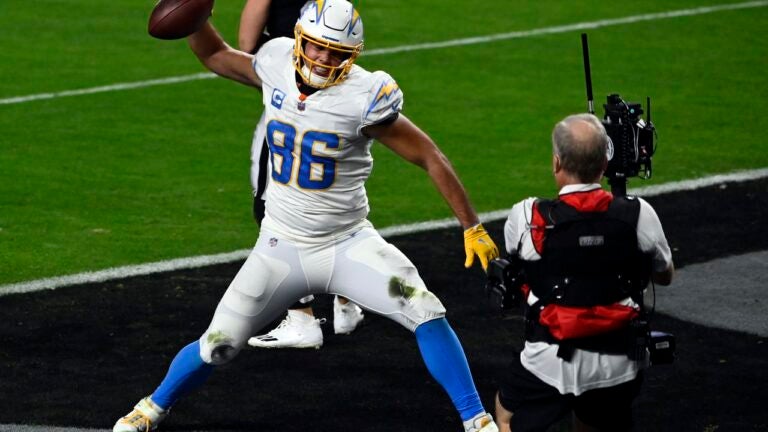