This past week has contained a healthy amount of scrutiny for Bill Belichick and the New England Patriots as they rampaged through free agency in an attempt to rebound from a disappointing 2020 season.

First came the controversial re-signing of veteran quarterback Cam Newton, who struggled for much of last season and whose return has not exactly been embraced by the Patriots’ fan base.

Then, Belichick rampaged through free agency with a historic spending spree, shelling out big money to tight ends Hunter Henry and Jonnu Smith, Pro Bowl pass-rusher Matthew Judon, and others in a move some say feels like desperation.

But the Patriots have at least one believer in ESPN NFL analyst Domonique Foxworth, who offered a more positive outlook on New England’s 2021 prospects on Bomani Jones’s podcast “The Right Time.”

“They’re going to make a run at taking [the division] back this year,” said the former NFL defensive back, who played six seasons with the Denver Broncos, Atlanta Falcons, and Baltimore Ravens.

Foxworth pushed back on the “desperation” narrative following the Patriots but seemed to agree with Jones’s assertion that New England was among the NFL’s least talented teams last year.

“They performed well above what their record should’ve been considering how bereft of talent that team was. They had a lot of holes to fill,” he said.

Foxworth went on to say that the Patriots’ offseason plan received a “stroke of luck” as the team’s cap savings became even more valuable due to the salary cut crunches caused by the COVID-19 pandemic.

“[Belichick] was like the one-eyed man in the land of the blind,” he quipped. “He’s spending crazy, but he’s not making any long-term commitments. I don’t think it’s as wild or desperate as people are making it seem.”

The former defensive back pointed to the additions of Henry and Smith as perhaps the biggest moves of the Patriots’ offseason, pointing to the versatility they can bring to the two-tight end system the team likely hopes to employ in 2021. Foxworth also specifically mentioned how dangerous that system can be with quarterback Cam Newton, who also re-signed with New England this week, under center.

Foxworth also spoke specifically about Newton’s stellar reputation in the Patriots’ locker room, saying Belichick, the coaching staff, and his teammates’ positive comments about the veteran quarterback run counter to past narratives surrounding him.

“I feel like ‘coach’s pet’ has a negative connotation, but Cam Newton is the ideal guy,” he added. “He’s a true football guy who reacts and behaves and speaks the way football guys like. And I’m not shocked he was such a hit in that locker room and such a hit with Coach Belichick.”

Foxworth went on to explain that Newton’s ability to command respect with a new time at this point in his career compares, though lesser in degree, to what Tom Brady accomplished last year after leaving New England for the Tampa Bay Buccaneers.

“I thought it’d be a little bit tougher [for Brady in Tampa Bay], a few more growing pains. But I forget that those players have had a relationship with Tom Brady that goes 20 years. It’s just been one way,” he said. “The same is true of Cam Newton. Those guys he’s playing with have known of Cam Newton and had a relationship with him for a long time, so it makes it easier to clear that fence and build that trust.” 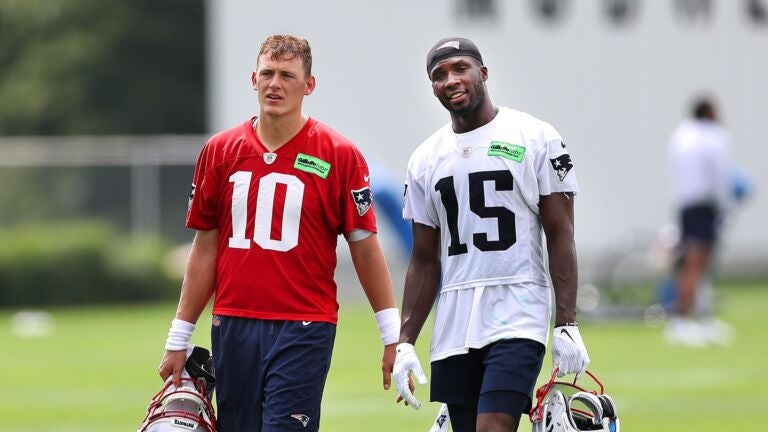 ‘A very competitive position’: Bill Belichick assesses the state of the receiver room