Jalen Mills, the newest member of the New England Patriots’ defensive backfield, says he’s been following Patriots head coach Bill Belichick’s career since before he was even seriously invested in football.

But he had never met Belichick until his first visit to Gillette Stadium.

“I’m about to walk out of the cafeteria and I hear, ‘Hey Jalen,'” Mills recounts. “So I turn around and it’s Coach [Belichick].”

For a moment or two of conversation, Mills says the reality of who he was talking to finally set in.

Belichick’s response: “He didn’t even flinch…like he was used to it. Like he was a rock star.”

Mills talked about his conversation with Belichick and the free-agent process that led him to New England in his introductory press conference with reporters on Monday.

The defensive back comes to Foxborough after spending his first five seasons with the Philadelphia Eagles, who took him in the seventh round of the 2016 draft. He spent much of his time there starting at cornerback but switched to strong safety last year, something that appeals to his new coach.

“That was actually one of the things he said, that he loved my versatility. He loved the fact that I could play multiple positions,” Mills explained, also pointing to recently retired Patriots defensive back Patrick Chung as another jack-of-all-trades defender he has studied and “has a lot of respect for.”

He said he does not yet know where the Patriots plan to play him, but he’s embracing the possibility of changing positions frequently.

Mills is also the second former Eagle to join the Patriots this offseason along with wide receiver Nelson Agholor, whom Mills lined up across from in practice for his first four seasons before Agholor departed for the Oakland Raiders last year.

“Me and Nelson, man, we had some battles…to where we were going at it with each other. But at the end of the day, that’s what you want,” said Mills.

“One day, I get him. The next day, he gets me. And it goes on and on to the point where, you know that saying, ‘Iron sharpens iron.’ That’s what you want because at the end of the day, it’s all about having that guy in front of you getting you ready to then perform at a high level on Sunday.”

Mills and Agholor were part of the Eagles team that upset the Patriots in the 2018 Super Bowl. For Mills’s part, he says he hopes to keep one piece of his time in Philadelphia with him: his green hair.

“That’s the plan, keep the green hair,” he says, noting he ran the hairstyle by Belichick as well. “I had a guy say he was a fan of the Eagles for like 30 years. Now he’s saying he’s going to be a fan of the Pats just for the simple fact that I’m coming here. So I think at this point, I think I gotta keep the green.”

But even though he’ll carry that part of his Eagles past with him, Mills says he’s “beyond excited” to be a Patriot.

“There was just so much happening so fast,” he said of the hectic free-agent process. “[My agent] was just like, ‘Jay, whatever decision you make, whatever team you want to play for, it’s on you…I stepped forward and told him that I wanted to go play for the Patriots.” 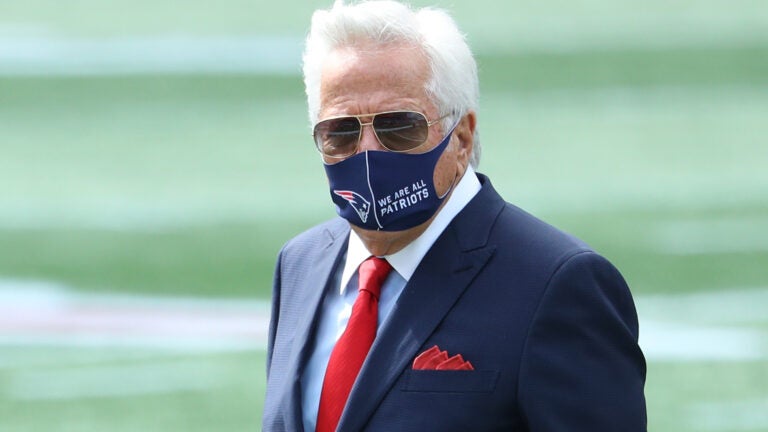