Wide receiver Kendrick Bourne spoke to reporters as a Patriots player for the first time on Monday. The 25-year-old signed a three-year contract amid a flurry of New England free agent additions.

A theme from his introductory press conference was an optimistic view of both his situation and the Patriots’ future following a 7-9 season.

“I know they’re going to develop me into a better player,” Bourne explained. “It was just dope to be picked in those chosen few free agents.”

Coming from the 49ers, Bourne said he spoke with former Patriots receiver Wes Welker (now a San Francisco coach) before signing. Welker, according to Bourne, told him that he would have to prove himself.

“Everything is earned,” Bourne said of Welker’s description. “That was the biggest thing. When I heard that, coming to a place where you could earn everything, go out there and play and showcase and earn your keep, it was a no-brainer. He had a lot of stories, lot of winning stories, lot of good times there.”

Bourne entered the NFL as an undrafted free agent out of Eastern Washington in 2017.

As a free agent, he was unsure of where he might end up. When the Patriots called, Bourne said he felt “special.”

“They could’ve went and got anybody, there’s so much talent out here,” said Bourne. “I’m just grateful for the opportunity. They’ve seen something in me, they’ve seen me fit well somewhere and they want to use me. So my job is come in and do exactly what they want me to do. I know they’ll put me in a position to be successful, so it’s my job to know the playbook, know the ins and outs of the organization, and I all that kind of stuff, so I can be successful and be a reason why they gave me this money.”

As far as acclimating, Bourne is aware that New England can be a tough atmosphere.

“They told me that practices are hard,” Bourne said of what he’d heard. “You’re going to get tested every day with the playbook, stuff like that. They’re going to give you different looks, different types of things that you need to see.”

“Bill told us a story about Randy Moss, how he came in and all he did was focus the playbook,” Bourne noted. “Simple as that. And he had his best year [in New England in 2007]. So that’s what I’m going to focus on. If I can go out there comfortable, knowing exactly what I need to do, I know I will be successful. I believe in my game that much, so I think it’s going to be an awesome year.”

Coming to New England in 2021 means that, for the first time since training camp in 2009, Bourne won’t be joining a Patriots team that made the playoffs the previous season.

In his early estimations, Bourne thinks the Patriots will immediately be back in contention.

“They’re going to turn it around in one year,” Bourne predicted. “I can honestly see it. First day in the building I can feel how natural our connection was between the players. First time meeting each other it was just natural energy, positive energy, so I feel like it’s going to be an awesome year. I can’t wait.”

Asked about the Patriots’ culture, or his perception of the organization’s mentality and culture, Bourne admitted he thought it was different than what he’s seen to this point.

“I had a whole misconception about the whole place, thinking it was too serious or whatever it may be, and it just wasn’t,” said Bourne. “It was awesome to get a call from a place like that. I know it was the best decision for me. Like organization wise, they’re going to be set up, they’re going to win again.

“That was just a one-year thing, I feel like,” Bourne said in reference to the non-playoff season a year ago. “I knew I wanted to be a part of the new era, whatever you want to call it. I don’t know. But just to be picked with a great group of guys by a great organization it just shows me my potential. I don’t put a ceiling on myself. I feel like I can prevail more in this offense. I don’t even know, we’ll just see.”

As far as Cam Newton — who Bourne said invited him to work out in Atlanta — Bourne said he thinks the former NFL MVP is pointed to have an “awesome year.”

“He called me, congratulated me after I signed,” Bourne recalled. “It was awesome talking to him. I told him I’ve been a fan of him for a long time. His work ethic, that’s a main thing that stands out to me.

“I think he’s going to ball out, with the weapons they brought in, the help now,” Bourne added of Newton. “It was just one of those rebuilding years that they went through, and he was a part of it, so people may say he doesn’t look that good, or he looked bad, whatever it may be, but now he has some help and they know what they’re putting around him.” 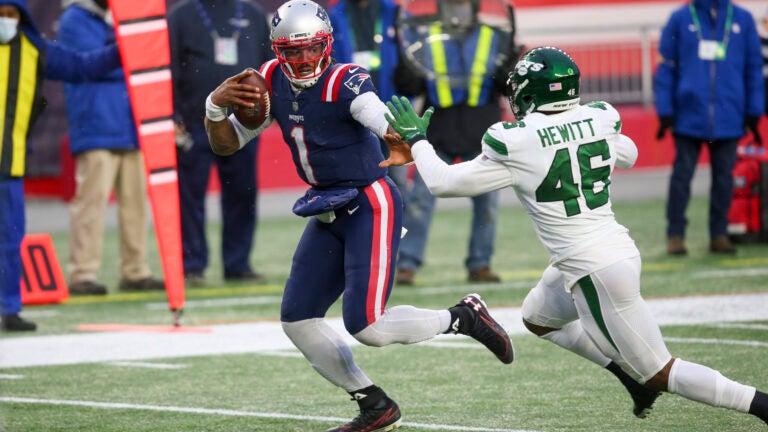