The Celtics got back in the win column on Sunday, defeating the Magic 112-96. Boston will play again today, facing the Grizzlies at 9 p.m.

Among Sunday’s highlights was Jaylen Brown hitting a new career best for 3s in a game, with 10:

The NCAA announced the Division I men’s hockey championship bracket. Boston College, Boston University, and UMass are all included.

And the Bruins will be back in action on Thursday, facing the Islanders at 7 p.m.

Elsewhere, Revolution center back Henry Kessler started in a 4-0 win for the U.S. men’s U-23 team over the Dominican Republic in an Olympic qualifier on Sunday.

The lead: After as busy a week in free agency as the Patriots have ever had, Robert Kraft spoke with longtime NFL insider Peter King about the state of the team.

“We had the second or third-most cap room at the start of free agency,” Kraft told King. “This year, instead of having 10 or 12 teams competing for most of the top players, there were only two or three. And in my 27 years as owner, I’ve never had to come up with so much capital before.”

As King pointed out, Kraft’s Patriots committed almost the same amount of money in guaranteed contracts to free agents in the last week as the longtime owner did when he bought the team in 1994 ($175 million).

“It’s like investing in the stock market,” Kraft explained. “You take advantage of corrections and inefficiencies in the market when you can, and that’s what we did here. We’ll see. Nothing is guaranteed, and I’m very cognizant of that. But we’re not in the business to be in business. We’re in this business to win.”

Whether or not the Patriots’ moves in free agency work out remains to be seen. The offseason is also far from finished, with the draft still to come in April.

One notable quote from Kraft came in a moment of self-reflection, as he acknowledged how times have changed for the Patriots.

“I do remember we always made fun of the teams that spent a lot in the offseason,” Kraft added. “So we know nothing is guaranteed, and I’m very cognizant of that.”

Trivia: Before Robert Kraft owned the Patriots, the team had played exactly one home playoff game. It happened on Dec. 31, 1978, and the Patriots lost 31-14. What team did New England lose to that day?

Hint: The team was built around a Hall of Fame running back, and coached by Bum Phillips.

American right back Sergino Dest scored for Barcelona on an assist from Lionel Messi: Dest would score a second and Barcelona cruised to an easy 6-1 win on Sunday over Real Sociedad.

From the weekend: England’s Chris Jordan made a phenomenal catch in the T20 final in what was ultimately a defeat to India.

If you blinked & missed this 🤯 catch – check it out again because it was SPECTACULAR!

Rate this catch by Jordan and Roy on a scale of 🔟.#INDvENG pic.twitter.com/BZZdB354rO

On this day: In 1972, the Red Sox and Yankees made a rare trade. Boston sent relief pitcher Sparky Lyle to New York in exchange for Danny Cater and a player to be named later (who ended up being utility infielder Mario Guerrero).

The deal probed to be a disaster for the Red Sox, as Cater made no impact in his three seasons with Boston. Lyle, on the other hand, posted a dominant 2.41 ERA in seven seasons with New York, winning the 1977 Cy Young Award as the Yankees won the World Series.

In immediate reactions to the trade, Boston left-hander Bill Lee was not a fan.

“It’s dumb,” Lee told Boston Globe reporter Peter Gammons of the trade. “That’s what it is.” 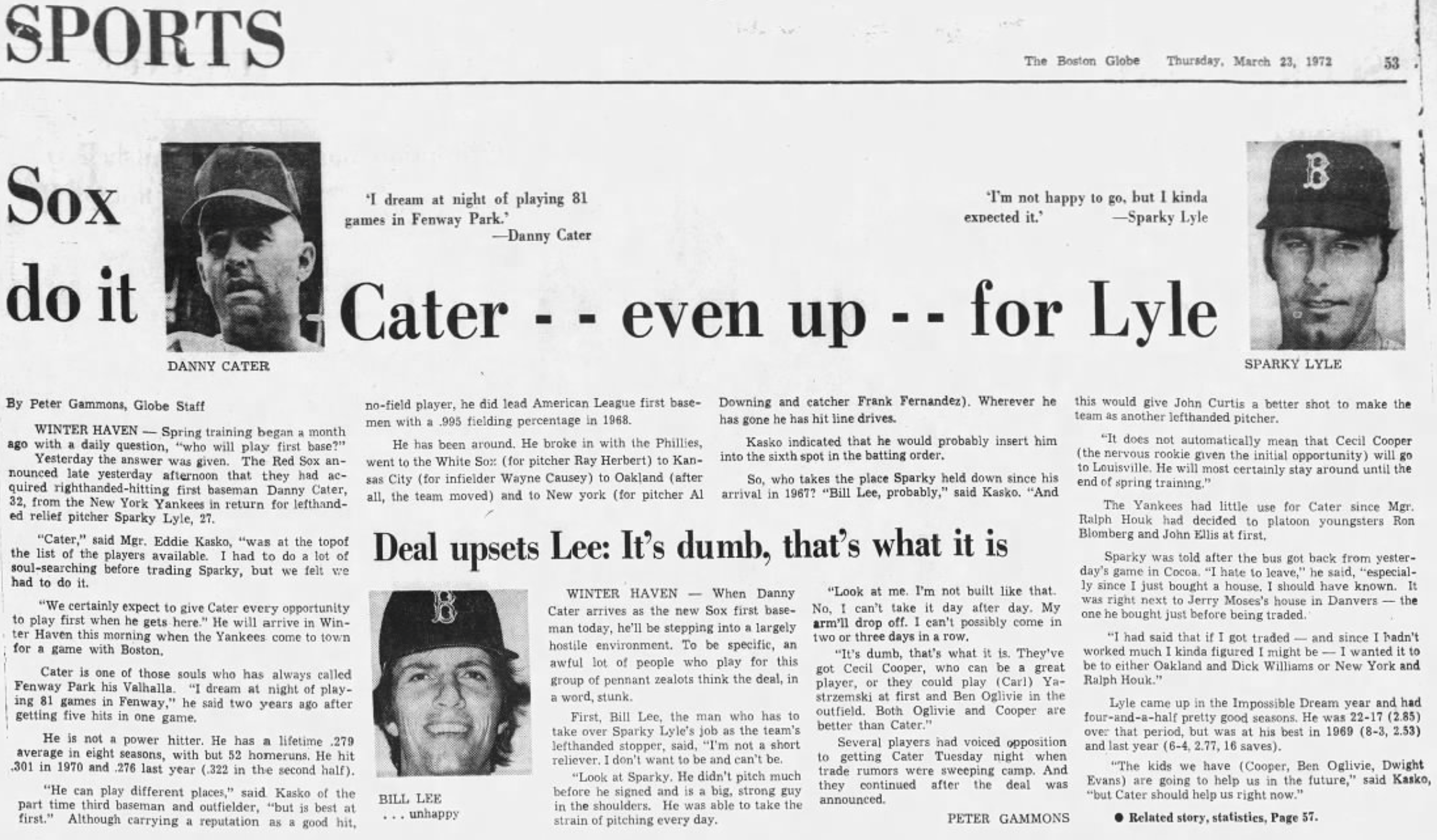 Daily highlight: From Saturday, Sevilla goalkeeper Yassine Bounou scored an extremely unlikely tying goal after a series of highly improbable events led to him standing in front of Valladolid’s goal with the ball at his feet. He finished with aplomb.

A GOAL FROM THE GOALKEEPER!! 🤩

A wild finish as Sevilla snatch a point with Bono going up and scoring this last-second equalizer! #RealValladolidSevilla pic.twitter.com/jiLc6OU4Et