Arguably no free-agent signings this offseason have changed the New England Patriots’ outlook next year more than the dual additions of tight ends Hunter Henry and Jonnu Smith.

For one thing, their signings simply add more weapons to an offense that badly missed them last season and lacked production from their tight end position in particular.

It also gives the Patriots an opportunity to rebuild their famed two-tight end offensive system around the two young pass-catchers. While neither of these players commands the respect of future Hall-of-Famer Rob Gronkowski, using their versatile skill sets in creative ways could allow the offense to thrive even without an elite wide receiver on the roster (yet).

What might such a two-headed tight-end monster look like in the hands of offensive coordinator Josh McDaniels, you ask?

Studying film from the Patriots’ two-tight end systems of the past can give us an idea of what’s in store.

Just before the tandem of Rob Gronkowski and Aaron Hernandez blasted through the league en route to leading the Patriots to a league-best offense in 2012, NFL.com expert Bucky Brooks wrote a primer detailing why the two-tight end system, specifically “12” (one running back, two tight end) personnel, would soon take over the league.

Of course, he cited the challenges that offense presents to opposing defenses in the passing game, especially with two versatile tight ends capable of winning matchups with safeties and linebackers. But Brooks also pointed out that “12” personnel holds another advantage for the offense: evening out the numbers game on run plays.

“Defenses routinely drop an extra defender into the box to fill the eight gaps along the front line,” he explained. “Against two-back formations, the addition of an extra defender gives the defense a numerical advantage at the point of attack, ensuring a free defender to the ball.

“However, the deployment of multiple tight ends along the line of scrimmage nullifies that advantage and creates big-play opportunities in the run game.”

The Patriots didn’t use “12” personnel often in 2020 (only playing 23 snaps in any multi-tight end formation), preferring to rely on a fullback in the run game over a second tight end. But even in a limited sample, they showed how two-tight end sets can be used creatively to open up big running plays.

In this Week 1 play from last season, New England runs a “power veer” read-option out of an “unbalanced formation,” lining up both tight ends to the right and forcing the Dolphins to roll defenders to the strong side to avoid being overmatched at the point of attack. On the offense’s first possession, McDaniels called a similar play where Newton kept the ball for a five-yard run — a key point for the outcome of this play. 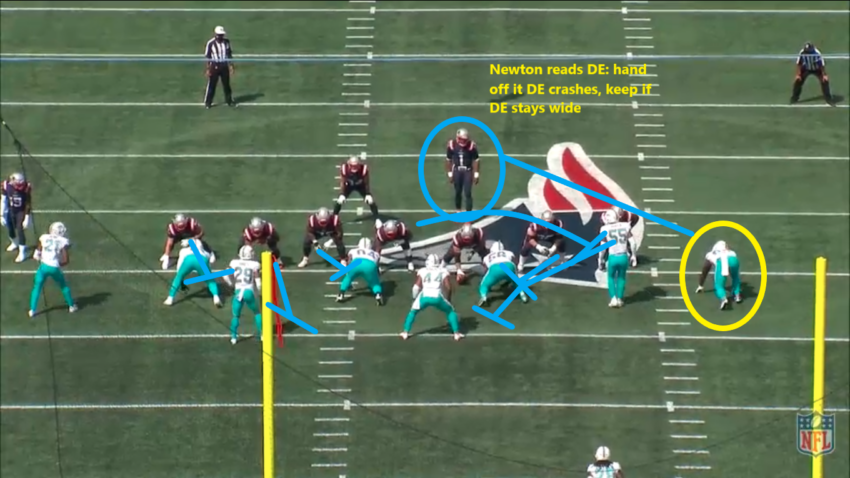 The Patriots then run to the weak side, pulling the backside guard Shaq Mason to block now-Patriots linebacker Kyle Van Noy and counting on rookie tight end Devin Asiasi to seal off one of the second-level linebackers. The offense accounts for the extra edge defender, Shaq Lawson, by leaving him unblocked and making him the “read” key on the option. If Lawson waits for Rex Burkhead to get the handoff, Newton follows Mason through the running lane. If Lawson crashes on Newton, the quarterback gives to Burkhead.

Lawson lingers on Newton, who had established himself as a runner early in the game, and Burkhead gets an easy 15-yard gain. 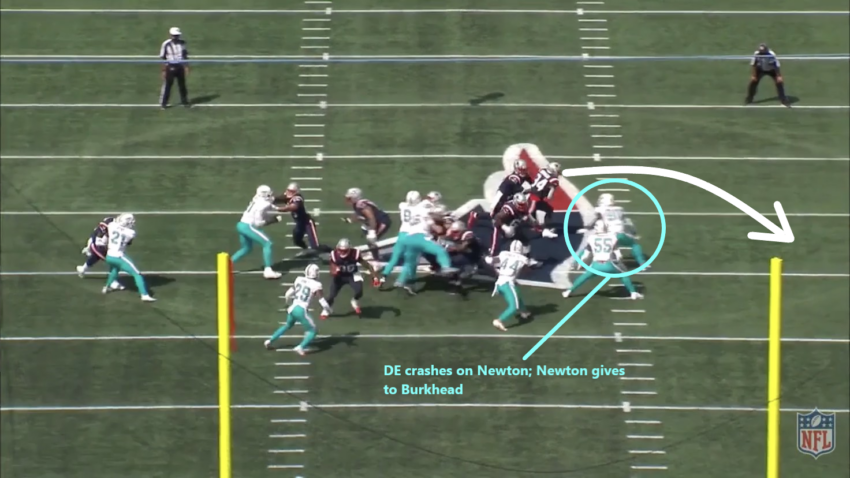 While neither Smith nor Henry is seen as an elite blocker, their ability to be serviceable in the run game, whether sealing the edge or occupying linebackers at the second level, would go a long way toward keeping defenses off-balance.

Of course, the Patriots’ primary objective with their two tight ends is to open up the passing attack for Cam Newton — or any other quarterback the team signs in the future. Both Henry and Smith are capable receivers: Henry’s career numbers are better, but Smith is more dangerous after the catch.

On top of that, both are used to being deployed in various positions, whether as a more traditional “in-line” tight end, “flexed” out as a receiver, or as a movable chess piece that can even play in the backfield (which Smith has done).

Jonnu Smith takes the handoff for the TD! #Titans take a 17-10 lead.

New England was obviously at its most deadly with the combination of Gronkowski and Aaron Hernandez in the early 2010s, but they’ve been able to effectively use dual tight end sets since then with other options as well.

In the following play from a 2017 game against the Denver Broncos, the Patriots use their “12” personnel in a familiar way: with one tight end, Dwayne Allen, playing “in-line” on the formation’s right side and the other, Gronkowski, “flexed” out as an inside slot receiver to the left. 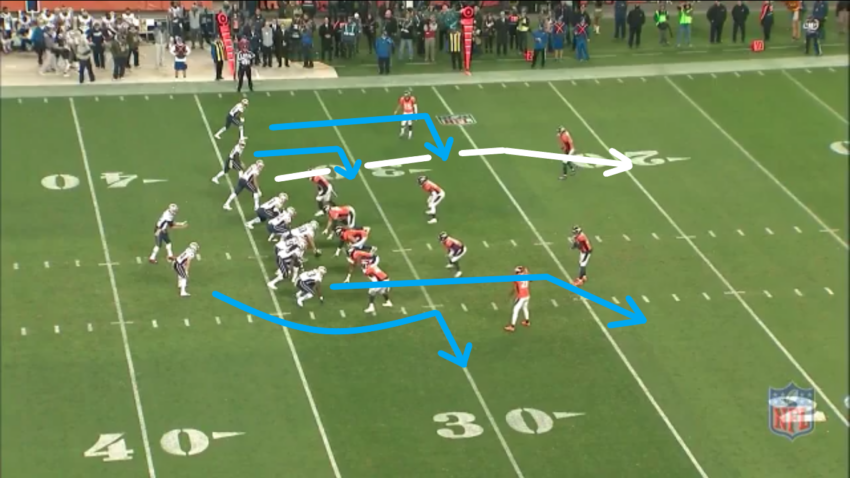 Here, the two tight ends attack the Broncos’ Cover-4 defense to create an opening for Gronkowski.

The Patriots’ 3×1 (“trips” to one side, one receiver opposite) causes the Broncos to adjust from normal
“quarters” defense, with cornerback Aqib Talib signaling pre-snap to the wide-side strong safety to cut off tight end Dwayne Allen’s route while Talib drops back to cover the deep middle.

The safety steps up to take Allen’s corner route, leaving the middle of the field vulnerable while Talib sprints back to cover the safety’s vertical responsibility.

Meanwhile, Gronkowski runs a skinny post that catches safety Justin Simmons too far from the hash marks on the “trips” side. With no deep safety to support and Talib arriving too late, Tom Brady and Gronkowski connect for an easy 22-yard gain. 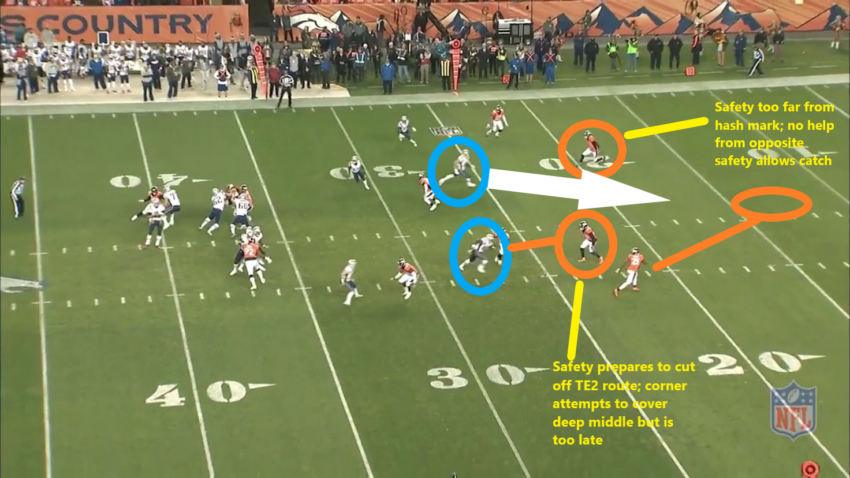 Two plays later, the Patriots go back to the same 3×1 formation in the red zone and run a very similar play to ice the drive with a touchdown. This time, they’re able to take advantage of Denver’s own adjustments thanks to their tight ends creating mismatch problems with the Broncos’ linebackers. 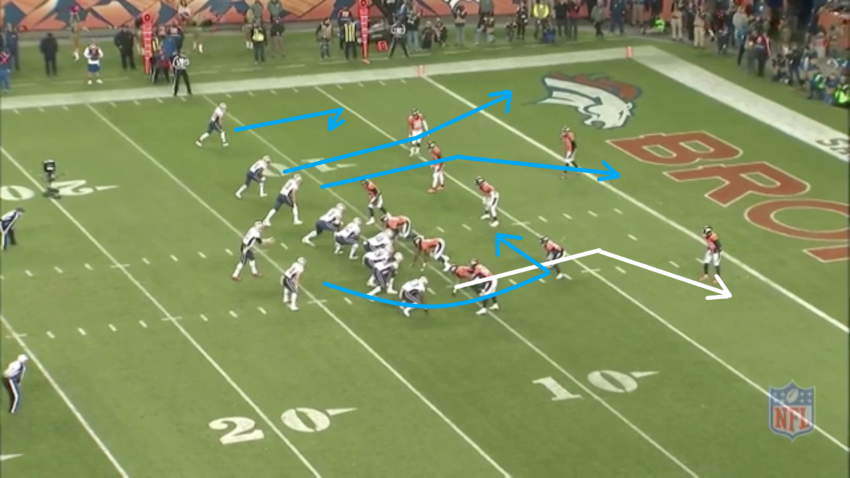 The Broncos play this look similarly to the previous example, with a linebacker driving down on Burkhead’s inside-breaking option route and defensive back Darian Stewart eyeing the deep middle. Additionally, Denver “brackets” Gronkowski’s post with a linebacker underneath and Simmons over the top with Stewart stepping in Gronkowski’s direction for additional support.

The problem: the extra attention to Gronkowski leaves Allen one-on-one with outside linebacker Von Miller, who’s known more for his pass-rushing ability than his coverage skills. Allen beats a helpless Miller, breaking away despite Miller’s grasp on his jersey, and Brady exploits the matchup for a score. 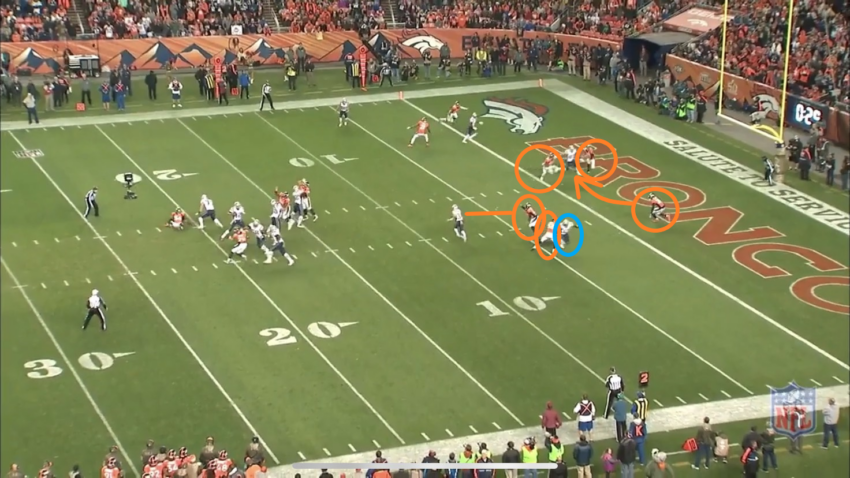 Even with Gronkowski being a superior receiving option to any tight end he’s played with by far, these “12” personnel formations still managed to create chances for both him and whoever he was paired with.

On the other hand, Henry and Smith are much more equivalent than the pairing of, say, Gronkowski and Allen, presenting formidable challenges for receivers due to Henry’s route-running ability and Smith’s exceptional athleticism. Furthermore, they’ve proven they can get open in traditional alignments or when used more as receivers, making them dangerous regardless of where they’re lined up. Together, the Patriots could wield them with devastating effects against defenses, opening up opportunities for one another and the offense as a whole.

Add their ability to create running lanes alongside a revamped offensive line, and New England’s offense already looks considerably more potent and unpredictable than it did a season ago. 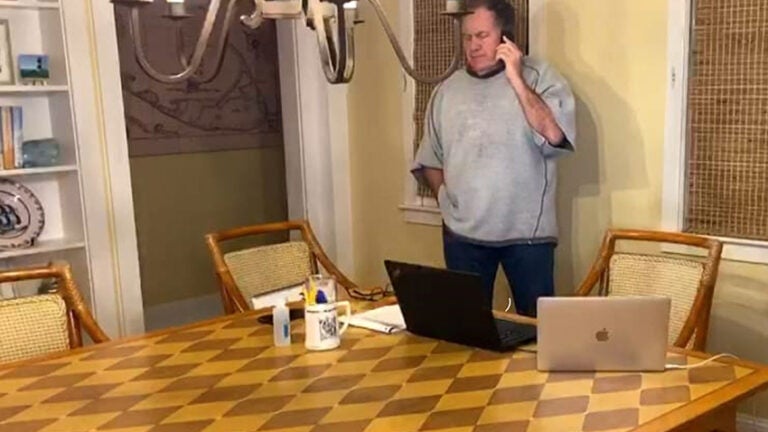