With less than a month to go until the 2021 NFL Draft, Patriots head coach Bill Belichick made the trip to Tuscaloosa to watch Crimson Tide quarterback prospect Mac Jones show off his arm at Alabama’s Pro Day on Tuesday.

But Jones may not have been the only passer Belichick was checking up on at the workout.

In addition to meeting up with old friend Alabama head coach Nick Saban, Belichick also took some time to chat with San Francisco 49ers general manager John Lynch and head coach Kyle Shanahan. The 49ers recently traded up to acquire the No. 3 pick in the draft this weekend and are widely expected to use it on a quarterback.

While it’s unclear what Belichick discussed with the two 49er representatives, their meeting is notable given the rumored trade discussions happening between the Patriots and 49ers for former New England quarterback Jimmy Garoppolo.

New England has reportedly halted their pursuit of Garoppolo, their 2014 second-round draft pick, despite some experts suggested bringing Garoppolo back was the team’s “Plan A” this offseason.

Furthermore, the 49ers still claim they see the 29-year-old quarterback as their opening-week starter in 2021. “It’s going to be hard to find a quarterback that gives us a better chance to win than Jimmy right now, especially even a rookie in the draft,” Shanahan said Monday.

New England is now said to be in no rush to strike a deal with the 49ers given Cam Newton’s position on the team. It doesn’t hurt that Garoppolo will most likely hit the market at a much cheaper rate next year, after being phased out in favor of the soon-to-be-drafted rookie.

Some experts, including Shanahan’s friend and former NFL quarterback Chris Simms, believe that rookie could be Jones, with NFL Network insider Ian Rapoport adding he would be surprised if Jones wasn’t at least a top-10 pick. With Jones’s stock rising, it’s looking highly unlikely the Patriots could be in play to select him — as experts like ESPN’s Mel Kiper and NFL Network’s Lance Zierlein have projected — if they don’t trade up from the No. 15 overall pick.

As far as Jones’s workout itself, NFL Network expert Daniel Jeremiah spoke favorably of the quarterback’s Pro Day performance during special coverage on “Path To The Draft,” saying the Crimson Tide passer looked even better than in his first workout last week.

Jones showcased his arm strength — which experts have routinely questioned during the scouting process — in Tuesday’s throwing session, including this deep connection to Heisman Trophy winner Devonta Smith.

He also overshot one or two throws, with cameras catching an unsuspecting Belichick reacting to one of them.

Still, a few missed throws don’t change the fact that Jones is in play for the 49er’s third-overall pick as an option to succeed Garoppolo this year or next, putting all eyes on the team’s quarterback situation. Including those of Belichick and the Patriots. 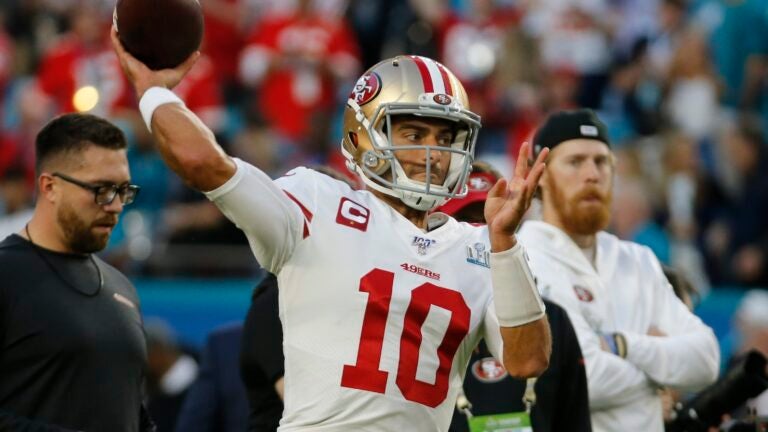