With the NFL Draft now just weeks away, draft experts around the country are shoring up their mock drafts as teams head into the final stretch of draft preparation.

One of the more popular players that’s been mocked to the Patriots throughout the offseason is Penn State linebacker Micah Parsons. Pro Football Network’s Ian Cummings is the latest draft analyst to have the Patriots selecting Parsons with their first-round pick.

Parsons is regarded as the top linebacking prospect by several experts, but where he’ll get picked in the first round seems to be all over the place right now due to potential character concerns. Parsons was named in a lawsuit filed by a former Penn State player against coach James Franklin. The lawsuit alleges that Parsons choked the player who filed the lawsuit during a fight and Franklin told that player not to report the fight to police, according to ESPN.

“Obviously, people had some concerns about things that had happened,” Parsons said of any potential character concerns during his pro day. “But at the end of the day, I was a kid. I was 17-18. We all made mistakes when we were 17-18. I’m not going to let it control or dictate the person I am now. I’m not going to let something that happened four years ago dictate who I’m becoming and the father I want to be.”

Parsons recorded a 4.39 40-yard dash and a 34-inch vertical jump at his pro day in March. The 6-foot-3 linebacker, who’s listed at 235 pounds, draws a comparison to Jaguars linebacker Myles Jack, according to NFL.com draft analyst Lance Zierlein. Zierlein praises Parsons for his range and athleticism, which he says allows Parsons to cover players in man coverage.

While the Patriots acquired linebackers Matthew Judon and Kyle Van Noy this offseason, they could certainly use some young talent at that position as Judon, Van Noy, and Dont’a Hightower are all nearly 30 or over the age of 30.

If quarterback wasn’t the Patriots’ biggest need this offseason, then you’d likely believe that wide receiver was the position the Patriots needed to fix the most.

So, while the Patriots did a lot to address their receiving issues already, they really don’t have anyone with high upside at receiver. They also haven’t received the production they were hoping for from N’Keal Harry to this point, and Julian Edelman’s future with the team is still in question after suffering a knee injury last season.

That’s why NFL.com draft analyst Chad Reuter has the Patriots selecting Alabama receiver Jaylen Waddle in the first round of his latest mock draft. Waddle is considered one of the top three receiver prospects in this draft, along with Alabama teammate DeVonta Smith and LSU’s JaMarr Chase.

This past season, Waddle caught 28 passes for 591 yards and four touchdowns over five games. He missed seven games after breaking his ankle but returned in time for the National Championship Game.

The big selling point on Waddle is his speed, which allows him to be a potential deep threat in the NFL. Because of that, Zierlein compares Waddle to Chiefs receiver Tyreek Hill, who’s known for using his speed to make tremendous plays.

Waddle could potentially be used as a returner, too. At Alabama, Waddle returned two punts and a kickoff for touchdowns over his three-year career. Waddle didn’t participate in workouts at Alabama’s pro day, so his 40-time is still unknown.

One of the very few strengths the Patriots had last season was at cornerback. Reigning Defensive Player of the Year Stephon Gilmore had another great season that earned him a Pro Bowl nod, and J.C. Jackson had the second-most interceptions in the league with nine.

However, there’s a good chance that neither player is part of the team’s long-term future. Gilmore is entering the final year of his contract while Jackson is currently a restricted free agent and could sign a one-year tender that makes him an unrestricted free agent in 2022. If the Patriots don’t have either of them in their future plans, it makes sense to draft a corner with star potential.

That’s where Jaycee Horn enters the picture. NFL.com writer Adam Rank has the Patriots selecting the South Carolina cornerback in the first round of his latest mock draft. Horn is largely considered the second-best corner prospect in this draft behind Alabama’s Patrick Surtain II.

At South Carolina, Horn wasn’t known for his ability to create turnovers, recording just two interceptions over his three years. However, Zierlein praises Horn’s versatility in his draft profile, complimenting his physicality in coverage and his experience as an outside corner and a slot corner. He compares Horn to Ravens corner Jimmy Smith.

It seems like the Patriots might be interested in Horn. They sent defensive back coaches to workout Horn at his pro day at South Carolina last month, according to Senior Bowl director Jim Nagy. 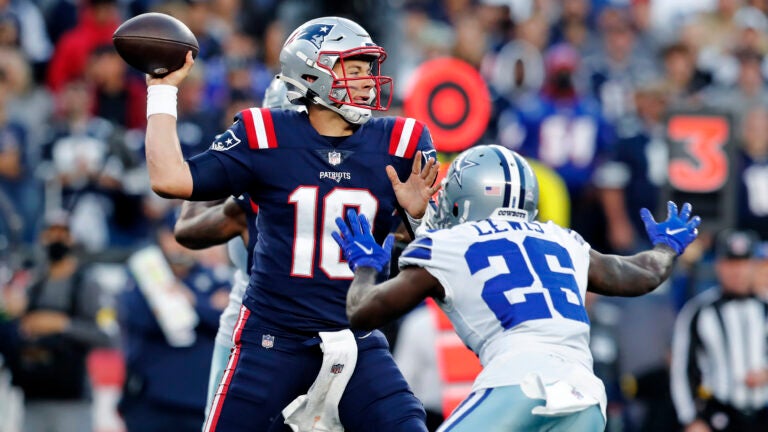