Even with Cam Newton penciled in as the New England Patriots starting quarterback for 2021, it seems everyone — including Patriots owner Robert Kraft — expects the team to add a quarterback in the upcoming NFL Draft.

Bill Belichick and Co. have been aggressively scouting this year’s quarterback class, including the five prospects many now believe will come off the board within the first 10 picks, ostensibly with that goal in mind.

Most experts tend to agree the Patriots would need to trade up to have any chance at a signal-caller, with three quarterbacks all but guaranteed to go in the first three picks and several quarterback-needy teams waiting to poach whoever falls.

That’s led some to suggest New England should try to secure the No. 4 overall pick in the draft in a trade with the Atlanta Falcons, a move that would give them a shot of selecting Justin Fields, Trey Lance, or Mac Jones (whichever one doesn’t go to the San Francisco 49ers). In particular, NFL.com’s Peter Schrager mocked just such a trade-up from No. 15 to take Fields fourth overall, thereby securing the team’s quarterback of the future.

But count longtime football columnist Peter King of NBC Sports among those who don’t see that as a likely play for the Patriots.

“I can see the Patriots trading up to pick a passer, but I can’t see them denuding two drafts to do so,” King said. “But that’s what makes this fun. Schrager will be Nostradraftus if it happens.”

King also says the trade wouldn’t necessarily make the most sense for the Falcons either, taking away a chance to either add a significant weapon for veteran quarterback Matt Ryan or to take a quarterback themselves — even if they have to sit behind Ryan for a few years.

Also, there’s that whole “28-3” thing that Atlanta would need to get over if the Patriots did make a big trade offer.

While the Patriots certainly do need to find a quarterback for next year and beyond — Newton’s contract is up at the end of the year — trading up for a franchise passer would probably require at least one first-round pick in addition to two mid-rounders from this year’s draft. That’s a heavy short-term price to pay, though Belichick has shown he’s willing to take some risks this offseason.

Trading up to No. 4 or somewhere else in the top 10 also isn’t the only avenue to improve the quedelarterback room. The next tier of quarterbacks, which includes Texas A&M’s Kellen Mond or Stanford’s David Mills, will likely be available after the first round.

In the meantime, the Patriots are still planning to attend Justin Fields’ second Pro Day this week, joining the 49ers as the only other team to do so. Only time will tell if that continued scouting of Fields and other top quarterbacks has any meaning aside from New England just doing its homework. 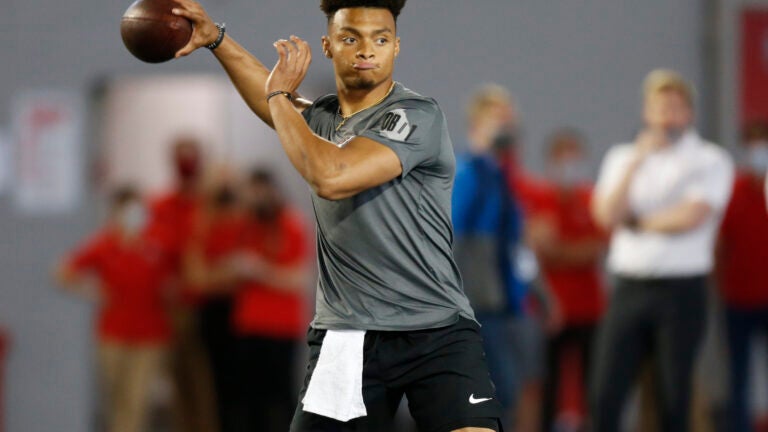