Julian Edelman’s instantly legendary catch in the Super Bowl LI comeback against the Falcons – right, that one, when the ball ricocheted off assorted limbs before he scooped it just as it was about to fall to the turf – occurred later than you might remember, with the Patriots still trailing by 8 points and just 2 minutes 24 seconds remaining in regulation. There’s no greatest comeback evah! without it

His winning touchdown against the Seahawks in Super Bowl XLIX – yes, Edelman gets credited with the win, and Malcolm Butler the save – came with just 2 minutes and 2 seconds remaining and the Patriots down by 4. There’s no “Malcolm, go!” without it.

His 51-yard dart to Danny Amendola in the 2014 conference semifinal against the Ravens – the closest thing the Patriots had to a hated rival during the second phase of the dynasty – happened with 4 minutes and 20 seconds left in the third quarter and the Patriots facing an 8-point deficit.

Oh, and he was the Most Valuable Player of the final Super Bowl win of the Tom Brady era, and we know how extraordinary a receiver’s performance has to be to beat out the quarterback for that trophy.

Yet the Super Bowl MVP performance is nowhere near the top of the list when we consider all of his exceptional achievements in the biggest moments during his 12-year Patriots career, which concluded Monday with his retirement from the NFL a few weeks shy of his 35th birthday.

So here’s to Julian Edelman, battered for the cause but never broken of spirit, possessor of that most admirable trait in an athlete: he was unfailingly at his best when it mattered the most.

Here’s to No. 11, one the greatest clutch players ever in Boston sports. And do we even need those last three words?

He was not a player of their magnitude when his entire career is summarized, but there was a little bit of David Ortiz in Edelman, some Larry Bird, a hint of Brady. He possessed absolute fearlessness at all times, but especially in the moments when players of lesser confidence, desire and talent might shrink. Edelman was small in stature, but as big as anyone on the football field when the stakes were highest. Pressure was his fuel, tension his friend.

He came through – in concert with Brady, of course – so many times that it’s easy to lose track of unheralded highlights that would be the peak of another player’s career.

In Super Bowl XLIX – during which the Patriots rallied from down 10 points in the fourth quarter, the biggest comeback in Super Bowl history until The Legend of 28-3 two years later – Edelman provided two enormous conversions on the drive that cut the Seahawks lead from 24-14 to 24-21.

The first was a 24-yarder on third-and-14 in which he got belted by Seattle’s Kam Chancellor, a human sport utility vehicle of a safety. The second was a 21-yard gain on third and 8. Both were essential at a time when the Patriots offense had to be almost perfect to have a chance.

He also delivered an almost forgotten huge play in overtime against the Falcons two seasons later. The sense at the time was that the Patriots, with all momentum (and a cookin’ Brady) on their side, would charge down the field in overtime and win the game on a touchdown.

And that is how we remember it after the fact. But the Patriots did face a second-and-13 at the Falcons 40 midway through the drive. Any concern that the drive might sputter was assuaged when Brady found Edelman for 15 yards to the Falcons 25. It was the play that made victory seem inevitable.

Tucked away behind the highlights that will be savored and seen on NFL Films programming and in the mind’s eye forever are so many smaller moments of reliability. I spent way too much ultimately fruitless time Monday night trying to figure out how many third-down conversions he made in his career. It seems like 1,000, and I’d believe that number if I didn’t know his career catch total was 620. His knack for getting 8 yards on third and 7 is paralleled by Wes Welker and Troy Brown in Patriots lore, but I bet Edelman is the one Brady trusted the most.

And why wouldn’t he? Everyone knew the ball was going his way in those situations – Brady knew, and so did Josh McDaniels and Bill Belichick, of course. The opposing defensive coordinator sure as heck knew, and so did the color analysts in the broadcast booth, and the production tech guy who was in charge of the transposed yellow first-down marker on the screen, and everyone sitting in the 300 section on down. The two defensive backs charged with blanketing Edelman – it was always two — knew too. And rarely could they do anything about it. Brady to Edelman, 11 yards, first down, over and over and over again.

I’ll leave the conversation about his Hall of Fame case to others today, except to say this: Those that dismiss it out of hand need to start paying attention. He’s second all-time to Jerry Rice in postseason receptions (118) and receiving yards (1,442). In 13 playoff games from 2014-19, he had 106 catches for 1,337 yards, winning three Super Bowl rings. If Lynn Swann, whose Hall of Fame case was largely built on balletic feats for Super Bowl winning teams, can sail in, Edelman at least deserves the highest of consideration.  For now, though, my get-this-Patriot-receiver-to-Canton cause remains Stanley Morgan.

At the very least, he has a red jacket in his future, and the guarantee that he will remain an all-time beloved Patriot. I thought he got the most glowing retirement salute yet from Belichick, topping the coach’s warm tributes to Tedy Bruschi, Troy Brown, Kevin Faulk, and recently, Patrick Chung.

“For all Julian did for our team, what I may appreciate the most is he was the quintessential throwback player,’’ said Belichick as part of a longer statement. “He could, and did, do everything — catch, run, throw, block, return, cover and tackle — all with an edge and attitude that would not allow him to fail under any circumstance. Julian Edelman is the ultimate competitor and it was a privilege to coach him.”

It was a privilege to watch him, too. Most memorably, of course, when he was once again coming through in the biggest moments when, as Belichick put it, “with championships at stake, he reached even greater heights.”

The record will show that Edelman’s last hour of brilliance was an eight-catch, 179-yard performance in Week 2 against Seattle. The record further shows that his final catch was far less noteworthy: a 13-yarder from Jarrett Stidham with 2 minutes left in a 33-6 loss to the Niners in Week 6.

It was his only catch of that lousy afternoon, and it’s probably on the short list of the most irrelevant catches of his career. But it’s also fitting in a way. Julian Edelman was out there, fighting to the end in a long-lost cause, just as he did in so many winning ones. Julian Edelman knew no other way but to give his all, in the biggest moments and the small ones too, and weren’t we ever lucky for that? 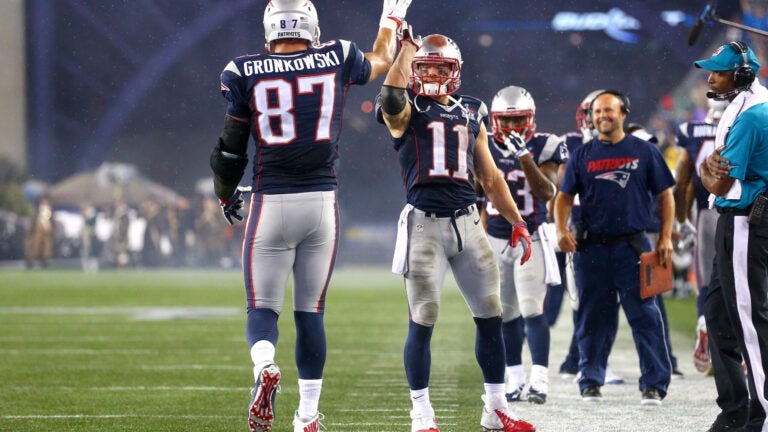