Julian Edelman’s decision to retire made waves across the football world on Monday.

The longtime Patriots receiver announced his decision to walk away from the game after dealing with multiple knee injuries over the last few seasons. Moments after he made his announcement, Patriots owner Robert Kraft and coach Bill Belichick showed their appreciation for Edelman and Tom Brady wrote a message on Instagram to send congratulations to his friend.

Several other Patriots of past and present also congratulated Edelman and reflected on the memories they shared with him. Rob Gronkowski shared a video on Instagram from his days as an NFL analyst for FOX describing what made Edelman such a good player.

“Furry. Cute. Elusive. Feisty,” Gronkowski wrote. “Congrats on retirement to the 3x champ squirrel 🐿 Honor playing with ya, whenever a big play was needed ya always came thru, my friend. @edelman11″

Longtime Patriots safety Devin McCourty, who was drafted by the Patriots a year after Edelman in 2010, thanked his now-former teammate for being a leader over the years.

“I thought our run would never end,” McCourty wrote. “…coming in a year after you and @23patrickchung I tried to make sure I could keep up with y’all. Thanks for giving me the confidence to not care about anything other than getting the job done. You never cared about stats, or what anyone thought u cared about winning. Just being around you made ppl better cause you forced that dog to come out…keep being an amazing father…Legendary flying squirrel”

I Enjoyed it all brotha! I’ll be waiting for my invite to the ceremony✊🏾💪🏾 🐿 https://t.co/WUACVNUasX

Running back James White said he’ll miss him on the field and in the locker room.

“Gonna miss you out there on the field bro! And your freestyles in the locker room 😂 it’s been a pleasure bro!” White wrote.

“One of the most incredible professional athletes and game time competitors,” Amendola wrote in an Instagram post. “In the basement, in the street or in the 4th quarter of the biggest game. No matter what we do we gotta believe. Thanks for being you Squirrel. Unbelievable career. Unbelievable friend.”

Patriots center David Andrews shared a picture of him and Edelman hugging after the Patriots’ Super Bowl LIII victory and thanked him.

“To one of the toughest and best teammates I’ve ever had! Thanks for all the memories BUBS!” Andrews wrote.

Former Patriot and ESPN NFL analyst Rob Nikovich said Edelman is “One of one.”

Whatever you think of Jules and accolades, he’s one of the most important Pats of all time.

Several players around the league also congratulated Edelman, including Titans receiver A.J. Brown, who said he grew up watching Edelman.

Legend ! Grew up watching you . Blessed that I was in a position to talk to you and watch you work during camp . Respect! 🐐 https://t.co/di8tUDEaLN

“What a career brotha congratulations on a successful career,” Bryant wrote.

Edelman received congratulations from a pair of celebrities, too. Jon Bon Jovi, a friend of Kraft and Belichick, and Massachusetts native Mark Wahlberg sent Edelman their congratulations.

“Jules, you’re a warrior… and an inspiration…” Bon Jovi wrote. 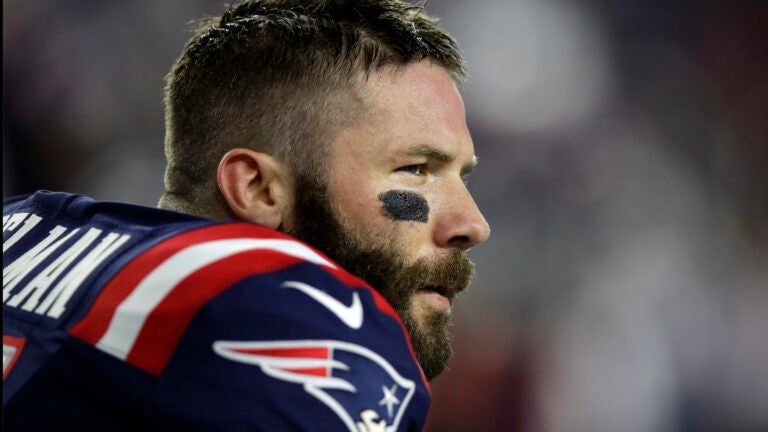 ‘I caught it. Crazy, I swear to God’: Julian Edelman’s 5 best plays as a Patriot