You know when organizations say “there’s no replacing” a certain player when they’re not on the field because there’s almost no perfect way to quantify the impact they make for their team?

One of the very latest picks in the 2009 NFL Draft, the undersized former college quarterback turned himself into a Patriots legend through his versatility, toughness to play through pain and injury, and postseason performances that will remain part of Patriots lore for all time.

Even if some point out that Edelman doesn’t have the elite credentials many look for in future Hall-of-Fame candidates, one can’t deny that he was flat-out a really good football player who made himself an integral contributor in the Patriots’ dynasty resurgence over the last decade. And New England will have some work to do to figure out how to fill the void he leaves behind.

Here are a few things New England will miss most on the field when they line up without their stalwart slot receiver next season.

He was the ultimate security blanket.

While Rob Gronkowski was generally the most dominant receiving option the Patriots had during his time in New England, he wasn’t the one Tom Brady looked to the most.

That would be Edelman.

Since the 2013 season, when Edelman took over as the starting slot receiver, he only failed to lead the Patriots in targets and receptions twice in seasons he played — he missed 2017 with a torn ACL. In fact, Brady completed more passes to Edelman (571) than to any receiver in his legendary (and still ongoing) career.

Edelman was on pace to have a similar year last year with Cam Newton if he’d stayed healthy — his 39 targets and 21 catches through the first six games of 2020 easily outpaced the rest of the Patriots’ receiving corps.

While the likes of Jakobi Meyers, Nelson Agholor, and Kendrick Bourne all would have been healthier and likely more effective options than Edelman would have been this coming season, none of them have proven the kind of reliability he did to get open play after play. Even with Hunter Henry and Jonnu Smith expected to play big roles this year, history suggests New England still needs to find out which receiver the team wants to lean on when it’s time to move the sticks.

He owned the middle of the field.

Playing out of the slot isn’t always a glamorous job, and chances are you’re going to take your share of big shots when you play there.

But it’s where the 5-foot-10, 200-pound Edelman did his best work throughout his career.

Brady to Edelman across the 50! #NFLPlayoffs

A glance through Edelman’s Pro Football Focus profile shows he was consistently one of the league’s elite pass catchers between the numbers, routinely grading out in the 90th percentile or above on his targets over the middle.

Even in an injury-shortened 2020 where he wasn’t at his best, Patriots quarterbacks had passer ratings of 95.8 and 102.1 when targeting him in the deep middle (20+ yards down the field) and intermediate middle (10-19 yards), respectively. During his best season (2019), 693 of his 1,117 receiving yards came on throws to the middle of the field, with 175 of those yards coming after the catch.

For a bit of perspective, Edelman’s 175 yards after the catch between the numbers in 2019 were more than any Patriots receiver aside from Jakobi Meyers generated in total, from everywhere on the field, last year.

His strength and agility made him a tough cover on those types of routes, and his tenacity after the catch had a knack for springing him for bigger plays than expected. It’s fair to wonder if the Patriots have that kind of guy on their roster with Edelman hanging up his cleats. If 2020 was any indication, they could use one.

He could play anywhere and everywhere you needed.

The story goes that Bill Belichick said the following when he told Edelman the Patriots were drafting him on draft night in 2009: “We really don’t know what you are going to play, but we know you can play football.”

While the former Kent State quarterback eventually went on to become the second-leading receiver in franchise history, his willingness to do anything can everything to win football games was among his most defining characteristics.

He earned his way onto the field with his special teams skills, returning a punt 75 yards for a touchdown in his very first preseason game and inspiring Belichick to ask Wes Welker if the latter knew who Wally Pipp was. He went on to score four punt-return touchdowns in his career as well as scoring on a fumble recovery and throwing for two touchdowns.

Edelman even played cornerback for a play or two in a pinch.

With less than two minutes to go and a trip to the Super Bowl on the line in the AFC Championship game in January, 2012, who did the Patriots count on to cover the great Anquan Boldin in the slot?

He now retires with the fourth-most scrimmage yards (9,869) in franchise history, a testament not just to his pass-catching prowess but to his value as an all-around player.

Not bad for a seventh-round pick who came into the league without a position. Sometimes, as Belichick said, you just have to know how to play football. 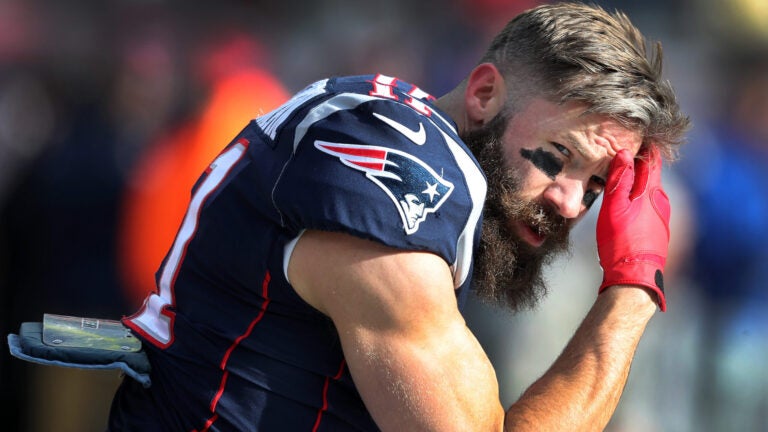