Over the last couple of weeks, numerous draft experts have the Patriots doing something that’s out of the norm: trading up in the draft.

In particular, several mock drafts have the Patriots trading up (one has them moving up to as high as the No. 4 pick) to select Ohio State quarterback Justin Fields. Quarterback is certainly a need for the Patriots, and while some question if the Patriots would actually trade up in the draft, ESPN NFL analyst and “Monday Night Football” commentator Louis Riddick isn’t ruling it out.

Riddick, who played for Bill Belichick when he was the head coach with the Browns, acknowledged that while the Patriots haven’t traded up in the first round since 2012, he thinks Belichick is willing to be aggressive, citing this offseason’s free agency signing spree as an example.

“Bill is as economically driven as anyone,” Riddick said on ESPN’s “Get Up!” “He’s someone who exploits market inefficiencies as well as anyone. He’s someone who understands the prices required to move up and down the draft in order to get in the position to get the people he wants, whether they’re a good player or not, as well as anyone. I think if the price economically makes sense, he’ll be a player. There’s no question about it. Do not think that this man is very conservative and cheap guy who’s always going to look for the tremendous value. He showed this year he will exploit a market inefficiency as well as anyone. He will just blow your doors off with it. He came out of the gates humming in free agency.”

Whether or not the Patriots actually end up with Fields or another quarterback in the first round remains a question, but Riddick believes that Josh McDaniels wasn’t at Fields’s second pro day on Wednesday without reason.

“I’m sure right now [Belichick’s] trying to figure out, ‘What would I need to do if this young man – particularly Justin Fields – starts falling?’,” Riddick said. “There’s no doubt that Josh was out at that workout yesterday to say, ‘Hey, let’s make sure we look at this young man so we know exactly what we would be getting.’ They both were at Mac Jones’s pro day in Tuscaloosa, talking to Nick (Saban) and getting the requisite information down there. They’re covering their bases. If it makes sense, New England will strike.”

Fellow ESPN NFL analyst Booger McFarland believes what the Patriots do at quarterback might come down to what the 49ers do with the No. 3 pick. McFarland thinks that if Jones is the pick at three, the 49ers would be more inclined to move on from Jimmy Garoppolo, making it possible for the Patriots to trade for him.

Either way, McFarland thinks the Patriots should add a quarterback in the draft or via trade.

“If you’re New England, they can’t be happy based on where they are,” McFarland said. “They brought Cam Newton back, but it’s a deal that very team-friendly. It’s not a ton of guaranteed money there. If I’m Josh McDaniels and I’m Bill Belichick and I go back and watch the film and watch Cam Newton, physically, he can still do some of the things he did in 2015, but he’s nowhere near the quarterback that he was the year that he won the MVP. That’s an anomaly.

The Patriots currently hold the No. 15 pick in the NFL Draft. 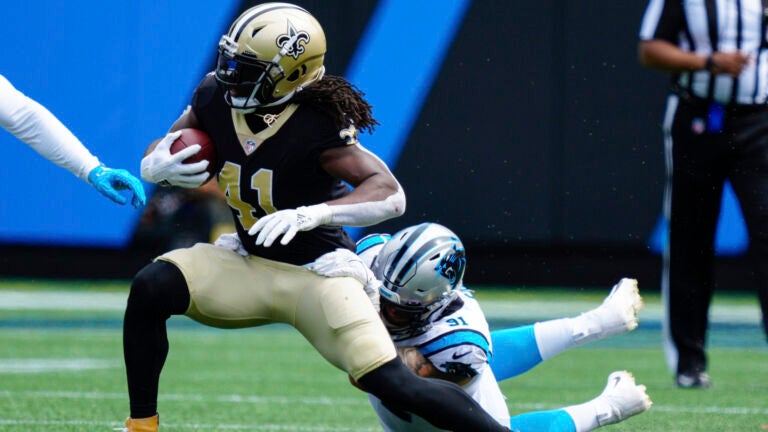