No one has pounded the table for the New England Patriots to select a first-round quarterback in next week’s draft harder than ESPN’s Mel Kiper Jr.

The draft expert has sent a quarterback to the Patriots in all five of his mock drafts thus far, thrice mocking Mac Jones to New England — the latest example coming on Tuesday — while also including separate scenarios in which Bill Belichick trades up to take Trey Lance and Justin Fields.

Three quarterbacks are all but guaranteed to go within the first three picks, meaning a trade into the top 10 will almost certainly be necessary to secure one of the remaining two prospects — which could be any combination of Jones, Fields, or Lance.

With Cam Newton only on a one-year deal and stiff competition in the AFC East, Kiper said Patriots should “absolutely not” stay at No. 15 overall if they have a chance to trade for a quarterback during a conversation with fellow NFL draftnik Daniel Jeremiah on NFL Network.

“This is not the Tom Brady era. Tom Brady is now a Tampa Bay Buccaneer winning a Super Bowl,” Kiper explained. “[Jeremiah] talked about Josh Allen’s emergence as a superstar in this league. You have Tua at Miami, now Zach Wilson [likely] with the Jets. You gotta out of that cellar for quarterback situations and go get the guy.”

Though Justin Fields was the first name he mentioned among the three prospects he believes the Patriots should target, he said New England should prepare to bid on “whoever” is left of the group drafted after Trevor Lawrence and Wilson, the expected first and second picks in the draft.

“Two will probably be there if Atlanta passes on one,” Kiper continued, noting the Detroit Lions, who hold the No. 7 overall pick, might be an ideal trade candidate for the Patriots to move up from No. 15. “Figure out which guy you love the most, DJ, be aggressive if you’re the Patriots, and go get him.”

Jeremiah agreed, arguing as he has before that the Patriots, who bolstered their receiving corps, offensive line, and defense in free agency to go with an already-strong running game, have a good situation for a young quarterback.

“They’re going to get a chance to get an upgrade at the position. It’s also going to come on that rookie contract, which will be cheap and affordable for them,” Jeremiah said. “They have a good defense that’s ready to win right now. I think they can play a young quarterback and not have to put a lot on his shoulders. Let him run around, make some plays as he’s learning and developing. Let the defense and special teams carry you a little bit there. I like that idea.”

The opening round of the NFL Draft will take place next Thursday. 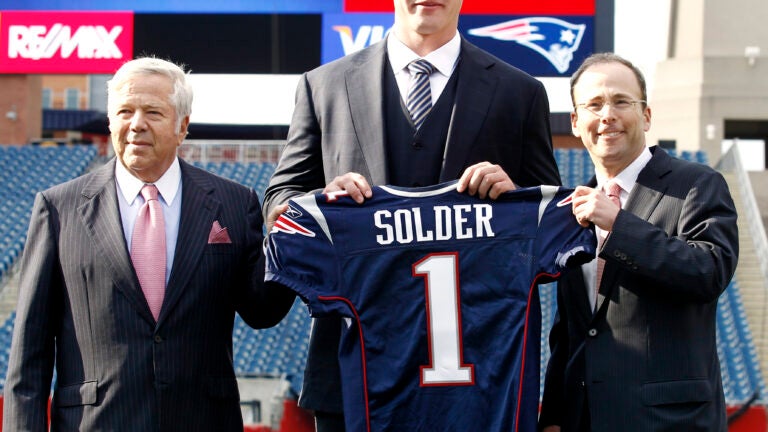