Bill Belichick isn’t known for his aggressiveness in the NFL Draft, having traded up just three times in the first round during his 20 seasons as New England’s head coach.

What’s more, the highest quarterback he’s drafted in all that time is Jimmy Garoppolo in the second round back in 2014  — not that Belichick’s needed a new quarterback with Tom Brady leading the charge in 18 of the 20 years he spent in Foxborough.

But The Athletic’s Dane Brugler believes the Garoppolo pick might have a hidden relevance toward the Patriots’ draft strategy at quarterback this year.

Like many NFL analysts these days, Brugler was asked to discuss the likelihood of Belichick and the Patriots trading up in the draft for a quarterback with “Toucher and Rich” on 98.5 The Sports Hub Thursday morning.

While noting Belichick’s typical indifference toward quarterback prospects in the past — Garoppolo and Jacoby Brissett, taken in the third round of the 2016 draft — Brugler suggests the timing of the Garoppolo pick could signal Belichick’s willingness to break the mold once again.

“Maybe the fact that he did spend a second-round pick on Jimmy Garoppolo when Tom Brady was still playing at a high level tells you he is ready to be aggressive if the right value is there, if the right quarterback is there,” Brugler said.

With Brady gone and Cam Newton only on a one-year deal that doesn’t guarantee him the starting job, many draft experts, including Brugler, see now as a time to make a splash in the draft at quarterback. That would likely require the Patriots to trade up, with few expecting any of the top five quarterbacks to last past the 10th overall pick.

The San Francisco 49ers – Garoppolo’s current team – could shape the draft with their pick at No. 3 overall, with Brugler adding that many teams reportedly believe either Mac Jones or Trey Lance, not Justin Fields, could be the pick. That could prime Fields for the kind of draft-day slide many have predicted for the last month.

“Let’s say at No. 3, Mac Jones is the pick of the 49ers. Let’s say Trey Lance goes 4,” Brugler said. “The Bengals aren’t taking a quarterback at five. The Dolphins aren’t taking a quarterback at six. Seven and eight, that becomes the sweet spot where maybe a team looks to trade up, and the Patriots are certainly in that conversation as a possibility. Justin Fields, if he’s there, do they like him enough to make that investment? That’s what we’re guessing at right now.”

If the Patriots don’t move up for Fields or another quarterback that might become available, Brugler also says the Patriots could look for a second-tier quarterback like Kellen Mond, David Mills, or Kyle Trask on Day 2 of the draft. 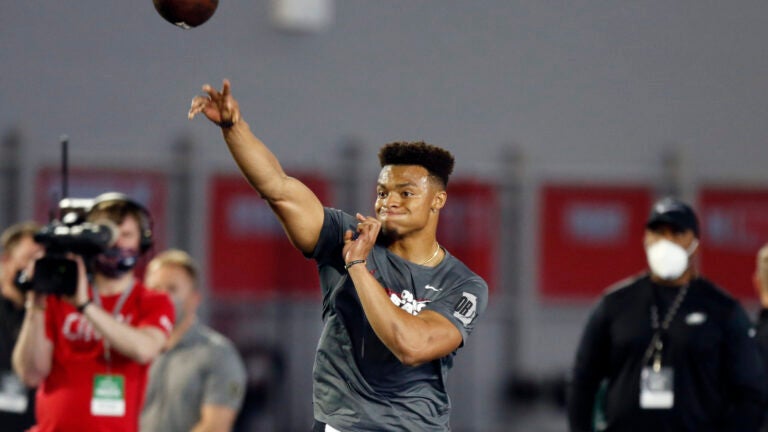