Jimmy Garoppolo might not be the only high-profile veteran the Patriots explore on the trade market this offseason.

According to Ian Rapoport and others, the Atlanta Falcons are reportedly listening to trade offers for star receiver Julio Jones, the franchise’s all-time leader in receiving yards. The 32-year-old Jones has been one of, if not the best, receiver in football since entering the league in 2011 but played just nine games last year due to injury.

With the Falcons desperate to stay under the salary cap and quarterback Matt Ryan still owed a tremendous amount of money over the next two seasons, Jones could be a cap casualty for Atlanta.

The #Falcons have received calls from teams inquiring about possible trades for All-Pro WR Julio Jones, sources say. A trade could not happen for cap reasons before June 1, but teams know Atlanta’s brutal cap situation and are calling. A deal won’t happen now, but later? Maybe.

NBC Sports’ NFL writer Peter King addressed the rumors surrounding a potential Jones trade in his Football Morning in America column Monday and gave a list of teams that could be most interested in acquiring him. That group includes the Patriots.

“As for the interested team or teams, I would guess Las Vegas; Jon Gruden couldn’t resist Antonio Brown, and I doubt he could resist Julio Jones. New England too, and a couple of teams with clear receiver needs—Tennessee and Baltimore,” he wrote.

King notes that a deal for Jones is far from assured, saying the Falcons “don’t really want to trade” their greatest receiver. But doing so would allow Atlanta to spread out the $23.25 million he’s owed over the next two seasons, which could give them much-needed cap relief. The Falcons also hold the No. 4 pick in the draft this year and could select an elite pass-catcher like Kyle Pitts or Ja’Marr Chase to eventually succeed Jones.

Furthermore, Atlanta must wait until June 1 to trade Jones in order to split his cap hit across the next two years, meaning there might not be a swift resolution to this particular saga.

Most Receiving Yards per Game in NFL history:

King’s musings also aren’t a concrete report that the Patriots are one of the teams that have called the Falcons about Jones. But it wouldn’t be the first time Belichick traded for an elite receiver needing a change of scenery, having done so with a 30-year-old Randy Moss back in 2007.

Of course, Jones will likely cost more than the fourth-round pick New England sent to Oakland for Moss back in those days. But former NFL coach Jim Mora Jr. told Sports Illustrated Monday the price tag might not be too outlandish if the Patriots really wanted the 32-year-old receiver.

“Sometimes if there’s a real feeling in a room that we need to trade a guy…the closer you get to the draft, the less you’re going to have to pay for that guy unless there are multiple suitors,” Mora explained. “The fact that you’re talking about an NFC team and an AFC team maybe making a move, I think that makes sense as well.”

While little is known about the Patriots involvement in Jones’s trade talks at the moment, there’s no doubt his addition would vastly improve New England’s offense. 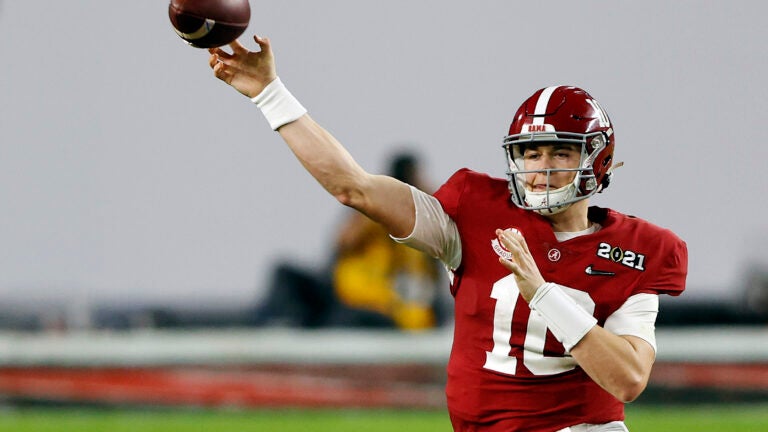