Who are the Patriots’ worst draft picks since 2000?

Ahead of the 2021 NFL Draft beginning Thursday, we’re revisiting every one of Bill Belichick’s selections to determine which players the team should have thought twice about.

To build the list, we used production, expectations, and overall impact — or lack thereof — on the field.

In the end, there may be worse players who were drafted later than these guys, but considering where they taken — and consequently, what was expected of them — these stand as the instances where Belichick would almost certainly request a mulligan.

Disclaimer: We’re not including the last two draft classes to account for development.

The first draft pick of the Belichick/Scott Pioli era was a disappointment as a player, as he was unable to shake a myriad of injuries (leg, elbow, ankle, and foot) that limited him to only 10 career starts. To his credit, he’s found an excellent second stage of his football life, going on to work as an offensive line coach with the Steelers.

One of three wide receivers on this list who wore the No. 17 (coincidence?) Dobson was taken 59th overall as part of a pretty good draft that included Jamie Collins, Logan Ryan, and Duron Harmon. And while he had more good games that you probably remember (five catches for 130 yards and a pair of touchdowns in his rookie year against the Steelers), he never seemed to display a sense of urgency in important moments. He ended up playing three years with the Patriots, and caught 53 passes for 698 yards and four touchdowns. One thing that surprised me? He’s only 29.

Let me make this really clear: it’s my belief Richards was overdrafted and thrown into situations where he wasn’t able to execute. (Oftentimes, those missteps came on the big stage, which only magnified the fact that he was overmatched.) If Richards was a Day Three choice, the level of expectation would be lessened, and he probably wouldn’t be on this list. But as a second-round pick, his career fell way short of expectations.

The 53rd overall player taken that spring (one of three Florida Gators), Cunningham washed out quickly with the Patriots. Kicked around a bit after he was let go by New England, including a brief stint with the Jets.

The outside linebacker, taken 78th overall, was projected as the next great young pass rusher, a long and lean guy projected to be in the mold of Willie McGinest. But the Michigan product struggled to stay healthy in his relatively short NFL career. He played in six games in 2010, finishing with four tackles (two solo) and 0.5 sacks.

O’Connell was arguably the first quarterback drafted in the Tom Brady era that had a legitimate shot at developing as a legit NFL signal-caller. But by his own admission, he was complacent and didn’t study like he should have. It ended in just two games, with him going 4-for-6 for 23 yards. A few years ago, O’Connell expressed regret that he didn’t take advantage of the situation like he should have. Like Klemm, he’s had a great second act as a coach — he’s the Rams’ offensive coordinator.

Everything was pointing in the right direction: Jones played for noted Belichick bud Nick Saban at Alabama, and he had a special teams background as a returner. Golden, right? Sadly, Jones never seemed to fit with the Patriots. He spent a season-plus with New England and was an adventure as a returner. He ended his career with the Ravens.

Dowling was taken with the first pick of the second round — 33rd overall — but never seemed to click in New England, playing just nine games in two seasons. Making the choice all the more painful was the recent revelation the Patriots were thinking about taking Richard Sherman at the spot, but opted for Dowling instead. Ouch.

The Patriots signed or drafted roughly 423 defensive backs between 2007 and 2009 in hopes of trying to find the right combination in the secondary. Wheatley wasn’t necessarily better or worse than any of them, but just seemed to embody their inability to draft and/or develop anyone at the position for those three years.

Wheatley had a respectable rookie year as part of a cornerback rotation, but suffered a wrist injury and soon fell off the radar. He struggled to see the field in 2009, and then was injured again in the preseason the following year, which ultimately led to his release during the season. The Patriots would eventually find the right formula in the secondary — they added Devin McCourty, Logan Ryan, Duron Harmon, and Malcolm Butler between 2010 and 2014 — but it took them a while to get there.

The 2010 draft was chock full of success stories for the Patriots: McCourty, Rob Gronkowski, Brandon Spikes, etc. Price, taken 90th overall, wasn’t one of those. He played in six games in the NFL and caught five passes. You know when I knew he wasn’t long for Foxborough? A year after he was drafted, he had a series of apparent scratches. I asked Brady about Price’s development and how close he might be to seeing the field. Instead of taking the opportunity to pump the tires of a young receiver and speaking glowingly about his future, Brady downshifted and said something about “how we all have to do better.” Shortly after that, he was waived by the Patriots.

Jones’s career started promisingly enough — 18 starts in his first two seasons. But after offseason knee surgery between the 2002 and 2003 seasons, a wild off-field run began, one that included an arrest for allegedly assaulting his roommate with scalding water in 2003. The Patriots released him soon after that, and in later years, he was charged with possession of a concealed firearm and resisting arrest. In March 2008, he was arrested (while playing in the Arena Football League) after police said he tried to urinate on the dance floor at a club called The Blue Martini in Tampa, Fla. In July 2008, he was also picked up in a drug sweep in Tampa.

Easley was positioned as the next Vince Wilfork when he was drafted; his college tape had fans drooling. At the University of Florida, he was capable of shedding double teams, while also being nimble enough to generate pressure. While there were flashes of that as a rookie, knee issues — which caused him to drop — left him on the shelf for large portions of the 2014 and 2015 seasons. He was released in April 2016. He’s had a decent second act with the Rams, but his performance has certainly fallen short of expectations.

Johnson had terrific straight-line speed but could never really put it all together in his relatively short stint in New England. The 45th pick in the 2003 draft was absolutely electric at times — he returned a pair of kicks for touchdowns and averaged 15 yards a reception — but drove teammates and coaches nutty with his inconsistencies. He had a really good rookie year, averaging a whopping 28 yards per return on kickoffs, one of the top seasonal marks in franchise history. But there were just too many busted plays to count, especially on offense. He was traded to New Orleans in 2005 for another underachiever in Jonathan Sullivan, and bounced from the Saints to the Vikings to the Eagles to the Texans. He spent the 2007 season out of football, and in 2008, a brief comeback with the CFL’s Toronto Argonauts ended after four months when he was released.

Everyone has a Maroney story: There was the fact that, after the Patriots drafted Maroney ahead of Joseph Addai, Peyton Manning texted Brady and said “You got our running back.” There was the time when Maroney compared the New England stable of running backs to the cartoon “Voltron.” Or showed up with a necklace with a Kool-Aid man pendant in diamonds, a nod to his nickname .

But the genial running back always simply seemed content with the fact that he had simply made it to the NFL. And with the way that Belichick and the Patriots cycle through running backs, that complacency will ultimately doom your career in New England. The truth is Maroney had fair seasons in 2006 and 2007 if he was a mid- to late-round pick, but just over 1,500 yards over two seasons isn’t the kind of production you’re looking for from a first-round running back. (There was also the maddening tendency to run East-West as opposed to North-South, which did nothing to endear him to fans.) He was dealt to the Broncos in 2009.

Everything was in place for Jackson to be a breakout star in New England — the 6-foot-1, 223-pounder was a Florida star under Belichick pal Urban Meyer. He had great footwork and agility and excellent straight-line speed. The Patriots traded a second- and third-round pick to the Packers to go up and get him. But in 14 NFL regular-season games with the Patriots, the 36th overall choice had 13 catches for 152 yards. Jackson seemed to see the writing on the wall in the months before he was let go by the Patriots: In an interview with reporters the summer before he was cut loose, he was asked if he had any advice for future rookie receivers in the New England system. His reply? “Yes. Don’t get hurt.” 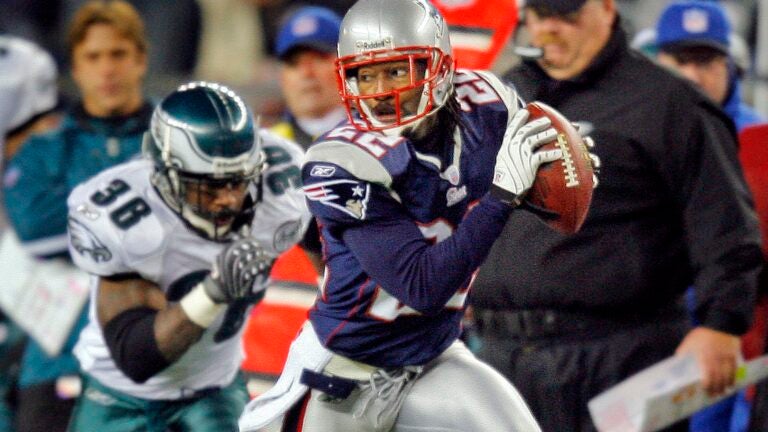