After all the buildup, Bill Belichick got his man without even having to make a move.

Mac Jones is now a New England Patriot after falling to No. 15 — a somewhat surprise move after he was rumored as a possibility at No. 3 overall to San Francisco.

The young man who says he secretly wanted to play for the Patriots all along got his wish. And his skill set, which many have compared to Tom Brady in the lead-up to the draft, couldn’t fit New England’s projected offensive plan better if it tried — even if he lacks the stellar athletic ability teams are increasingly valuing in quarterbacks.

Here’s a look at what makes Jones an ideal pick for the Patriots and what making him the eventual quarterback of the future would mean for the franchise.

He can stand and deliver.

In an era of big-armed quarterbacks who can run 4.5 40-yard dashes, Jones’s greatest skill is a simple one: get the ball where it needs to go. Quickly.

He also threw just four interceptions on 402 passing attempts against 41 touchdowns en route to guiding one of the best college offenses in recent memory.

To an extent, it’s what you should expect from a good quarterback playing in one of the most quarterback-friendly situations you can construct.

Four of Jones’s offensive teammates — receivers Jaylen Waddle and Heisman Trophy-winner DeVonta Smith, running back Najee Harris, and left tackle Alex Leatherwood — all came off the board in the first round of Thursday’s draft.

On top of that, Jones ran a lot of one-read RPOs, short throws, and simple concepts meant to get the ball out of his hands and create mismatches for the elite playmakers around him. 22.5 percent of his yards last year came on RPOs and screens, which should pump the brakes on any ideas of Jones running anything unparalleled at the college level.

Still, he proved extremely proficient at processing his reads quickly and making decisive throws. Very rarely did he make the wrong decision with the football, producing a minuscule number of turnover-worthy plays.

That intelligence and poise drew Belichick to Jones as did the young quarterback’s affiliation with his old friend Nick Saban at Alabama, for whom Belichick holds the utmost respect.

“He’s a smart kid,” said Belichick of Jones. “He’s been in a system that’s similar to ours. We’ve had a lot of good conversations with him. I think he’ll be able to process the offense. It’s obviously going to take a lot of time. We’ll see how it goes.”

He knows his limits.

A first glance at Jones compared to the other four top quarterbacks in the draft shows you immediately that one of those things is not like the other.

Jones certainly does not have the physical profile people have come to associate with elite quarterback prospects.

He has decent but not great size (6-foot-3-inches, 214 pounds). He probably has better speed and agility than people think when they see him, but he’s essentially got the same athletic profile as new teammate Jarrett Stidham.

And he doesn’t have anywhere near the arm of any of the four prospects taken before him, who made track-shot-type throws both at their Pro Days workouts and in games that Jones can only dream about.

Will any of that stop him from succeeding as the quarterback of the New England Patriots? Not necessarily.

Jones racked up a monster 1,355 yards on deep throws last year — again leading the FBS — proving that elite arm strength isn’t always the key to stretching the field. Instead of a transcendent arm, Jones relied on good timing and ball placement as well as his receivers’ abilities to win their matchups.

When you watch his tape, you can see how well he plays within himself and generally avoids taking risks or making throws beyond his measure. His average depth-of-target last year was just 8.8 yards (tied for 108th among FBS quarterbacks), but there was little need to chuck the ball down the field when there were plenty of underneath options that could move the sticks.

Every once in a while, the lack of raw arm strength did get Jones in trouble. For example, he underthrew Smith on consecutive deep balls against Kentucky — the second of which was intercepted — that should have been touchdowns. On other occasions, he tried to fit balls into tight windows only to see them batted down or nearly intercepted.

But for the most part, the soon-to-be Patriots rookie overcame his lack of amazing physical gifts simply by thinking quickly, sliding in the pocket just enough to avoid pressure, and throwing the ball on time and on target.

Not unlike another guy who had a lot of success here not long ago.

Cutting through the noise

So how much of Jones’s success last year was about him and how much was about his NFL-caliber supporting cast and coaching at Alabama?

Well, you can’t deny that having four first-round picks on your offense — one of whom won the Heisman and the Biletnikoff Award for the best receiver in college football — had to have helped. Alabama’s offensive film is almost laughable with how many receivers are running wide open, whether due to individual skill or the Crimson Tide’s passing scheme. Jones rarely had to make difficult throws against tight coverage, having attempted just 44 throws last season into a “tight” window.

How will he perform in the NFL, where throwing lanes are smaller and the competition is much faster and more experienced than in college?

Is he capable of making “off-platform” throws to get the ball around defenders or to make plays while avoiding pressure?

And is he really as “NFL-ready” as suggested given how much of his production came on relatively simple concepts and short, easy completions?

The bottom line: Jones is not a special talent. Nothing about his physical profile or throwing ability is elite. And though most agree he’s a better quarterback prospect than his predecessor Tua Tagovailoa, the latter’s up-and-down season with Miami last year gives one pause given the similarities in the two quarterbacks’ skill sets and the system they came from.

But Jones does not need to be a special talent to be the Patriots’ quarterback of the future. It’s not like Tom Brady was coming out of college, either.

He just has to do what he does: think quickly, play mistake-free football, and put the ball in his playmakers’ hands. That is exactly what the Patriots loved about Brady, and it’s exactly why Belichick jumped at the chance to get Jones when he fell to No. 15.

The revamped offensive attack the Patriots are constructing, adding pass-catchers Hunter Henry, Jonnu Smith, and Nelson Agholor to an already strong running game, provide an excellent structure for Jones to maximize his talents for distributing the ball and simply play within himself and New England’s system.

If he can do that better than Cam Newton this season — Belichick flatly pronounced Newton is still the favorite to start heading into camp — Jones might even find himself taking over the starting gig at some point this season. But even if he redshirts the 2021 season, he’ll still be in an ideal position to hit the ground running in 2022.

Jones might not be a generational prospect like any of the quarterbacks taken before him. But it’s hard to imagine a quarterback prospect that screamed “New England Patriots” more than him. 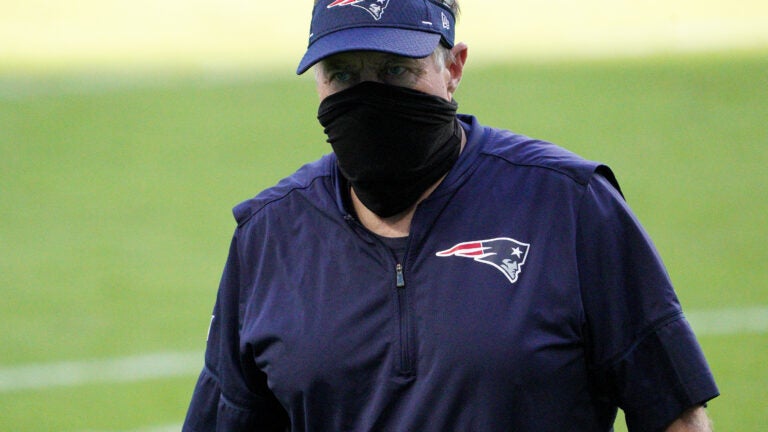 ‘I missed a lot of those mock drafts’: Bill Belichick discussed the Patriots’ first round strategy