After months of speculation and scrutiny, the moment of truth finally arrived for Bill Belichick Thursday night with the Patriots on the clock with the No. 15 pick in the NFL Draft.

But before he made his move, he called on everyone in the room who put in work scouting this year’s draft class, including Dave Ziegler and Matt Patricia and asked, “We’re all good on this?”

Only after several affirmatives did he have a staffer ring Alabama quarterback Mac Jones with the news: the Crimson Tide signal-caller was about to officially become a member of the New England Patriots.

A video posted from the Patriots’ social media account gives fans an inside look at the solemn moments leading up to Jones’s selection and his welcome from both Belichick and owner Robert Kraft.

“All of New England is really happy with this pick.”

“Looking forward to working with you,” Belichick said to Jones after telling him he’d be the pick at No. 15. “A lot of ‘Tides’ up here…you’ll fit right in.” (Jones is now the 11th Nick Saban-coached player Belichick has drafted during his time with the Patriots and joins his old teammate Damien Harris, who was thrilled to see his former quarterback on the squad.)

Jones also became the first quarterback ever drafted by Belichick in the first round of the draft.

After their brief talk, the Patriots coach then handed off the phone off to Kraft, who praised Jones’s intelligence and character.

“They tell me you’re a phenomenal person, a great guy,” the owner said. “The academics in my family like that you have a 4.0 GPA…anyway we’re excited to have you. All of New England is really happy with this pick.” 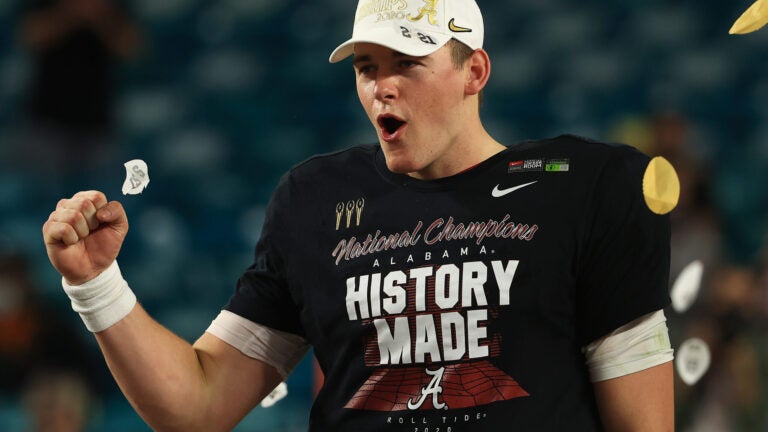